Having submitted a contest log in previous King-of-Spain Cw GiGs keeps me on the mailing list
for up-coming King-of-Spain contest events.  Experiencing exhaustion from 7 straight weekends
of radiosport action, I decided to dial this weekend back using it to make preparations for next weekend's CQ WPX (Weird Prefix) contest.

In recent weeks, I have been experimenting with various ways to combine different external audio filters by way of a switch box and various stereo pin-plug => RCA converter cables.  Doing this brought a number of unexpected discoveries on how certain things are actually wired.

When I bought this switch on eBay, I made the assumption that all switched outputs were separate.  In fact, if you look at the schematic closely, ALL +Lines on each side (L & R) are physically wired together, independent of the switches.  The switches switch ONLY the -Lines.  OOOPs! 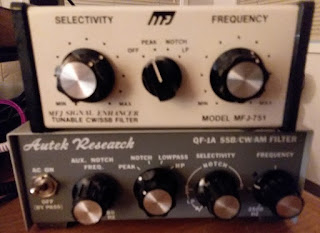 In recent months, experimenting
with various "flavors" of audio filter combinations for stereo-Cw, I have relied on short 1/8"-female to RCA plug converter cables to split the input audio - one unit for each ear.  The output RCA connections are then recombined into another 1/8" stereo female jack.

Unfortunately, this configuration wasn't producing the usual left-to-right separation I was expecting - time to bring out the DVM.  Using the DVM's audible-buzzer, an incredible discovery was made.

Luckily there were a set of replacement (albeit longer) splitter cables in the junk drawer, bringing true Left-Right stereo cw back to my ears, allowing me to get down to the business of the King-of-Spain Dx contest.  By my 23:15z contest start, station #1 (@NX6T) had it's long-time ACOM 2000a removed in preparation for a replacement Expert 1.5Kfa amplifier.  I decided to run low power until the Expert amplifier was inline. 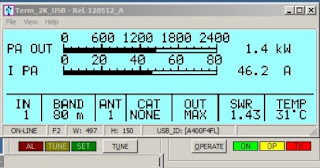 While 20 meters produced a few QSOs with Europe (and yes, Spain), within an hour the only thing heard were stateside stations, making it time for a move on down to 40 meters.

It wasn't until 03:00z that Europe made its way into the speakers.  Finding a run frequency added more QSOs to the log.


While some stations were handing out 600+ QSO numbers, the actual amount of contest activity experienced on the Left-coast was incredibly lacking.  At 04:25z WM6Y made an appearance in Fallbrook, to put the Expert amplifier into the antenna line.  Within 45 minutes WQ6X was running as a high power entry.  Oh what a difference 1300 watts makes. 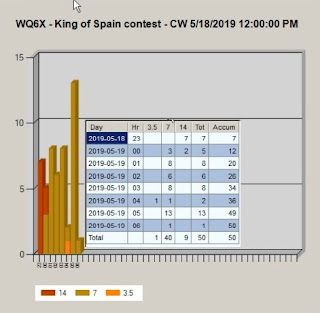 Amazingly, it seemed that the minute a switch was made to high power stations moved in on one run frequency after another.

Hoping for an Asian opening (similar to the previous weekend), the Shorty-40 was  turned to 300-degrees.

Unfortunately, all I heard was the Russian "M & "F" beacons; not a single JA station was heard.

I decided to take a "short nap" and come back for those hoped for Asian stations.  Evidently I needed the sleep - I didn't wake up until 11:55z; with only 5 minutes left in the K-o-S contest.


Did you play around in the King of Spain Cw contest?
Is WQ6X in YOUR Log?