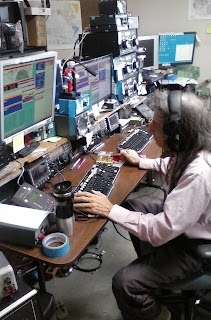 For me, the All Asian DX contest is a mixture of enjoyment and frustration coupled into one weekend; be it the CW weekend, or the SSB weekend.


Because All Asian is situated between the WPX C.w. contest and Field Day, I never know what I am going to do for the event, almost until it happens.


A couple of years ago I operated All Asian (solo) and Field Day (w/team W6SW) from a campsite on Mt. Abel.  Last year I joined up with the nerds at NX6T (literally, one was N6ERD) where we took 1st place for North America, before driving to Mt. Abel and joining team-W6SW.

This year, client requirements prevented me from putting together a full station on the mountain.  Like last year for 2016 I not only joined the team @ NX6T, I again allowed Amtrak to escort me to Oceanside, instead of making a 10+ hour drive.  I am writing this blog entry on the return train to Oakland at 5:00 in the morning.

This year's All Asian contest is proof that we are nearing the BOTTOM of solar cycle 24 - bummer dewd.  Then again, the sooner we get it over with, the better.

For the 2016 All Asian contest, the bad news this year is that 10 meters never happened, even though I gave CQ's on Saturday and Sunday. I saw a couple of South American stations on the bandmap, but that was it.  15 meters presented us with barely 100 QSOs.

Throughout, the contest, 15 meters was open to Asia with STRONG signals yet the actual number of those signals was a fraction of last year.  I attribute this to poor participation, not so much poor propagation.

This situation mirrors a complaint I've had for years - not enough Asian stations play in their own contests.  It seems like I heard more stateside stations calling CQ test than Asian stations.  On 15 & 20, the few stations there were usually very loud; again suggesting the problem was participation not propagation.
Am I missing something?

On Saturday, West Virginia held a state QSO party.  Except for an AA8 station calling (after my CQ AA), I heard no other WV stations.  I was prepared to put some morning time into their QSO party, but as it turns out it was not necessary.

Between N6KI and myself, plus N6CY (attempting remote access) and N6ERD + N6EEG we managed just under 27 hours of actual OP time out of the 48.  This year due to a shortage of operators I ran the night shift alone both evenings and ran much of the day shift on Saturday and Sunday.

Equipment-wise we ran the usual bevy of Elecraft K3 radios into ACOM 2000-a amplifiers.  Unfortunately, an ACOM reported tube failure side-lined one of the amplifiers; replaced by a manually tuned (but fully equivalent) Ameritron AL-82a. 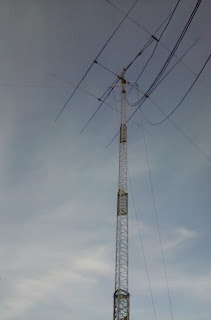 The antennas included a 3-el Stepp-IR with 160 & 80 meter inverted V's hanging from atop the mast, topped with a 2-element 40 meter yagi.

On a separate tower sits a numerous-element C-31 yagi.


Similar to the recent WPX contest, All Asian brought us all kinds of bogus QRM to deal with; not the least of which was the nightly South American SSB QRM on 7.018.18  mhz.  This time a couple of those stations purposely zero-beat me; when I moved they followed me exactly - wassup with THAT?!

There seemed to be a lot of tuner-uppers. Many Japanese stations are notorious for tuning up on my frequency before I get the contact.


This weekend was largely carriers without QSOs; such is the world of shared frequency space.  Fortunately, there were again no Russian beacons on 7.039 to contend with.  There also seemed to be FEWER JA stations on 40 than heard in the previous WPX contest.

Space weather wise while the A & K indexes seemed low, the upper band conditions seemed rather poor.  While much of the signal lack was due to poor participation, that didn't explain weak signals or hearing a UA9 station (working Europe) at 06:300z, when the band "officially died" in the San Diego area by 02:30z.

Compared to last year and years prior, I noticed that the average (mean) operator age had risen significantly.  During the last 5 hours of the contest, most under 62 Asian hams were either AT working or in the process of traveling to work.  Virtually every JA station worked during that period was 65 or older 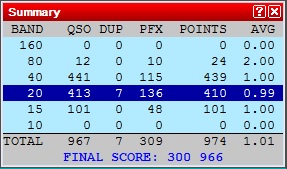 QSO wise, for 2016 our QSO total nowhere neared our 1400+ QSO 1st place from last year making this year's event a bit of a disappointment.

Nevertheless we DiD make 4th place worldwide and 2nd place for North America - not bad for a last minute effort.

How many Asian stations are in YOUR log?
Posted by WQ6X at 3:23 AM No comments: 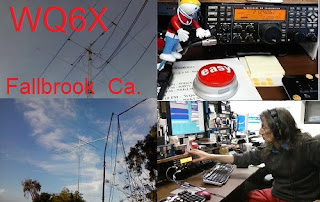 When I join up with the crew at NX6T for WPX, Dennis N6KI always chooses that we use my WQ6X callsign because as he put it "there are too many NX6 calls on during WPX".  Really?  I've never heard one.  I think the REAL reason my callsign is chosen is that it relieves him of the massive QSL card duties - WQ6X receives hundreds of QSL cards every WPX contest.

For this  year's WPX contests I booked client business in Huntington Beach during the weekdays leading up to the contest event.  For the Cw GiG I arrived "NashVille" at 22:00z allowing me to get settled into the operator's apartment next door to the radio shack.  Unfortunately, we had a shortage of available operators so unusual for me, I opened the contest. 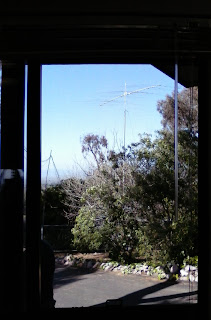 Equipment-wise we ran the usual bevy of Elecraft K3 radios into ACOM 2000-a amplifiers.  The antennas include a 3-el Stepp-IR with 160 & 80 meter inverted V's hanging from atop the mast, topped with a 2-element 40 meter yagi.  On a separate tower sits a numerous-element C-31 yagi.

In general, I rarely start a contest on time.  Because the original plan was to operate NX6T from a new remote location, N6KI did a spectacular job of preparing the NX6T site for my arrival.  Except for failing to test some of the Wintest CW macros beforehand, I was ready to go at 23:53z when I received a call from TF3DC (on 21.036 mhz)  in response to my T-E-S-T-ing calls.
We had a nice ragchew and he became the first QSO in WQ6X's WPX log.

Before the evening was long in play, N6KI suddenly showed up at NashVille declaring that the remote operation for NX6T was a bust, taking over the operator's chair after dinner (05:35z).

From that point on it was like old times - Dennis rousting me @ 2am for the graveyard shift - the real reason I'm needed in NashVille. 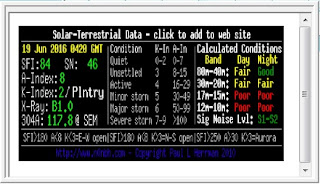 Space weather wise, propagation conditions were quite dismal.  Luckily, working domestic callsigns is a large part of the WPX contest.

Unlike weeks before, 2016 WPX Cw brought us all kinds of bogus QRM to deal with; not the least of which was the nightly South American SSB QRM on 7.018.18  mhz. 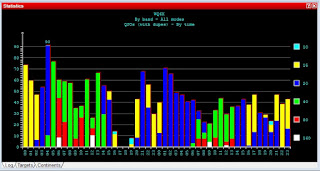 Unfortunately, on 80 meters I experienced QRM from data bursts while I was calling CQ on 3.535.35 @ 12:38z and again at 12:56z.  Then, as mysteriously as it showed up, it was gone.  If I had thought about it in time, I could have enabled the K3's 2nd receiver in data mode and attempted to copy the RTTY (if it was in fact 170 hz or 850hz); of course a GooD QRMer would use some other RTTY mode so as to remain virtually undetectable. 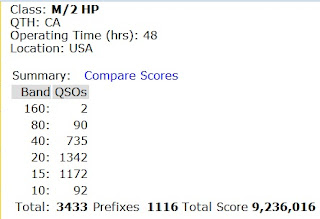 Lacking operators made all the difference here.  Compared to last year (10 operators), our 3 guys managed to make nearly 2/3's of last year's QSOs and nearly 40% of the score; not bad considering the age of the three operators.

(The San Diego contest club has yet to recruit some young bloods to the CW crew.) 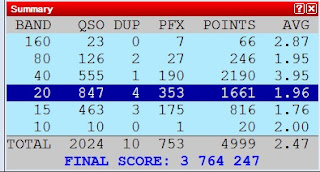 
Did you work the WPX contest?
How many weird prefixes did YOU work?