FOR WQ6X NA Sprint FIZZLES from the Beginning

This was the SPRINT weekend that never quite made it. As soon as I noticed the space weather K-index at 4, I should have just pulled the covers over my head and enjoyed a nice pre-dinner NAP. Arriving late Saturday afternoon, I barely had time to make up the needed N1MM+ .WAV files;
at least the software had been recently updated and configured. 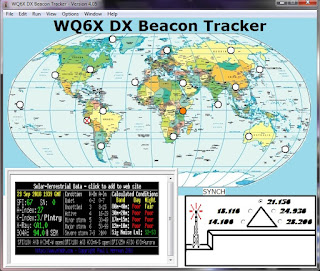 Typical for an NA contest, the strategy
is to begin on the highest band providing an opening (in this case 20 meters), working downward in frequency as
the evening progresses.


The 4 hours encompassing the SPRINT were spent frantically diddling the Yaesu's e-DSP knobs,
the QF-1A filters and even a switch in antenna configuration, with frustrating results. All 4 QSOs
made occurred on 40 meters using the onsite CHA-250 vertical. Configuring the 8JK Sloper as a receive antenna reduced the receive noise, allowing R-3 level copy of signals, but w/the side-effect
of reducing overall signal strength; which is where the PEAK setting of the QF-1A filter comes through, shaping the audio for improved aural consumption.

One of the goals of this weekend was to [once again] revamp the audio lines to the FT-1000mp.
After the contest, I unwound by tinkering with a recently acquired MFJ-1272 TNC interface for $8.
By use of some clever Y-audio connections and splicing audio connectors onto the TNC cable
(after chopping off [literally] the TNC DiN connector).

External equipment testing (on 3587.87) after the SPRINT GiG not only confirmed the validity of the transmit cabling, it gave the FT-1000mp a FULL DUTY Workout for over 20 continuous minutes of send looping "Tasting 1,2,3" messages. Another transmit test on Sunday confirmed the 100-watt FULL DUTY capabilities; just in time for the CQ W.W. RTTY Contest.

Originally, I bought this Yaesu FT-1000mp from N6VR, largely in part because of his award-winning,
proven contest use of the radio, running it SO2-R with a nearly identical FT-1000mp; which KB7V eventually purchased.  Ray (typical of many contesters) sold off a pair of 1000mp's, replacing
them with a pair of Elecraft K3's.  Ergonomically, I prefer the Yaesu over the Elecraft any day.

Shortly after setting the radio up @ W7AYT's QTH, I discovered the transceiver could run RTTY
@ 100 watts (FULL DUTY) with only a barely perceptible cabinet warmth felt over the PA section.
The [barely audible] cooling fan on the left side of the transceiver evidently does an EXCELLENT
job of keeping the insides of the equipment incredibly cool.

For this contest weekend the older (but recently added) QF-1 filter and it's counterpart the MFJ
752-B were contributing very little towards QRM/QRN reduction. These units have been recalled
to the "WQ6X equipment evaluation lab" for further consideration and re-evaluation.
For now, that leaves a lone QF-1A (for Main-RX audio) and a JPS NIR-12 for Sub-RX audio.

At least both receivers will have DNF (Digital Notch Filtering) along with DNR (Digital Noise Reduction) and audio bandwidth shaping. During my next visit to W7AYT, I will bring in
a 2nd QF-1A for insertion into the Sub-RX audio line (BE-4 the NIR-12 DSP).
This will create a variable near equivalent (altho analog) to the eDSP contour
control in the 1000mp's Main-RX.

I was so preoccupied with the failed-SPRINT and RTTY testing I found no time for the Maine
QSO party (MEQP). Reading the after contest soapbox comments, it would seem that the SF
bay area was hardly the only area in North America experiencing the problem with weak signals
and near S-9 noise levels.

Then again, some top notch operators did quite well, in spite of the poor condx. KK6NON did an OUTSTANDING SO2-R run as NX6T. While I HEARD NX6T on both 40 and 80, the propagation
was all one way at W7AYT; mostly receive only, except for Oregon and a pipeline to IN & OH.


While this contest weekend was hardly what I expected, at least the FT-1000mp setup @W7AYT
was given a good workout.  If I could say the same thing about the WQ6X 8JK Sloper, then all will
be good.

Did YOU work the NA SSB SPRINT contest?
Is NX6T in YOUR log?

WQ6X SPRINTS thru another 4-Contest Weekend

September has been an "unusual" month for me in that I have been motivated to operate
2 out of the 3 NA Sprint contests; first the Cw Sprint and then the RTTY GiG. Normally, this
would not be considered much of a feat, except that in both cases WQ6X was running remote
from NX6T in Fallbrook. In recent weeks the internet dropouts seem to have gotten WORSE
(altho a solution is En Route) making SPRINT operation a "dicey" affair at best.

For RTTY contests, internet dropouts are less of a problem than for Cw GiGs.

In Cw contests, the decoding is done in my head - after the audio has made it's way (or not) through the internet.

With RTTY, the decoding is done on the NX6T end; other than a complete failure of the VNC Viewer connection,
a little latency is not impactively noticed - the decoded text is patiently waiting on the other end for my perusal.

After a birthday lunch at Alameda Point, the goal for this last contest weekend was to dabble
around in the half-dozen dx contests and state QSO parties, with the 4 hours of the NA RTTY
Sprint to "break things up a bit" - so to speak. Tuning around the bands throughout each
contest GiG time-frame, I managed to participate in 4 of those GiGs.

Any GiG I did not participate in this weekend had EVERYTHING to do with LACK of
Participants for those events. How can we participate in YOUR QSO Party if YOU won't play?!

In order for a state QSO Party to be effective, there need to be dozens (if not hundreds) of
stations operating from that state (activating ALL counties), with signals loud enough to be
heard around the continent, on as many band-modes as allowed by the QSO Party rules.
From my perspective, only the California QSO Party (CQP) accomplishes that goal.

According to the WA7BNM Contest Calendar, on the HF contest agenda for this last
weekend were the following events (in time chronology order):

All Asian SSB - not All it was cracked up to be 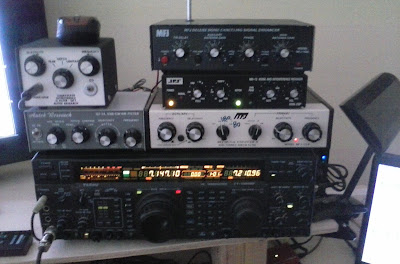 In recent years the All Asian SSB contest has increasingly been a disappointment, largely due
to the declining sunspot cycle in the last few years.. In fact, there are more Chinese, Philippine
and West Malaysian stations than in years past, except that due to the current low SFI, "nobody"
(at least not in N. America) can hear most of them.

The operating experience @ NX6T was frustrating because while we had plenty of available operators this time around, frequently there was nothing left to do but listen, listen, and listen
some more. 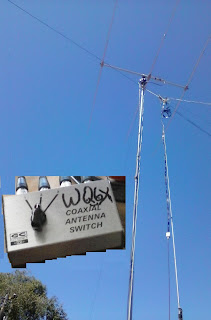 Running portable from W7AYT's QTH (in Concord, Ca.) offered up the opportunity to tweak the WQ6X Lazy 8JK sloper antenna I have been experimenting with during
the summer.

Unfortunately, while the new terminator resistors seem to have lowered the radiation angle somewhat and improved propagation to Indonesia (YB, YC, YD & YG), Oceania stations don't count when running All Asian from W6-Land.

Using the CH-250 vertical onsite @ W7AYT made most signals louder but along with an increase in atmospheric noise; i.e. the S/N ratio did NoT improve.

Using the WQ6X antenna switch to parallel the CHA-250 and 8Jk Sloper did not seem to produce the same results
as 2 weeks ago during the NAQP SSB contest - Go Figure.

As it turns out, the only successful non-Asian activity was the 5 QSOs put in the AQP (Alabama QSO Party) log and the dozen QSOs made as NX6T during Sunday's TNQP (Tennessee QSO Party) GiG. In the AOP event, unfortunately, all Alabama stations worked were in Madison county, except one station in Walker county. The propagation from the SF bay area to Alabama was so poor (how
poor was it?) I could've WALKED to Walker county faster. 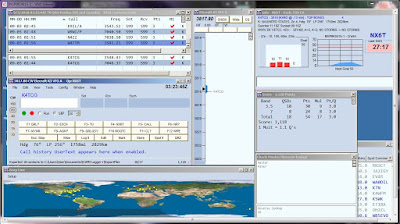 Luckily, southeast propagation picked up late Sunday afternoon allowing me to work the TNQP
as NX6T after the All Asian GiG was over with (5pm local time). Because 20 meters had already opened to the Pacific (West) and no longer W4-land (the East), I began TNQP action on 40 meters.

In the last hour, there was an explosion of W4 signals on 80 meters giving me a shot at a top score
(I believe running as NX6T took a TNQP 2nd-place for W6-land).

For this contest weekend, 10 & 15 meters never materialized at either NX6T -OR- W7AYT, except
for JE1CKA on 15 meters (with an S-2 signal) during the All Asian contest. 20 meters gave us weak hope, while 40 meters carried the bulk of our operation. At 12:00z WQ6X put the QF-1 & QF-1A
filters in-line and, using a magnifying glass managed to put a handful of UA0 & JA stations in the
log; the one JA I "missed" was not a mult so I was not allowed to work him unless I invested 10 minutes and became a "run" station.

One of the more fun QSOs was with a UA0 station calling CQ wanting to ragchew.  Altho his English was considerably broken, we managed a 2 minute QSO out of which I received a 5-7 report from Magadan (where the "M" beacon is located) and his age of 33.  With that information I could legitimately enter him in the NX6T log.


The Autek filters made an incredible difference during this contest weekend.

Being able to switch between the
CHA-250 vertical and the 8JK sloper
also helped pull signals through.


For several weeks, it seemed that the "intentional QRM" (at least on 40 meters) had largely subsided.
Then comes THIS All Asian weekend.  When I came on shift at 11:00z (4am) the Woodpecker Radar (on 6.995) was furiously tormenting 40-meter communications; even at 7.220 it was an annoyance. 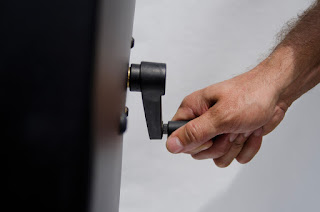 Once I figured out how to filter most
of that out and call "CQ All Asia" on 7170.70 I was met with our friendly neighborhood "Data Cranker".

An hour later while calling "CQ All Asia" on 3729.29, the cranker was back.
Now I KNOW this was no accident.

I was ALSO plagued by the National Tuneup Frequency (NTF) throughout
the weekend.


Luckily, the K3's auto-notch is rather effective at notching MOST of carriers out of the passband.
The remaining 20db of carrier audio was then auto-notched by the NIR-12 DSP unit processing audio for the right ear.  Auto-notch filters are one of God's top-10 most AWEsome inventions, but ONLY for SSB; on CW and RTTY auto-notch is relatively worthless.

I am so USED to experiencing intentional QRM on 40 meters that I feel blessed if I am left alone all weekend.

If I am going to have to put up with "intruders" in the Amateur bands then they better give us something in return.

With the Russian military beacons on 7.039, what they give back with their presence is a "free" propagation report between California and various locations in Eastern Russia.  On Saturday
morning (10:18z) the only beacons heard were the SLOW sending "M" beacon and the FASTER sending "K" beacon (with a longer pause between repeats).

The Indonesian SSB stations who love to ragchew below 7.020 give us nothing back in exchange
for all their noise and cacophony.  One morning I even heard several Buddhists chanting on 7.018; whether it was multiple stations or one station with 6 monks behind the microphone, I could not ascertain.

What about YOU?  Did YOU work the All Asian contest?
How many Asian prefixes and countries made it to YOUR Log?
Posted by WQ6X at 1:03 AM No comments: