Despite some incredible operational tactics,  my joint operation with NX6T in Fallbrook this last weekend only netted us a 16th place (out of 17 entries) world wide in the Multi-2 transmitter category, altho we may well have taken 1st place for the W6 call area. 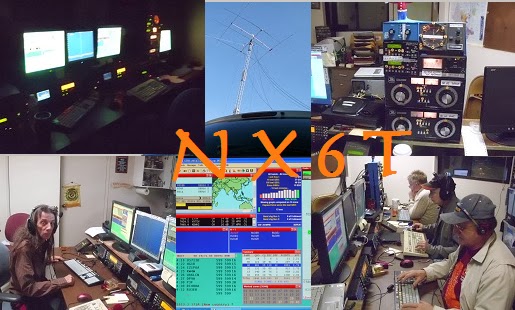 Similar to the JIDX GiG, we ran a pair of K3's front-ending a pair of ACOM 2000 auto-tune amplifiers putting nearly 1400 watts into a pair of Stepp-IR & 2-El 40-m yagi combinations.  Similar to JIDX, our operation got off to a shaky beginning, bouncing back a couple of hours into the event.  While N6KI &  WQ6X were primary operators @ NX6T, throughout the weekend other operators ( N0DY, NN6X, N6EEG & K4RB) took one of the helms.  Because I am willing to pull the "night shifts", I am usually given the 3am - 9am shift; especially in this contest.

While the solar flux dropped from 170+ to 140, overall the bands were amazingly quiet.  10 meters was incredibly open, as was 15 meters.  Despite those great condx, as highlighted below, 40-meters delivered over 1/3 of our QSOs for this contest.  While we only managed 21 QSOs on 160, the California--> Asia path was certainly there; had more Asian stations made a 160 appearance they would have found great west coast propagation - too bad they didn't. 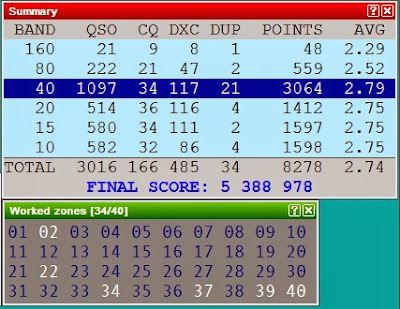 Based on spotter reports and consistently busting pile-ups on the 1st/2nd call it would seem that NX6T had a booming presence in Europe & Asia and at least a commanding presence in Central/South America.

My operations consisted of significant time spent in S & P mode, switching to running a frequency when a "hole" in the spectrum suddenly appeared.  Late Saturday evening while running solo I remembered that there was an audio switch box for combining both K3's into faux-SO2R arrangement.  The 15 minutes I spent reconfiguring the cables allowed me to run a frequency on 80 & 160 while S&P'ing on 40 and eventually 20 meters after sunrise washed out 7-mhz & below; at which time 10/15-meters became the RUN frequency. 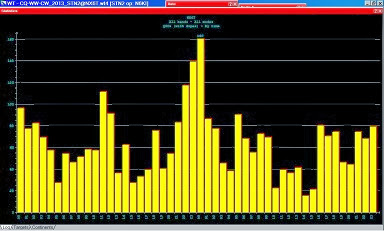 Although not super eventful, overall, this years W.W. Cw contest was a lot of fun.  Our Multi-2 arrangement gave our 6 operators virtually all the time in the chair they wanted.  Thanks to the operator's apartment next door, I was able to catch 4-hour naps and make an appearance on virtually every operating shift. 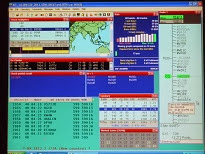 Did you play in the CQ World Wide contest this year?
If so, did you make DXCC & WAZ? 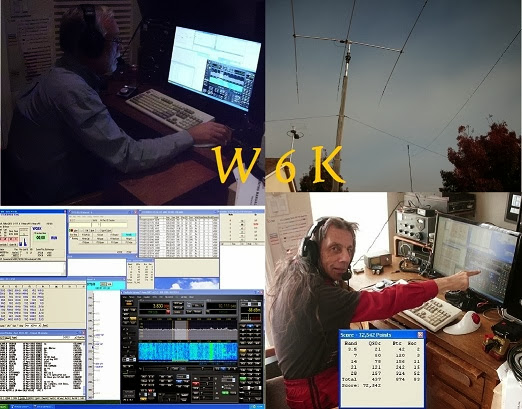 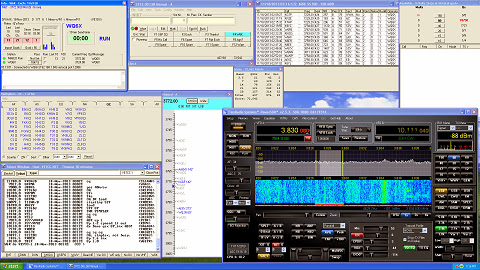 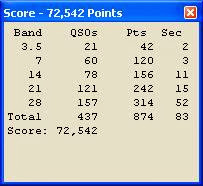 This last weekend's JIDX was an interesting challenge in many ways.  Registering the W6H callsign (In honor of the late Hiro - JA1FRQ) I again teamed with the NX6T group in Fallbrook Ca.  (also known as "Nashville" in honor of Nash W6HCD who passed this year).  At 1,000' elevation, physically, Nashville is ideally suited for contesting, with the exception of a nearby noise source in the direction that we point the antennas for the best path to Japan. 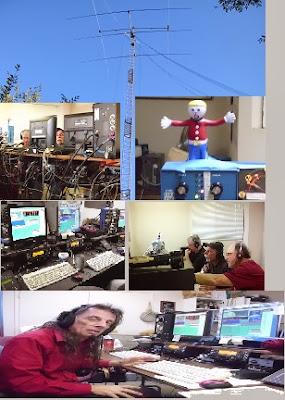 This contest season team leader Dennis (N6KI) has been experimenting with a multi-transmitter setup which qualifies under multi-single category.   Three radios (2 K3's and 1 TS-590) were put together allowing a "run" station (a K3), a mult station (another K3) and a search/pounce station (the TS-590) interlocked with the run station so only one or the other can transmit.  With this configuration we managed 668 Q's (versus 861 in 2012), but evidently enough to have locked up 1st-place world wide for the MOP category - at least according to the 3830 Scores website.  Ironically there were single-OP stations (both Russian) with way more QSOs than we had.

In this run of the JIDX there were indeed a dearth of Japanese stations participating; one only has to look at the highest QSO number on any individual band to figure that one.  This is consistent with my beef that Asian stations don't participate in their own contests.   While we managed to work prefectures 1 - 47, 48, 49 & 50 were not active in their own contest; altho JD1 WAS active in the WAE RTTY contest (also running during the weekend) - wassup with that ??!!??

An updated version of the WQ6X Prefecture Tracker software gives us the breakdown of the 47 prefectures worked by W6H throughout the contest weekend. 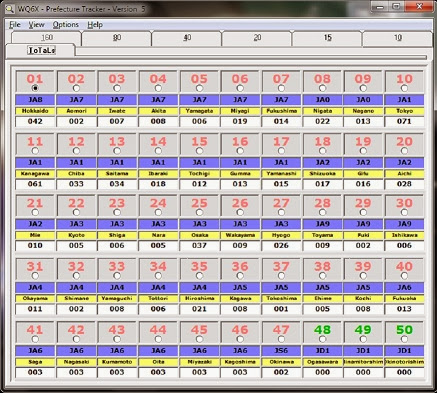 80 meter participation on the part of the Japanese was very poor - we only worked 20 stations; most of them on Sunday morning.  This year we had no 160 meter antenna so we missed out on whoever was there.  40 meters was THE band this year with about 45% of the Q's made there; mostly by the run station, with a few snuck in by the S/P station.

While the solar flux remained a medium all weekend with no real storms (until after the contest) 10 meters was somewhat of a disappointment.  20 meters to Japan has been quite a disappointment in recent years from this location, so it was up to 40 & 15 meters to carry the contest forward; with 10, 20 & 80 rounding out the activity. 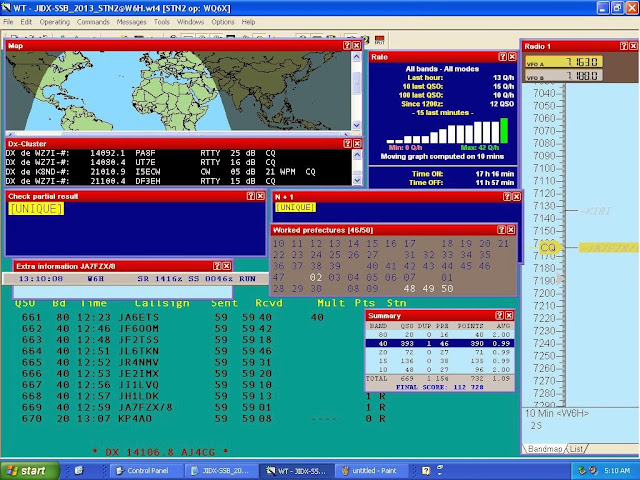 We had a team of 9 operators with varying degrees of experience, which made for an interesting operation. My job was to operate a little bit throughout the weekend, on every shift within the 30 hour period.

Fresh off the high of receiving the 1st-place MOP plaque from last year's JIDX, we plowed into this contest with plenty of focus and enthusiasm - helpful when we ran into equipment glitches throughout the weekend.  While running a pair of ACOM 2000 amplifiers has its advantages, free-floating RF in the shack is not one of them.

While we made a lot of mistakes and encountered many technical difficulties it would seem that W6H will again earn a MOP 1st place plaque for 2013. 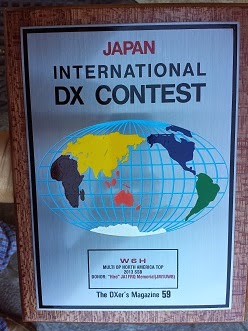 Did you play in the JIDX?  How did your operation turn out?
Posted by WQ6X at 12:57 AM No comments:

This last weekend again found me in Brentwood (EB section) teamed up with N6GEO as W6K for the 80th running of the Cw November Sweepstakes contest.  We had a lot of ideas for how we would operate this contest as a multi operator setup.  In the end they all didn't make it.


We settled on running a FLEX SDR-1000 (Software Defined Radio) into a pair of cascaded amplifiers giving us 145 watts out; just enough to top-out at the low power limit of 150w.  We front-ended the receiver section with a CW skimmer, which is legal as multi-OP is also an assisted category.  The skimmer certainly helped cut down on code copying errors and made search & pouncing (S&P) a lot of interesting fun.  For antennas we used an 8mh TH-3 jr. yagi  for the high bands and a ground mounted 6-BTV vertical for 80 & 40.

Our goal was to beat last year's record of 469 Q's and get a clean sweep to make up for missing it by 2 sections last year and 2 in this year's CQP.  As with CQP there were a dearth of Vermont stations (2 to be exact) so we almost missed the sweep.  Finally at 20:44z N1UR popped up on the "needed station" screen.  A double-click of the mouse and a switch on the amplifiers snagged the illusive lil' bugger.  We ended up with 531 QSOs in all 83 sections for an ending score of 88,146 points. 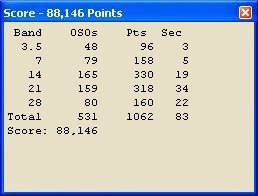 There was a propagation rumor that a number of solar disturbances were headed our way.  While I heard that there were signal dropouts at NX6T in San Diego, in the East Bay we experienced no real signal problems other than the predictable slow-fade on 15/10 meters.  I was disappointed in the small number of stations who actually made it down to 80 meters.  Wakeup people!  80-meters was HOPPING - for those who did show up.  Even 40-meters was lacking in signals; not because of poor propagation, but because people didn't spend enough OP time there as we did.

Now that we proved we can get a sweep and beyond, preparations are under way for W6K to operate Sweepstakes phone with this same arrangement (except the Skimmer, which does us no good on SSB).

From the reported QSO numbers and submissions to the 3830 Scores website we know there were over 1500 active stations in this year's event.  This year the number of reported section sweeps seems to have significantly increased over last years action when the Ontario (ONT) section was split into 4 multipliers (ONE, ONN, ONS & GTA).