Work commitments kept me from driving to Fallbrook to join NX6T's 1st-place multi-2 operation for 2014's JIDX 2014 GiG, so, at the last minute I again reserved the W6J callsign and set up a portable GiG from Concord, Ca. - in the SF east bay section - running an ICOM 7000 into an HF2-V vertical, tuned for all bands.

Thus far, according to the 3830 Scores website, I am the only single-band-40 low power entry - we shall see.  Then again, last year my submission to 3830 website was the only one for 40-Lp, yet I actually placed 3rd - a reminder that entries on the 3830 scores website are only rumors.

Thanks to this weekend's mediocre SFI of 136 and K-Index of 5, the atmospheric noise was HORRENDOUS - often S-9.  Two days after the contest, the SFI is back up to 160 and a K-Index of 1 - Go Figure.

Because noise is vertically-polarized, running a vertical antenna didn't help matters much but it was all I had available for this location; the numerous trees in the area were not on the QTH's property and were inaccessible for hanging my 8JK dual-Sloper arrangement.

Even though I thought the use of the 1x1 callsign would be an obvious JIDX tribute, I was amazed by how many stations had trouble with the W6J callsign this year (way more than last year).  Then, because the S/N ratio was so poor, stations would immediately move on and start calling CQ; often not working anyone for several minutes, while I continued to call them.  The bottom-line is it PAYs to be patient and work the stations that are calling you; no matter how difficult it may seem.

I originally was to run the N1MM logger on an old Windoze XP system, but RFI coming thru the keyboard (even with magnetic donuts) made XP run weird.  Instead, I switched to running WINTEST on an RFI free Windoze 7 computer.  I lost some serious operating opportunities due to logging software glitches.

After my work commitments on Saturday I arrived in time for a 15-m & 10-m opening.  I worked all I could find on 10-meters and then switched to 15-m to discover that the antenna had a make/break connection which only manifest on 15-meters.  After 40-minutes of antenna futzing I resolved the antenna problem just in time for 15-meters to drop out at 02:00z (In recent weeks, 15-m has been staying open until 04:30z).  Results?  A QSO count of 0 for 15-meters.  After the 15-meter mishap, because of the weak signals and the noise, Saturday evening (02:00z to nearly 07:00z) yielded no stations on 20 meters; another reason to submit the SOSB-40L score.

Repeatedly, my biggest complaint about JIDX  again this year is the POOR turnout on the part of the Japanese stations themselves.  (I have the same complaint with the All Asian Contest.)  To makeup for that dearth, I spent a lot of time calling CQ JA, when in fact there should have been 2x to 3x the number of search and pounce (S&P) opportunities available to me.  While I don't mind running a frequency, technically, for JIDX I should not have to.

I am also surprised by the number of JA stations that don't know what prefecture (by prefecture # - 1 to 50) they are operating out of.  Asking for their JCC # often solicits the needed information; if you know how to convert  that number into a prefecture. 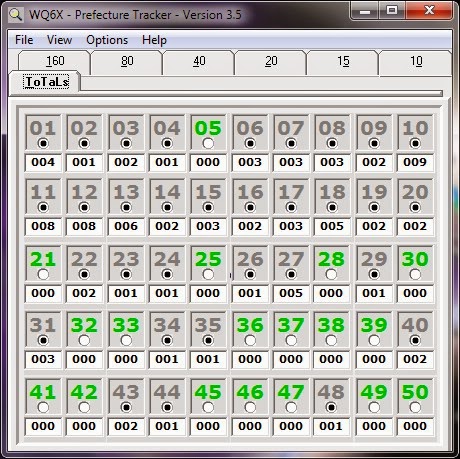 To keep track of prefectures by band, some years ago I devised an APP known as the WQ6X Prefecture Checker.  If there is enough interest in this product I may well release a freeware version of the software.

Did you play in this year's JIDX Cw contest?
How did it go?
Did you experience significant atmospheric-QRN? 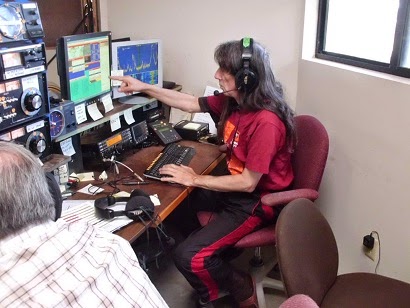 For the contest weekend the SFI dropped to 142 while the K-Index eventually creeped to "3" by Sunday morning producing a "popping" static noise on 10 meters. Ironically NX6T's 10-meter operations resulted in our highest band QSO total.  Reports I have read seem to agree that on the high bands propagation was quite good; especially to Europe.

At NX6T we ran the usual pair of K3's and Acom 2000 amplifiers into a pair of Stepp-IR & 40-M yagis @ 40' & 70' respectively.  An altitude of 900'+ to begin with made things even better.  We encountered the usual noise source(s) (discovered when rotating the antennas towards NNE).  Luckily, for 160 & 75 meters we could null some of the noise with a rotatable loop antenna.
There were a not insignificant number of 1st-time participants this weekend; many of them offering up a unique (aka weird) prefix (i.e. a new multiplier); proof once again that patient mentoring of novice operators can reap everyone worthwhile dividends.

True to each successive WPX event, the number of "weird prefixes" continues to increase; esp. from the "European corridor" - makes me wonder what the 2014 WPX Cw event will bring us during Memorial day weekend.  I've concluded that one of the factors contributing to our large number of multipliers is due largely in part to our multiplier-mascot.  I caught a picture of our mascot near the end of the contest. 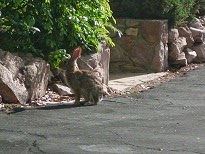 This WPX contest found 160 & 75 meters lacking in contest activity, altho 40 meters produced surprising activity; esp. from Asia & Oceania.  Now, if we could experience this kind of participation in the JIDX and all Asian Dx contests, I would be VERY happy.

Overall, this is the best WPX Ssb event I've ever participated in; as well as our best effort as team NX6T.  While we didn't produce a top-10 high score, overall, we experienced very few equipment/operator/operational problems; proof that we are learning from our mistakes in contest operations.

Did you work NX6T this last weekend?
We gave you 6 bands of opportunities.
Posted by WQ6X at 6:55 PM No comments: