It is still hard for me to fathom that at this time last year I was lounging on the patio at Radio Reef (KP2M) on St. Croix with George (N6GEO) and his XYL after what turned out to be our triumphant 1st-place entry (worldwide) in the 2014 RTTY RU contest. 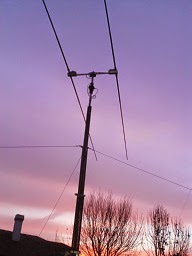 Ironically, this year we did not work, nor did we hear any stations on from the Virgin Islands; only WP3, KP4 & 8P2 from the Caribbean.

The 2-element Stepp-IR antenna has performed flawless from the N6GEO QTH for several months now.

While it LooKs tall, the military mast is barely 8-mh.  Because the QTH is located in a CC&R controlled neighborhood, we have to put the antennas up and take them down each contest weekend.  Every time we do this, some improvement is made to the system.  Who nose, one day we might even get it right.


This year's operation included dozens of ideas that we learned from our time in the Virgin Islands; altho the radio has grown up from the little FLEX-1500.

For 2015 we operated from N6GEO as N6GEO running George's FLEX-3000 into a KPA-500 amp dialed down to around 145 watts; except when we ran a frequency, we ran the amp at about 110 watts.  Running the KPA-500 full-duty cycle kept the fans busy.  Otherwise, the amp performed flawlessly.


Unfortunately, on Saturday a number of last-minute surprises (such as a middle of the night water heater failure) kept George out of the shack during much of the daytime.
To counter-balance that George put in a superb effort on 40 & 80 meters Saturday evening.  My activity on those bands was minimal - a handful of stations on 40 meters Saturday evening and 9 QSOs on 80 after 14:00z Sunday morning.  Other than that there was no greyline to be had. 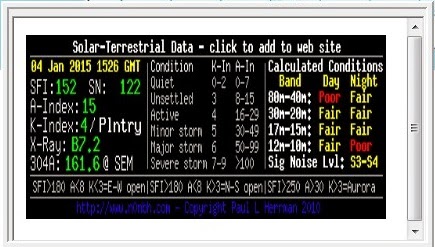 While the space weather forecasts were dismal, we encountered very little geo-storm noise except on 80 meters Saturday nite.  Amazingly we encountered NO local RFI noise on 40-meters as we have during recent contest weekends.  This weekend the propagation effects I noticed were various forms of atmospheric fading: long fades on 10-meters Saturday afternoon and short, choppy fades on Sunday.

Because the VE7CC spotter was down for much of the weekend the only way I could get space weather information was from the WQ6X Beacon tracker (as you can see above).
Space weather forecasts after the contest were even WORSE (A-Index=20, K-Index=5).


During my Saturday afternoon operating stint George lashed together an 80-meter sloping inverted "V" which we hoped would pick up where the 6-BTV on 80-meters leaves off - WRONG!
Evidently the apex of the "V" was so close to the house it acted as a noise-pickup antenna, even noisier than the vertical.  Oh well - maybe next time.

On Sunday afternoon I noticed that the NCDXF beacon on 14.100 was obliterated by scores of RTTY stations ignorant of the fact that the frequency is preferably allocated for beacon operation.
The PROPER thing to do is to grant open space a MINIMUM of +/- 3Kc (better +/- 5kc) for proper beacon operation.
Unfortunately in RTTY contests this RARELY happens,
Did you walk all over the beacons?
Whut?  You didn't even know they exist?  Shame on you! 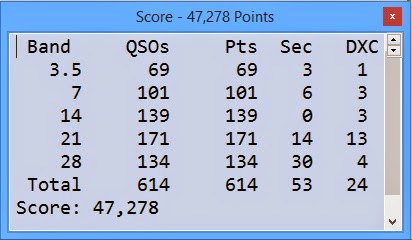 When the RU was all over we had amassed 614 QSOs w/53 multipliers in 24 countries - not bad considering what we had to work with.
Running frequencies (10-meters on Saturday & 20-meters on Sunday) gave people an opportunity to add N6GEO to their log on several bands.