WQ6X does the NAQP RTTY Contest

This weekend found me playing in the NAQP RTTY Contest.
This was another ad-hoc operation running the ICOM 7000 into a pair of hamsticks 5mh.
I was amazed to be able to work all areas of the U.S. & Canada, as well as KH6 & JA from that pair of rods.  90 QSOs may not seem like a lot, but using only those rods, it is fantastic.
While I've been getting more involved in RTTY contests in the last 6 mos., the NAQP RTTY GiG is a first for me.  Originally, because there were a couple of state QSO parties happening as well, I considered playing both.
Instead I decided to just play RTTY alone - it was more than enough to keep track of.
Although this was a RTTY contest, I encountered many of the same problems encountered in SSB & Cw contests:
I am finding RTTY contests to be as enjoyable as Cw GiGs.
I look forward to further events.  Having YOUR callsign in my log will be good for all of us.
When are you going to come and play RTTY with me?

This last weekend found me operating the ARRL Dx Cw contest from the SF bay area instead of Fallbrook.  I quickly setup the HF2-v vertical in its usual umbrella stand with a dozen radials, guyed with four thin ropes.  Because the Yaesu FT-900 sports an auto-tuner, I chose to use it instead of the ICOM 7000 (which would require me to setup the MFJ tuner and figure out all the settings).
The solar flux of 100 notwithstanding, 15 meters was quite a disappointment this contest; 10 meters wasn't much better - 40, 20 & 80 (in that order) were the best bands.

This year, I was frustrated by a number of Dx operator anomolies:
Nevertheless, I managed 211 QSOs in 39 countries (all continents).

Notably absent were Asian countries (other than China & Japan) and down under (VK & ZL).  The lack of Oceania was not due to poor antenna performance.  When the signals were there they were often S9-plus.  Signal presence from South America was quite good for this contest.  Even the African signals (what few there I could hear) were quite strong.  Northern Europe made quite a presence on Sunday altho southern European signals were noticeably lacking during this event.
I did mostly search and pounce (S&P) altho when I did call CQ, I was rewarded with a reply from CR3A (Madeira).
While this was not necessarily a memorable contest event I did find it enjoyable.
If the currently rising solar flux (114 today) holds for the DX phone contest, we should have some interesting fun. 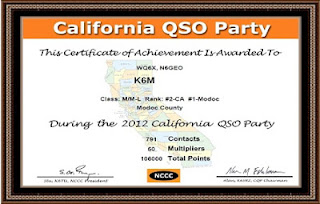 Yesterday, the CQP website published the final results of the 2012 CQP event.
Our 2nd K6M event from Modoc County garnered George (N6GEO) and I a 1st place finish from Modoc and a 2nd place finish overall (for low power) in California - not bad for our error-riddled ad-hoc setup in the middle of nowhere.
Last night I updated the WQ6X 2012 CQP page for last October's operation.  While there were moments when we wanted to say "screw it!", we forged ahead and ended up with a mighty fine showing; even though we can (and will) do better.  With proper planning (and no antenna failures) there is no reason why we can't surpass the 1,000 Qso mark.

This last weekend found me teamed up with N6GEO at his QTH in Brentwood (Northern California).  Despite a minimal antenna system (a 6BTV Vertical and a TH-3 jr - 8Mh) and running only 100 watts, we did amazingly well operating as a Multi-Two; we make a good Multi-2 team; as demonstrated by our last 3 CQP activities.
George put his newly acquired Flex 1000 to incredible use picking off QSOs with ease, thanks to the 1000's SDR design.  On my end, despite intermittent computer control with the ICOM 7000, I made things happen - working nearly half of the contacts using more primitive methods.  Several times in the contest I was able to hold and run a frequency for nearly an hour.  I have no problem doing that on c.w., but having never done that before in a RTTY contest was an exciting challenge; especially with an occasional filter "drift" in the MMTTY software.

We ended up with 699 Contacts with 285 Prefixes for an estimated score of 367,080 points, which will get whittled down for every logging mistake we made.
Overall, not bad for an ad-hoc, two radio setup.

To George and I, what was significant about our success in the RTTY contest is that we FINALLY got to test-drive the antenna triplexer unit George built last year to use on the beam for CQP in Modoc (which as you may remember never made it: See my 2012 CQP page).

A Triplexer allows up to 3 radios to concurrently share a single tri-band antenna.  Because we use bandpass filters on each band, we had very little interaction between the two radios, except when the SDR-1000 went to 80-meters - the BUZZ was fierce!


It turns out that we took 1st place for the W6 call area, even though the LCR (Log Checking Robot) DINGED us for almost 89k points due to logging errors.  OUCH! 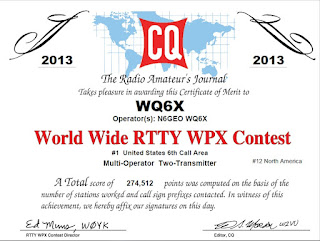 This Super Bowl weekend also sported a number of different radiosport competitions including the North American SPRINT on C.w. and the Mexican RTTY contest - both of which I participated in from the 2nd floor of the Phoenix Lodge running the ICOM 7000 into a pair of phased Ham sticks for 80/40 which also worked for 20, 15 & 10.

There were a number of QSO parties from Minnesota, Delaware, Vermont & British Columbia altho I was only able to work one BC station.  Even tho I could work other Canadians in the RTTY contest and numerous east coast stations in the SPRINT, I heard no signals from MN, DE or VT - Go Figure.
Did you play in any of these events?  If so, how did they turn out?

This coming weekend I will be teaming up in a Multi-2 operation for WPX RTTY using the WQ6X callsign from N6GEO's QTH in Brentwood California.  Come play RTTY with us.

This evening I prettied up the WQ6X page on QRZ.Com.
It contains links to this BLOG as well as my WQ6X.Info Website.
Check them out.