While enthusiasm is usually a good thing, sometimes the real world shows up and challenges that enthusiasm.

In amateur radio Radiosport, sometimes it seems as if solar disturbances and weird equipment anomalies go hand in hand.

Then again it could be that I am just a bit overly paranoid.

For the 2016 CQ WW RTTY contest I made arrangements to operate solo from W7AYT's QTH in Concord California (Zone 3 in the ARRL East Bay section), bringing in a Yaesu FT-1000mp and an 8mh Cobra sloper to augment the Comet CH-250 vertical already installed at the location.
The FT-1000mp sports a robust antenna switching facility allowing me to select the best of the two antennas for a given signal; altho I could not get the Cobra sloper to tune on 40 meters.

My plan was to attempt SO2V using the West Mountain Radio Plug-N-Play device I modified to work with the FT-1000mp.  Unfortunately the modified unit did not work as planned starting a series of frustrations.

Throughout Friday stations could copy me nicely but My end of the equation was having difficulty properly decoding stations calling me; evidently from the decoder circuitry being overloaded and therefore unable to decipher.


Because there is a 33" monitor next to the operating position I configured the laptop to run split screen with the RTTY engine, Greyline display and contest stats on the auxiliary laptop screen, relegating the main logging functions to the larger TV monitor.

40 meters on Friday evening was quite a disappointment with very poor signals from Asia. 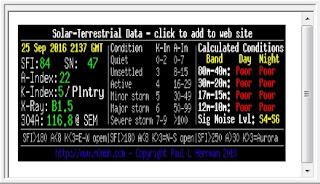 While the A/K indexes were numerically quite low, space WX reports labelled the band conditions as poor.  The truth was somewhere in the middle.  Band-wise, 15 meters was a huge disappointment, while 10 meters netted only K3EST (20 miles from me) via groundwave.

At 5am Saturday (12 hours into the contest) with great difficulty I had managed a WHOPPing 15 QSOs in the RTTY log.
After some sleep I gave a call to W6JBR for some encouragement
and ideas toward solving the RTTY performance problem.

Numerous cable configurations were tried altho in the end it seemed as if I was back where I started from.  The final solution came from rebooting the laptop a second time, after which things seemed to settle in.

Accompanying the CQ WW contest were the Texas (TXQP) and Maine (MEQP) QSO parties.  En route to solving the RTTY problem I took time off to make 19 QSOs in the log for TXQP, adding 6 more Sunday morning.

For MEQP I managed to work W1WMU on SSB and then CW;
enough to submit a 2 QSO log.  In some respects working the QSO parties allowed me to accomplish something while mulling over the digital audio problems.


By the time I had RTTY under control on Saturday 15 meters was gone and 20 meters was winding down. 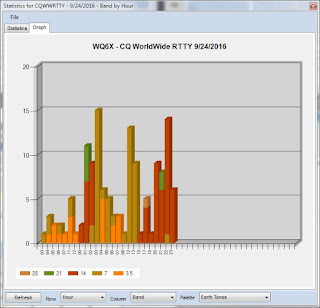 40 meters was PACKED all the way down to 7.033.  Amusingly, I heard a number of CW ragchews in between strong RTTY stations, progressing just fine as if the RTTY wasn't even there; proof non-contest activities can survive, even in a crowded band segment.

Fortunately, the usual intentional QRM on 40 meters Sat./Sun. mornings never materialized.  I guess intentional QRM idiots haven't figured out how to QRM Rtty effectively; so they don't even start.

Ironically, during CW contests I often encounter intentional QRM with the QRM'ers using, none other than, RTTY
to do the job.

It is amazing how close RTTY stations can be interspersed/squeezed together.  Using a combination of the 1000mp's eDSP contour control and  the shift/width controls I was able to tailor the receive passband more precisely using the 2.4 khz filter setting than using the 500 hz filter alone.

Altho I brought along an outboard MFJ 752-C audio filter, I never found time to configure it in the audio line.  The Yaesu's eDSP contour & DNR options turned out to be more than enough.

For me, this year's CQ WW DX RTTY contest was more like an NAQP contest than a DX contest; even though I did manage to Work All Continents (WAC).

The final irony for my participation in this RTTY contest is that by the time it was over the entire RTTY interface (the West Mountain Plug-N-Play unit) had been bypassed.  The receive audio was brought in directly from the 1000mp's AF out jack.

The XMIT audio was directly routed to the mic input, by way of the TV monitor's headphone jack; which also provided ground-loop isolation between the laptop and the radio itself.


Power-wise, throughout the RTTY contest I ran the radio at near full power (approx. 95 watts).  Because of heat considerations most radios (including the hallowed Elecraft K3) must run RTTY at about 50% - 60% of the radio's rated power output.  Because of the excellent ventilation designed into the Yaesu FT-1000mp, by putting the radio above the table with an exposed underside, the radio never once got warm.

Most people sell their Yaesu's to purchase Elecraft K3's; as did the previous owner of my radio.
With minor exceptions, I rate the 1000mp WAY OVER the K3; and I have used a dozen different K3's.  To me, K3's are all alike.  I have yet to see two FT-1000mp's that looked/felt exactly alike.
The MP's have more character.

All last minute ad-HOC radio operations  I am part of present unique challenges; this weekend's difficulties being RTTY based.  Because I was not engaged in "serious" competition this weekend I insured 6 - 8 hours of sleep both nights, altho I got up at 5am both mornings to catch "early birds".

Look for me @ NX6T for this year's CQ WW SSB,
followed by WQ6X solo from W7AYT's QTH for the CW GiG.

For this year's All Asian SSB contest,
I scheduled a business trip to Orange county wrapping things up Friday morning in order that I make the drive to "NashVille" in Fallbrook, California
to join up with the crew @ NX6T.

Because it was labor day weekend we had a shortage of operators, altho we had visits from Tu (AA6TU) a very new ham and Fabio (IZ4AFW) who joined me at 4am on Sunday morning to finish off the night shift as the sun came up.


I have been disappointed in years past by the poor participation of Asian stations (except JA's) in their own contest.  This year things were even worse as the A-index hovered near 40 and the K-index ranged from 4 to 6.  We worked virtually NO stations in the middle east this year, altho we did see
DX spots for those stations; unfortunately from other middle east stations.

Friday afternoon, 15 meters was good for only an hour
with a few QSOs added Saturday and ONE (count'em) one
15 meter QSO all Sunday afternoon and nothing else.
10 meters was a complete no-show @ NX6T for this
contest - Bummer Dewd!


Making up the crew for this GiG included N6KI, WQ6X, KK6NON, N6EEG, N6CY (Remote), W2PWS, WB6NBU
and our visitor from Italy Fabio IZ4AFW.  It turns out that IZ4AFW and WQ6X have made QSOs in several contests, starting with the CQ WW RTTY contest back in 2013, so
I received a QSL card directly; as well as an eyeball QSO
this weekend.

This weekend, on top of all we put up with, we were plagued with NON Asian stations wanting to work us.  Several dozen stateside stations evidently had trouble understanding what "Asia only" means; same thing Sunday morning when I was called by VK4 & VK2 stations (from Australia).

Because I had the antennas pointed to the northwest, those southwest stations were barely S-2.  At one point Saturday morning on 40 meters an XE1 station (Very LOUD) kept calling me and wouldn't go away until I gave him a 2
minute QSO.

QRM-wise, 40 meters was FULL of surprises.  While running a frequency around 09:00z I discovered that 7.145.45 was the national tuneup frequency and a
place for several hams to test their microphones
("Helllllllo!  Helllllllo!").

I was also plagued with someone whistling and playing music, and at 4am I was treated to the long version of "Taps" (trumpet) to wake me up, along with bursts of
RTTY signals every 6 minutes (on 7.134).

Sunday morning (13:16z) shortly after I setup operations on 3.777.77 I was surprised by CW signals saying: "M8JF RIS9", repeating every 15 seconds or so.  Googling these callsigns I discovered that M8JF is the Chinese army and RIS9 is used by the Russian navy.

What the HELL are they doing playing military exercises in our 75 meter phone band?  Don't they have their OWN frequencies?

Overall this was a very frustrating contest event.  Things were soothed somewhat by the appearance of several "rare" stations, such as XX9 (Macao) VR2 (Hong Kong) and JT1 (Mongolia).

There were a lot of spots for rare middle eastern countries.  Unfortunately, their signals never made
it to our antennas - Bummer Dewd! 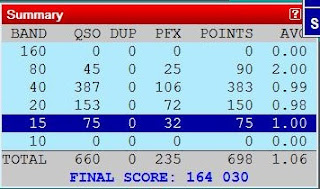 We ended the contest with 660 QSOs and 164k points for what looks like 3rd place world and 1st place for North America, according to the 3830 Scores website.

Checking in with other California stations, N6KI found they were going through much the same frustration we were.  How did things turn out for you?

To fill in the dead air time, I noticed that the Colorado QSO party (COQP) and the Tennessee QSO party (TNQP) events were also happening this weekend.  Unfortunately, typical of state QSO parties (other than the BiG ones like CQP, 7QP and NEQP) these two QSO party events were severely lacking in participation in their own contest event.


That didn't stop me from submitting a log for both QSO parties, despite only a handful of QSOs in each log.  Surprisingly, the Tennessee guys were unsure of how I should log their counties - in
CQP we never have that confusion.  Oh well.  Who knows, I might earn a certificate anyway, as
I did for previous TNQP contests.

Did you play in the All Asian SSB contest?


How many Asian prefixes ended up in YOUR Log? 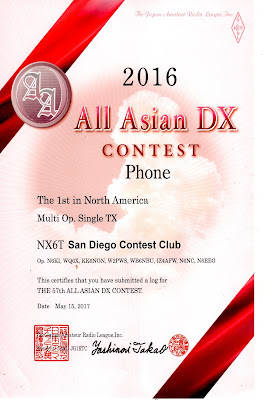