I open this WQ6X Contest Blog entry by welcoming the existence of recently emerged
Solar Cycle #25. (More on this later)

For 2017, the month of September has ushered in a number of radiosport surprises.
As I wrote in the previous Blog Entry this year's All Asian SSB contest turned into a 1 QSO
affair for WQ6X.  Instead, COQP and TNQP received all the attention in the WQ contest activities. 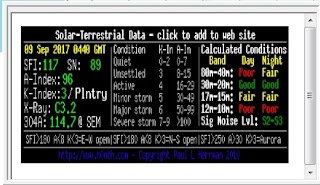 For WQ6X activities, this weekend
was quite similar to the last with a surprising difference: It would seem
(to me anyway) that the end of Solar Cycle 24 has been abruptly transformed into Cycle 25, creating an interesting backdrop to the long-awaited (for Europeans anyway) WAE (Worked
all Europe) SSB contest. 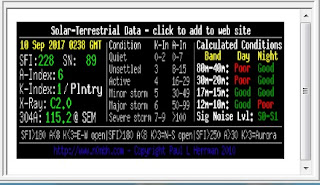 Last month I played around in the CW version of the WAE contest ([CLICK HERE] to read about that). Later this month I will give the RTTY version of this GiG a good run.

Because the antenna system @ W7AYT (where I often run the FT-1000mp portable) doesn't usually do well into Europe, I turned to running as WQ6X remotely from NX6T (Fallbrook, Ca,)
as my solution.

Station #2's computer is out of commission, being given new life by the computer doctor (W6JBR)
in the same way he brought station #1's computer back into action; except that the transmit audio
line FOR STATION #1 was never tested - until this weekend - discovering that there is some sort
of cabling problem. Oooopppsss. What to do? 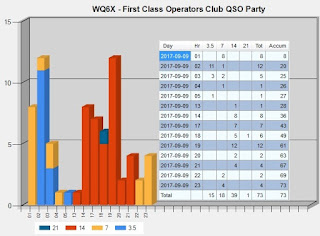 Today (01-03-2018) I received the following certificate for my participation in September's 2017 FOC QSO Party; proof once again that you can't win if you don't play. 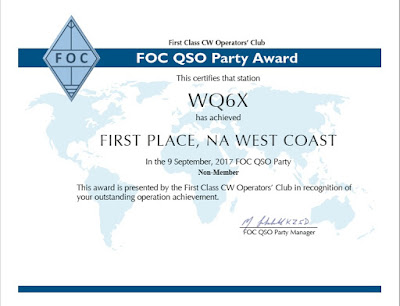 This last weekend was ostensibly to be about the All Asian SSB contest, with minor attention to
the COQP and TNQP QSO parties. As it turns out, the All Asian event turned out to be a complete
BUST; not just for WQ6X and NX6T, but for amateurs the world over.

I was originally planning to operate from NX6T in Fallbrook. A misplaced cellphone sidelined any travel. Next up was an internet outage in Fallbrook which was resolved at the last minute on Friday. Unfortunately, we never worked out what the problem was in playing my WQ6X .Wav files during
a contest with that particular setup. Later, a failing A.C. system @ "NashVille", sidelined the rest
of the operation. 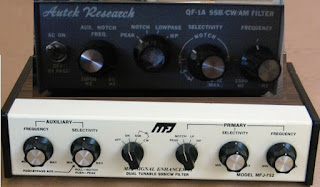 The NX6T outages prompted me to make a last minute operation @W7AYT in Concord (in the SF East Bay).

I ran the usual FT-1000mp with a new external audio filter combination, running the MFJ-752c in the left ear and an Autek QF-1a filter to the right.

Running SO2V, I effectively had DSP
in stereo for CW & SSB.


Because operation in the state QSO parties was run using mixed mode, CW was run with the
Main-RX (Left ear) and SSB with the Sub-RX (Right ear). 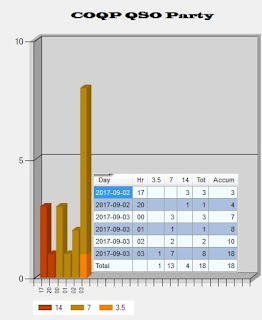 An interesting curiosity occurred with the QF-1a causing a left-right shift between the ears as the Autek's frequency setting was changed.

For the next contest @W7AYT I will run the Autek QF-1A in conjunction with the JPS NIR-12.

For All Asian, I did the best I could with the
limited antenna system @W7AYT, however I
am beginning to think Dennis' Concord, (Ca.)
QTH has an energy vortex enroute to Asia; Oceania is not bad, just Asia.

As usual, my main beef with the All Asian contest is that not enough Asian stations participate in their own event and/or are hearable with the combo CH-250 Vertical and a Horizontal VEE @W7AYT. 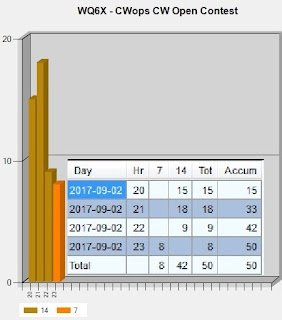 For the COQP QSO party, I didn't get started until 17:20. 20 meters quickly went long and 15 never materialized so I switched to the CWops Open contest.

This was my 1st time running a CWops GiG; surprising when you consider how long it has been around. (Next time around during the next CWops Open, look for me to run all 3 events.) What I like about CWops is the short 4-hour length - like SPRINT, but w/o the QSY pandemonium.

When CWops ended at 00:00z the 40 meter band showed promise to Colorado and eventually on SSB as well.


Unfortunately, Colorado participation was noticeably lacking on 40 & 80 meters; on BOTH CW and SSB. Asia wasn't really happening so QSO party operators should have FLOODed the lower bands. What am I missing here?


TNQP materialized at 18:00z on Sunday. Unfortunately, similar to All Asian, my main beef with TNQP is that ONLY a handful of TN stations are hearable with the combo CH-250 Vertical and a Horizontal VEE. Considering the size of our CQP (California QSO Party) event, GiGs like COQP and TNQP are a disappointment by comparison. During CQP ALL 58 counties sport fixed station representation.

In most other state QSO parties (TNQP in particular), reliance on "rover" operations is essential.
I enjoy QSO parties so you can be sure I'll be back next year - especially if the All Asian contest
is a bust like it was here this year.


Considering the limited antenna resources
at W7AYT (a CH-250 Vertical and a Cobra horizontal Vee) as an alternative to All Asian activity I chose to spend time with the DXMaps.Com website.

It has been quite a learning experience to bring up a band display for, say, 40 meters, take a screen shot of the BE-4 condition and then issue some sort of contest CQ call, monitoring how long it takes for the WQ6X callsign to show
up on the DX-Map.

Usually the WQ6X call appeared in under 30 - 60 seconds, and yet, there seemed to be no takers. At one point I was beginning to think
that I was louder on the other end than stations are in Concord. 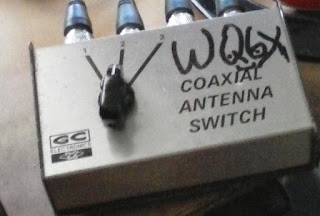 I then raised the question of which antenna was being heard where.
Using the WQ6X coax switch (along
with the A/B switch of the FT-1000mp)
it is easy to select either antenna;
and if desired, the two cables can
be paralleled together.

On 40 & 80, calling CQ with JUST the Cobra-Vee elicited no spots. Switching to the CH-250 immediately brought several spots in Oregon, Washington, and eventually Utah. Paralleling the two often produced a path towards Arizona.

During the last 1/2 hour of the CWops GiG, 40 meters made a west coast appearance, being what
20 meters was like 1/2 hour before. If I could make even HALF of the QSOs that are implied in this picture, this weekend would have been a total success. Unfortunately, statistics don't always
bring us the truth.

While I only published this one picture (so as not to overrun the whole concept), using the NeuroLogiK Solutions SNAP-SHOT program allowed me to make nearly 3-dozen screen
captures documenting the several hours of CQ'ing .vs. antenna testing that was run from
W7AYT. 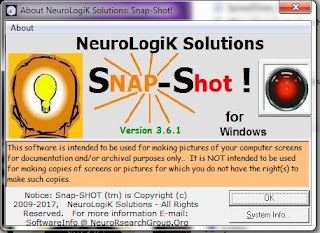 More than just Alt-Prtsc, with Snap-Shot I am able to capture, timestamp and organize the unique screen images that you see throughout the WQ6X Contest BLOG entries.

Looking back on this last weekend, the way things turned out reminds me of how my local Toastmaster's club (The Alameda Tongue Twisters) works.


We often experience last minute changes to our meeting structure (as happened last night), and yet, we ALWAYS rise to the occasion and make it all work; often learning new things in the process.

Last-minute learning was certainly a factor for WQ6X in last weekend's contest mélange'.

Did YOU participate in COQP, TNQP, CWops or the All Asian contest?

How many QSOs did you add to YOUR Log?

ADDENDUM:
Received today (12-18-17) was the following certificate from the TNQP: 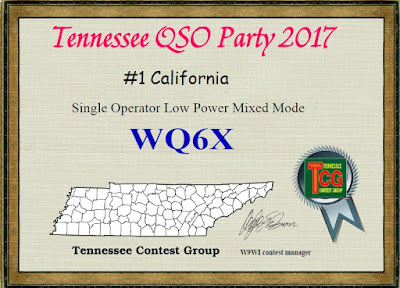