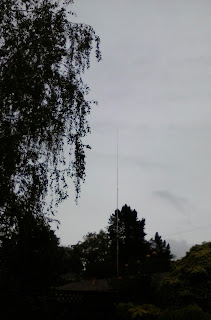 For JIDX 2016 client commitments relegated me to remain in the SF bay area so I setup the Yaesu FT-1000mp at W7AYT's QTH, allowing us to test his newly installed Comet CH-250 Vertical antenna.  As in years past, I registered the W6J callsign to commemorate the Fukushima cleanup actions.

Originally, the setup began with just a Toshiba computer.
Later it occurred to me I could effect an HDMI hookup to
a 35" Sony TV in the room as the contest monitor.

Opening conditions were not all that great.   40 meters was quite limited.  A couple of weak JA's could be heard on 80, but no QSOs made in this contest even though several listen periods were made both evenings and a series of CQ calls in the last few hours of the contest. 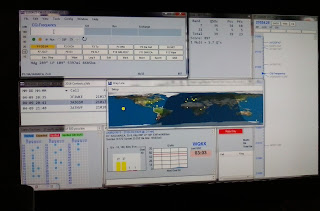 The weak signals or lack of them probably had as much to do with the use of a vertical as did the poor solar conditions.

One of the BEST sounding JA signals was a JA0/6Y5 station who always had a pile-up of JA stations to work.

Unfortunately, in the JIDX  contest, 6Y5 prefixes don't count for stations like W6J.

This weekend was shared by the GA and NM QSO parties (during which I heard very few stations and worked none), as well as the Yuri Gagarin DX contest, during which I managed to work two stations: one stateside and one in Russia.


10 meters was a complete no-show, while 15 meters was the way 10 meters often is; it seemed dead and then a JA station would jump out at S-7 or more.
Signals on 20 meters were also lacking, making the "best" DX band quite a disappointment.

As you can see I WAS being heard in Japan on 20 meters. 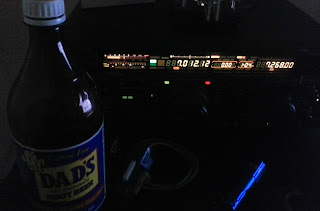 40 meters finally came alive 24 hours into the contest.  Luckily, for this contest, the only "intentional" QRM came from JA stations tuning up on frequency before calling me - at least I got the QSO.


Because the 1000mp's auto-notch is so good it can't be used on CW; however the manual notch really worked well here.

Amazing enough, no Russian beacon stations were heard on 7.039.

Unlike previous JIDX contests, this year all the JA stations I worked knew their prefecture #; confusion on this usually occurs only in SSB JIDX contests.


For people who know their way around JA callsigns and prefecture numbers, these are easily verifiable.  Because signal levels were so marginal I managed only 32 prefectures out of the possible 47.  Next year will always be better.

As I report in every blog entry on JIDX contests (and Asian contests in general), my biggest beef with these events is not enough participation by the target stations themselves; in this case, the Japanese.
Looking at the QSO total for NX6T (800+ for 2016 versus 1000+ last year) this would seem quite evident.
Then again, had I joined the team at NX6T, with my after midnite assistance the total might have been as high as 1100+ - who nose.  While I am bummed that I couldn't join up with NX6T, I enjoyed myself. 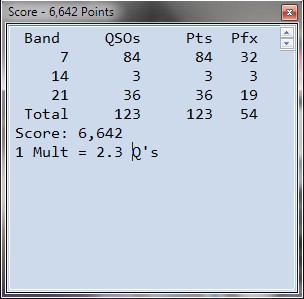 As you can see from the stats, 40-meters was my best band influencing my decision to submit the log as a single band 40 meter entry.

Based on that submission, it looks like WQ6X will take 1st place for North America in the 40 meter low power category.  Go Figure!


Did YOU play in the JIDX contest?
How many different prefectures
are in YOUR log?