What can I say about the
2017 ARRL 10-Meter Contest?
Considering that we are currently
at the bottom of solar cycle 24,
I wasn't expecting a lot, however
I CERTAINLY didn't see THIS coming. While the A & K indexes were low,
so was the solar flux (SFI) - around
70 - Bummer Dewd.
(In retrospect, we should have conducted an emergency run of the
10-Meter contest during that false-hope 150+ spike in the SFI back in Sept.) 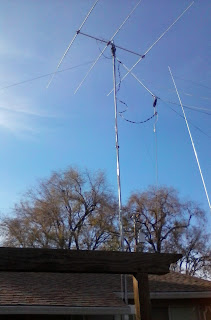 Operating portable from W7AYT's QTH, I gave the newly installed (October) Hy-Gain 3-element 10-meter yagi a good workout. The antenna had such a "narrow beam-width" that when I happened onto the "Colorado corridor) (around 06:10z) 4 Colorado stations hit the log almost immediately; however without the peak capabilities of
the outboard QF-1A filters, they would have been lost
to the noise.

This year's 10-meter event was largely a CW affair; my condolences to the SSB only operations. Throughout
the weekend I put out lengthy CQ calls on 28484.84 & 28434.34, with only a handful of takers. It seems to
me that people gave up too quickly.

Normally I would not work 10-meters past about 03:30z. Continuing another 4 hours made a big difference as that
is when several northeast multipliers made it into the log.


Altho I technically ran as an SO2-V (2 Vfo's) operation, there was so little SSB activity that SO2-V for cross-mode work was virtually unnecessary". However for CW, I could run a frequency using RX-A while S&P'ing bandmap spots with RX-B.

Running SO2-V was much easier with an Autek QF-1A audio filter for each ear, which allowed me to simulate what is known as stereo-CW. Properly wired, with stereo-CW a signal will shift from one ear to the other while tuning "THRU" the signal (either up OR down).

While the actual QSO count in this weekend's GiG was noticeably lacking, the FT-1000mp's outboard wiring was given a a through shake-down. Simplifying audio cable clusters made the audio filter trial/error proceed more smoothly.

Because of the strange noise characteristics during the contest, the FT-1000mp's eDSP Contour/NR knobs we constantly being juggled, looking for that EXACT combination with the QF-1A filters to bring a marginal signal through. Despite all that, no states east of Colorado & Arizona made it to the log; they were simply not even HEARD.

While WQ6X CW QSOs were occasionally spotted, I think most stations either heard my call randomly, or by slowly and patiently tuning the bands. While I ran assisted, spots often disappeared as quickly as they appeared. Typing in manual spots for those frequencies kept them around longer. Unfortunately, because of weak signals there were numerous partial callsigns positioned luckily next to a callsign correction; but not always - hence the frustration. 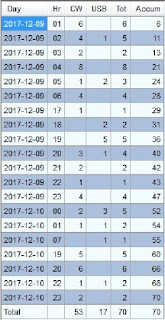 As disappointed as I was with the QSO totals in this GiG, reading score submission reports from all call areas it is clear that my experience was hardly unique. While the 10-meter contest seemed more like the California QSO Party, in the midst of it all, CW5W and PT3T made it into the log Saturday afternoon. Spots were seen for KH6 and several VE6's & VE-4's stations, but you can't work'em if you can't hear'em.

Typical of most 48 hour contests, on Sunday, paint was drying faster than I could make QSOs. The real accomplishment was to hear my good friend N6GEO calling me on SSB. A QSX to 14.032 picked him up on CW as well. He was 1 of only 2 other stations that worked WQ6X multi-mode. Pointing the yagi towards Twain Harte made the CW QSO possible. Were we communicating via skip, or (more likely) ground wave?

That evening I worked W7AYT as he ran his FT-450D into the CHA-250 vertical, also at the QTH. This was technically his FIRST contest QSO - how cool is that?!


During a recent contest, I received
a visit by the local cable guy to check their pole-based equipment.  For the ARRL 10-meter contest he was back again.

A few questions and answers between us pinpointed that their equipment is susceptible to 2nd harmonic interference from 28mhz
(i.e.. 10 meters).


What Dingle Dork came up with the brilliance to park a system critical component on a frequency which is the 2nd harmonic of a potentially signal-riddled amateur band; amateurs can run up to
1.5kw, which can envelope cable equipment. Pointing the antenna towards the Southeast and
South America positioned the yagi; in an end-fire null-position of the cable unit.

However point the antenna to the Southwest (Oceana) or Northeast USA, the antenna
is then BROADSIDE to the cable equipment; over-powering it and disrupting it.
While the yagi's F/B is 24db, that close, -24dbm means nothing.
My next operation @W7AYT is not for a few weeks; there's time for
them to get their act together. Can you say "Faraday" shielding?
We shall soon know the answer. 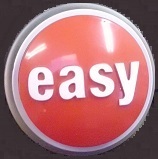 When I think back on it, the poor 10-meter propagation kept me CQ'ing more which kept the cable equipment offline longer; until nearly 07:00z (10pm) on Friday AND Saturday evening; primetime cable viewing time.

You have heard me say "When in Doubt CHEAT, but within the rules".  I even wrote a BLOG entry about this.  [CLICK] here to read that BLOG Entry.  Along this line, I saw fit to employ an EASY button bringing humor into this deplorably dismal 10-meter contest.

The 2017 ARRL 10-meter contest is now "ancient history". It would seem that my complaints (other than the cable problem) were shared by most amateurs around North America; altho to varying degrees. From the East Bay (EB) section, evening propagation to the North Northeast direction
was a noticeable reality Friday evening; whereas as Saturday evening, no such path was evident.

Based on score submissions to the 3830 Scores website, it would seem that WQ6X took a 1st place for East Bay section and a 2nd place for W6 (California). That is based on the assumption that
the Log Checking Robot (LCR) doesn't ding my submitted score too much.

Do YOU work the ARRL 10-meter contest.

Did YOU survive the horrible condx?

P.S. The wildfires which threatened NX6T died out just a mile from the hilltop.
N6KI operated from home until Sunday when Dennis and K6AM (John) put NX6T
on the air for a few hours.
Posted by WQ6X at 1:57 PM No comments:

Similar to last year, I dual-OP'd remotely with N6KI (Dennis) while he manned the OP chair live @ NX6T in Fallbrook (aka "NashVille"). Because Dennis was the lone operator atop the mountain, motor-raising tower #2 to 70' (23mh) was a one-man CHORE - Thanks Dennis.

Using WinTest to run the K3 into an ACOM 2000a,
NX6T started running a frequency @ 01:30z, immediately
hitting the 100/hr QSO rate for the first couple of hours.
At 04:00z when I took over (remotely) for the dinner shift there were already 247 QSOs in the log. S&P'ing and then running frequencies, I managed another 133 QSOs in the log by the time N6KI took over @06:30z.

What stood out in this 160 meter contest (to put it bluntly) were the numerous ASSHOLE operators.


While I don't normally name callsigns, for this GiG, the RUDENESS of N6ZFO, W1SRT and XE2S notably stood out and were completely uncalled for.

JUMPing on a frequency (already in use for over an hour) with 3KW and BELLERing "CQ CONTEST", without listening FIRST and sending "QRL?" second is completely LID behavior, prompting me to send "QRL QSY"; and when he didn't get it, I sent "QRL QSY LID" - eventually slinking away down 1.2kc to "remind" me he was still around. Turns out I was louder than XE2S;
it took him 18+ minutes of no QSOs to get the message and move on.

﻿ During this fiasco, diverting the laptop audio thru an MFJ-752C notch filter I was able to reduce his barrage enough to copy stations who were smart enough to call me PRECISELY on frequency. (In the end. being ON Frequency reaps BiG dividends - ME).
Making only 12 QSOs in 18 minutes is not great, however it certainly is > 0.

Saturday afternoon, by 23:00z 160 meters began
to flutter open. After haphazard S&P'ing at 00:55z I parked NX6T on 1.820 and literally heard the signal levels emerge further and further eastward.
N6KI took the helm at 02:00z.

Because we had worked so many stations, Dennis went on a multiplier feeding frenzy, which was good
for the log. Thanks to his section skeet-shooting we managed 81 out of the 83 ARRL sections; missing
only NL & PR - Go Figure.

When I came back at 09:15z I continued the S&P and then settled in for 2 hours of intermittent frequency running. It was around this time some internet latency crept in. When that occurs, I make sure the auto-repeat CQ option of N1MM+ is turned OFF; I don't want to be knocked out (yes it HAS happened) while the remote station CQ's endlessly. Luckily, I can usually reconnect within a minute
or two to press the [Esc] key - Errrrk! 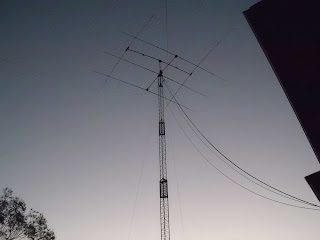 Evidently our slouchy inverted VEE managed to skip a signal across the east-coast "pond" - how nice is that?!


After the 160 contest was over I had hoped to find some time for the 10-meter RTTY contest
(a sort of pre-cursor to the ARRL 10-meter contest the following weekend (altho the 10-meter contest
doesn't support RTTY). Nevertheless, I found JUST enough time to call CQ, eventually putting
4 QSOs into the log.  In case you're wondering, yes, I DiD send in a WQ6X log and added the
score to my WQ6X submissions list on 3830Scores website.


Based on the 3830 Scores website, it would seem that NX6T's 154k point score has taken a 1st place for San Diego section and 2nd place for the Southwest Division. Not bad for a couple of Old Pharts.


Who would have guessed just 3-4 days later the raging Fallbrook fires would come within
1 mile of the "NashVille" operation. Is this a LAST BREATH for NX6T on the mountain?
Stay tuned for the upcoming ARRL 10-meter contest BLOG entry to find out.