2015 marked one of the most dismal ARRL 10-meter contests I've ever been a part of.
Between work commitments, a hastily assembled 2nd story portable operation and horrible
space weather, I amassed only 3 dozen QSOs. 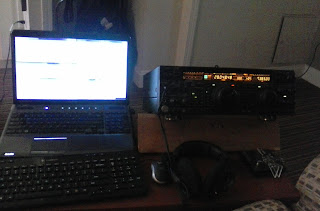 In order to make things easier to setup, I chose to run CW only.
To computer run CW I use a West Mountain Plug-N-Play unit for keying the Yaesu FT-1000MP.

Because I operated from a 2nd story hotel room, antenna-wise a Cobra dipole was draped 1/2
across the ceiling, and 1/2 hung out the window.  While the 1000MP was able to tune this dipole sometimes the tuner gears needed some grinding before a match could be worked out.   When
I later encountered problematic RFI floating around the room, that the tuner  took so long doesn't
now surprise me.  At one point I got a laser-point RF burn when my hand bumped one of the wires
on the 4:1 balun.  Indoor antennas always have some nice surprises.

While I ran only CW, I made use of the DUAL receive capability in the 1000MP by putting the 2nd receiver into phone band looking for area openings.  The 1000MP has excellent audio mixing abilities; one receiver in each air.  Because I ran as ASSISTED, the bandmap helped me locate new multipliers.

I was not able to setup before the contest and missed whatever band opening existed in the first 4 hours of the contest.  So in fact, I made the 1st QSO mid Saturday morning. 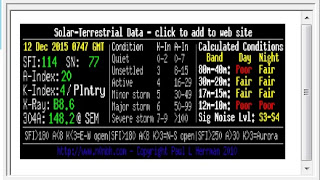 10-meter band conditions were poor
all weekend from my east bay location.

As it turns out, most Californians had
a similar experience.  During my hours on the air Europe and Africa never materialized; either in the receiver
or on the bandmap.  I saw many VK's ZL's and JA's in the bandmap but
never heard any of them.


While I could work everyone I heard,  that reach was only as far as Canada, the U.S., Mexico and Bonaire.  Because the signals were often weak, I made extensive use of the Yaesu's contour control and pair of 250-hz filters to pop stations above the noise. 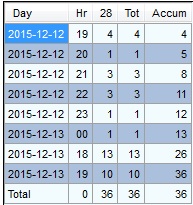 Due to a late morning band opening and afternoon work commitments I barely had time for 90 minutes of operation on Sunday.  When I arrived back at the hotel at 23:30z 10 meters was already gone for the day leaving me with a grand total of 36 QSOs in the log.


While this year's 10-meter contest was a ho-hummer (years past events have resulted in 1st place finishes from EB section), what was important is that the newly acquired
FT-1000MP was put through a number of difficult situations which needed to be tested.


For example, the previous radio owner had installed a pair of 250 hz filters yet never enabled them via the menu system.  I was not aware these filters were even installed until I attempted to menu enable them and found that they existed and worked.

This year's 10-meter contest provided verification of the fact that solar cycle 24 is nearing its end.
While summertime brings increased 10-meter activity, the winter months ahead will find fewer/poorer band openings.  However just because 10 meters sounds dead does not mean there is no available activity.
If everybody is listening and no one is calling CQ, the band may appear to be dead.
When in doubt, put in a call yourself - you may be surprised at who returns that call.

During last year's 10 meter contest, while the band seemed rather quiet at 3:30z (7:30 pm local time),
a "CQ contest" flushed out over a dozen stations lurking about.  When you work a station calling
CQ contest at times like this, be sure to spot the station in one or more DX clusters.
Operators seeing it popped into their bandmap will then be more likely to spend
more time on the seemingly "dead" band - something to THINGK about.

Even with declining sunspot activity, 10 meters can be a lot of challenging fun.

Did you work this year's 10 meter contest?

Is WQ6X one of the rare QSOs in your log? 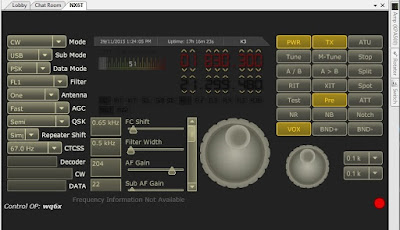 For the 2015 ARRL 160-Meter contest I was unable to make it to Fallbrook for an NX6T multi-OP GiG.  Evidently neither could anyone else, so Dennis N6KI opted to run solo.  He offered up STN#1 for me to run remote after 1am local time.  Unfortunately, Saturday morning, the remote hookup was out of commission which left me with 6 hours Sunday morning for WQ6X to make an appearance on 160 meters. 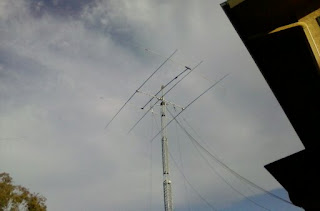 Equipment-wise, I ran a K3 radio thru a KPA-500 amplifier into a 160-dipole @ 70 feet broadside Northeast / Southwest.  Running the amplifer during a remote operation was a risk because if an operational fault were to occur with the amp not only would I not have 500 watts but would be running at the 30-watt drive level the K3 was set at.
Luckily, that never happened.

Because I started at the tail end of the contest I  decided to spend my first operating hour running stations on 1.806.  Everyone was so desperate for new callsigns that they lined-up to work another RARE California station.  During that hour I handed out nearly 60 QSOs.

For those stations who heard me, if my operation seemed a bit erratic  it was due to internet latency disrupting an otherwise orderly operation.  A number of times the internet connection would deteriorate requiring me to quickly reestablish the connection; at which time the internet latency would drop to under 0.8 seconds.  Nearly a dozen function key macros allowed me to run as if I was using a keyer paddle at the radio itself.

When the contest ended at 7am,  I had managed 156 QSOs in 48 sections; not bad for under 6 hours of OP time.  While I win no awards for this operation it was fun to work 160 and even more exciting to run it remotely from the SF bay area. 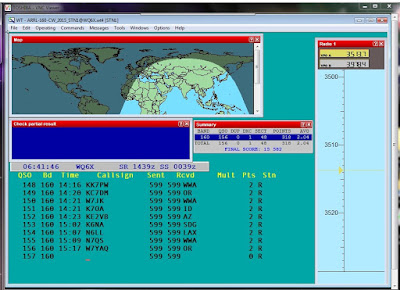 This weekend's CQ WW contest was one of the uniquely WILD contest runs I have ever done.
What made this weekend different is that instead of a long drive to Fallbrook to operate the NX6T station (aka "Nashville"), I chose to run as WQ6X but REMOTELY from the NX6T location.
Friday evening I ran 80 & 40 meters from the  Pismo Beach Quality Inn.
Saturday evening and all day Sunday I operated from the Burbank Quality Inn.
As it turns out, while I was running STN#1 remotely STN#2 was being retrofitted with
"Version 2" of remote access. 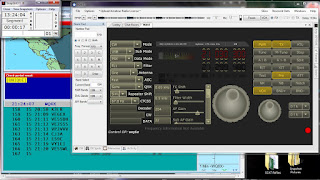 With remote operation, internet latency is a primary concern.   Because of latency issues, had this been an
SSB contest I don't think it would
have worked.
Luckily, for CW, all transmission originations occurred on the NX6T
end of things; the only audio
transmitted was from the receiver.
I typically experienced latency of approximately 0.5 - 0.8 seconds.


When it would slow down to 2 - 3 seconds, I would disconnect and reconnect to bring it all back.
Because the contest was function key driven, I didn't need to figure out how employ an external keying paddle.

For logging WinTest was the program of choice.
Like N1MM, function key macros allow 95+ of contest activity to be handled with no problem.
For unusual situations using Alt-K to type takes care of the rest. 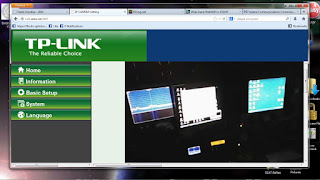 The radio was an Elecraft K3 running barefoot into a C-31 Yagi for the upper bands, a 2-el 40 meter yagi and a semi inverted Vee for 80 meters.  Being that Fallbrook is already 900' above sea level, my low power signal held its own.
I was able to bust major pileups on the 1st call over 70% of the time.   Rarely did I have to call more than 2 or 3 or more times. 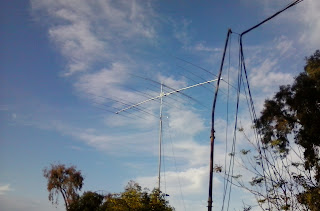 I believe one thing that helped is WQ6X callsign recognition from other contests, including CQ WW from last month.
This is another reason to submit a log, not only to the contest hosts but also to SuperCheckPartial.Com.

My biggest beef this year is with stations like OL5T who call CQ and then wait 0.5 secs before calling the next CQ.  Not surprising they made few QSOs during that period because by the time we take 1-second to decide if we should press FK-4, they are calling CQ again.

I hear this kind of behavior in most major CW contests and wonder what the operators behind this are or are not thinking.  Frequently when I look up their callsigns I see that their QSO total is not in the top 10 - gee I wonder why?!

Another beef is a station who is running a frequency and disappears every minute or so.
I now realize that means the station is either running SO2-R or multiple transmitters with a lock-out mechanism.  If I were not running remote I would have done what I now do in these situations.
If the station makes no reply to 3 calls and does not call CQ I send "QRL?" twice.
If still no reply then the frequency is now mine and I begin calling CQ.
Should the station come back I remind them that they stopped using it so now I am.
On CW I simply send "QRL - QSY" and then continue running the frequency.

My main beef with the above scenario is that the bands are already crowded during contest periods.  Unless you are running Multi-2 or Multi-Multi, to hog 2 frequencies concurrently is a violation of contest ethics, or at least overall fairness. 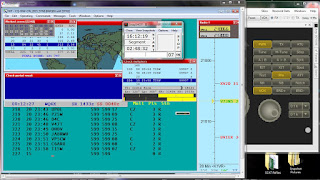 Region wise I was disappointed in
the turn out from Oceania - in the SSB contest they were everywhere.
Conversely, I was also surprised by the plethora of Canadian stations on the air.
While they are only 2 points for us Californians, they are an easy 2 points.
South America and European stations were everywhere this year.
As usual, I heard few stations from Africa but worked virtually everything
I heard.

QRM-wise, I was disappointed in the filter system of the K3 this weekend, making me wish I could have been running the FT-1000MP.  The rig control software for this operation didn't make it easy to invoke the DSP & shift facilities in the K3.  The 500hz filter seemed like a 1800hz filter in the presence of S9+ signals.  Oh well you can't have everything.

Amazingly, there was very little weird 40-meter QRM; no belches or VFO swoops or strange
RTTY - I didn't even hear the illegal South American SSB stations in the CW band.
What DiD stand out however was a BUZZER sound on 7004.72 @ 14:00z - WEIRD! 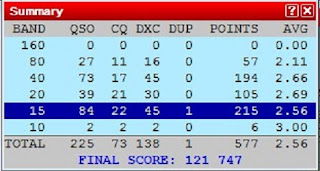 In total, I managed nearly 24 hours of actual operating time.  I was able to make a presence on all bands (80 - 10 meters)  when propagation permitted it.

Shortly after the contest the SFI went
on a decline and the atmospheric noise worsened.

During the contest because I had no way to rotate the antennas, any positional-related noise could not be eliminated by turning the antenna(s).


While getting setup for remote operation requires a lot of software downloads/installs, once done it seems to flow rather smoothly; although for the future extending the desktop onto an external monitor would make things a LoT easier.

So now, the question is: which contest do I run remote next?