The last weekend in May once again found me in Fallbrook lending my WQ6X callsign to the 2014 WPX CW contest.  Just days before, seasonal fires raged through another corner of Fallbrook , somehow missing the turn up Olive Mill road. 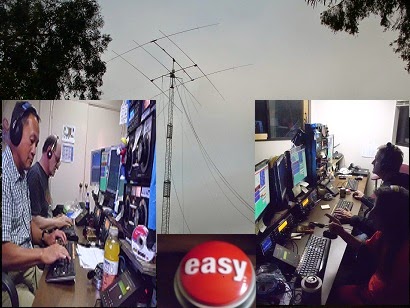 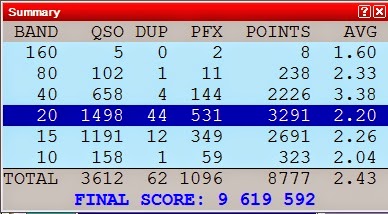 So while we don't get no wood (plaque) for this contest, we got a stroke for our NOT-Insignificant EGOs thanks to an e-mail notice from N6KI:

"BTW, I just learned from the great contest score statistician John, K6AM, that we have set the W6 all time record for M/2 HP Category for ALL TIME. World Class OPs, John K6AM and Danny N6MJ with the help of Jim W6YI had previously held the W6 record in 2010 with 6 Million+ points and
we blew that record out of the water with our 9.6 Million Points"

On WPX Sunday afternoon I managed to put together a cheesy YouTube video of the WQ6X WPX operation.

Overall, we were not plagued with any major problems EXCEPT for the solar noise.  We no longer bomb the internet router on 160-meters, we've determined the correct tower height for both pairs
of antennas, the ACOM 2000's no longer take transmitting faults, the logging software no longer crashes and we've worked out the kinks in the between-radio interlock system.  Unfortunately,
the most important variable (the sun) we CAN'T control; all we can do is attempt to predict what its activities will do to world-wide radio propagation.  For contest weekend the Solar Flux was a dismal 111 and the K-Index jumped all over from 2 to 5 - Yuckkkkkk.

Dennis (N6KI) by pure accident discovered a number of keyboard/mouse key combinations evidently built-in to the Wintest software that don't seem to be documented - makes me wonder what ELSE the software can do that even we registered users don't know anything about.

Now, allow me to address the issue of intentional JAMMING.  While it is true that this year's
WPX contest FLOODED the CW bands with a cacophony of signals sending "nothing but serial #'s", that does not make it right to intentionally JAM specific stations; even if we ARE loud.   40-meters is always a target for illegal operations.  We have been putting up with illegal South American SSB stations below 7.025 for many years.  In addition to those idiots, this weekend included weird forms
of non-U.S. RTTY (between 7.025 - 7.038) and of course the VERY LOUD Russian "K" beacon. 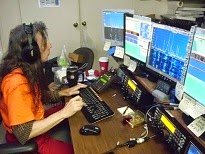 Although not officially designated as such, I believe that 7.030 was this weekend's "National Tune-UP Frequency"; at least while I was doing a WPX run there.  Around 09:30z the incessant tuning-up began.  Then, I was barraged with "CQ CQ CQ" and  "CQ DX  CQ DX" with no identifying callsign.
I moved to 7032.5 and within a minute the CQ'er moved up to join me.    After struggling to copy
weak stations under this idiot, I realized that we had under-utilized 80 meters and made a switch
to 3516 picking up 30 Q's and then one more from 160.  When I came back to 40-meters, the
jammer (but not the "K" beacon) had gone to bed, probably PROUD that he chased off one
more of them  "pesky contesters".

Speaking of 160, although there isn't a lot of action there, we shouldn't ignore the band either.
While we only made 5 QSOs on 160, two of them I made were new prefixes, which in the end
were worth 16k points.  Without the 160 operation we would have MISSED those prefixes.
I would like to believe that WQ6 was a new prefix for those stations as well.

This weekend because I ran a LoT of frequencies, it was nice so get "WQ6X Spotted"
messages, including a pair from the new N6GEO Skimmer - thanks George.

A few operating tips are in order:
So, did you play in the WPX contest?
Did YOU get the message through?
Posted by WQ6X at 4:49 PM No comments: