Most DX'ers & Contesters are
familiar w/the NCDXF Beacons.
Last year I described how I make
use of the NCDXF beacons, leading
to design of the WQ6X Beacon Tracker software.  [CLICK HERE] to read that original BLOG Entry.

I have long wished for a 40 meter equivalent of a NCDXF beacon, ideally, one that signals every second.

It occurred to me that the main use for such beacons would revolve around the middle east - thru Moscow and on to E. Asia.

As a member of the San Diego Contest club, I often joke that the only real reason they invite me to play @ NX6T in Fallbrook, is because I'm willing to run the 1am to 7am shift.  It was during one of my live visits to Fallbrook during a JIDX contest that during an S&P (Search & Pounce) session, pointing the Shorty-40 [yagi] to Asia revealed a series of "Letter" Beacons, on or about ~ 7.039.  Because their origin is various locations throughout Russia, they have been termed the Russian [military] "Single Letter" beacons.

If you have access to back issues of Popular Communications, the December 1984 (P.30) issue contains an excellent write up on "Single Letter Beacons"; the beacon network overall. The January 1985 issue includes Part-2 of this discussion, specifically documenting the SLB-Clusters such as the one(s) on 7.039.  What amazes me is the timelessness of those articles - 35 years later, most of the data is still relatively relevant. 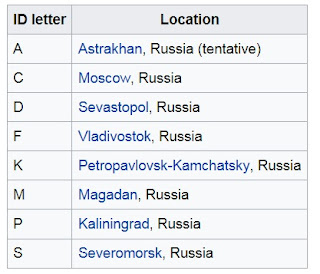 The list (on the right) summarizes the stations more likely to be heard from
the West Coast.

If everyone is listening and no one is calling CQ, the band can appear to be dead.  When I hear the beacons coming thru, I find a relevant clear frequency (Ex: 7021.21) and call CQ.

Having access to these Single Letter Beacons (SLB's) is yet another reason for being capable of copying simple-CW.  Many of the letter beacons operate on numerous non-Amateur frequencies which bracket the amateur bands.  Saving these frequencies in the radio's memory allows propagation checking as band openings come and go.

Do you ever use the NCDXF and SLB beacons?
What discoveries have YOU made?

Last year I ran an internet search on the beacons and came up with the following significant entries: