WHY I Do Radiosport - PT. 4 - Portable Preparedness

In preparation for the 4th installment of the "WHY I Do Radiosport" series I reflected back to my letter to the ARRL editor that was published back in May of 2017.  Here is the reprint of that letter along with a few thoughts to go along with it. 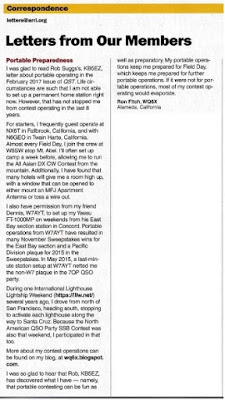 A long time ago, I had all number of excuses as to why
I was not able to engage in radiosport activities, including no "home QTH", poor antennas, inadequate radio equipment and no convenient place to setup that equipment even if I DiD have it.

In 2000, not only did I switch callsigns (from KX6H to WQ6X) I took a more pro-active approach to radiosport activities, beginning by guest-OP'ing with the crew @ the W6ML CQP operations from Mammoth lakes (MONO county).  ([CLICK HERE] to read about WQ6X's CQP involvement from 2000 and beyond.

As you can see from the CQP website, beginning in 2004 (when W6KC returned to solo CQP activities) I began running portable operations from newly-built houses in OJAI (Ventura County), allowing me to run CQP and SS (Sweepstakes) events from the SB (Santa Barbara) ARRL section.

Because I love camping and trying out different styles of portable operating, I did not allow not having a home QTH to keep me off the air during key radiosport events.

A major reason I do radiosport is to take advantage of my creative genius and find unique ways to make temporary operations work towards actually winning certificates and plaques.


Eventually, some newer state-of-the-art radios were added to my repertoire however I was still lacking quality locations to operate from.  One solution was to operate the All Asian DX Contest from the W6SW campsite atop Mt. Abel (48 mi. N/E of LAX @ 8200' above sea level).  In Sept 2012 I made a special trip to the mountain to run AA-Ssb.  In 2013, I arrived at the W6SW mountain site a week in advance to run the AA-Cw, playing around with antenna configurations in time for the 2013-FD event.

When my Biofeedback practice brought me back to the SF bay area in 2010, trips to OJAI were no longer convenient and needed a replacement.  One solution was to house sit for people who were
ok with WQ6X operations from back patios and/or using the ever-cool Coleman Insta-tent.

Hotel rooms (from above the ground floor) provided many operating operations.  The N6GEO QTH in Brentwood provided me many opportunities to run Single-OP or join up with George to effect some sort of Multi-2 event.

In 2011, WQ6X ran the Hawaiian QSP party from Mt. Diablo in the SF bay area.  While not as high up as Mt. Able, it did offer an easy access to the "Pacific Pond" (which is where the Hawaiian islands are located). 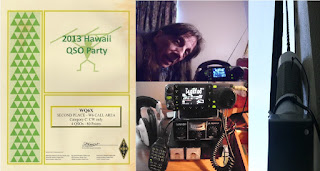 As you can see, these events are ALL different; different contests, from different locations, for different reasons.  One of the reasons I do radiosport the way I do is that I am never bored; each location has its merits and its challenges.  While most portable events don't yield certificates and awards, the ones that DO win make it even more satisfying and keep me excited for the next set
of GiGs.

Have you ever run radiosport events from portable / field day-like settings?
How did it turn out?
Is WQ6X, N6GEO or NX6T in any of YOUR logs?
Posted by WQ6X at 12:42 AM