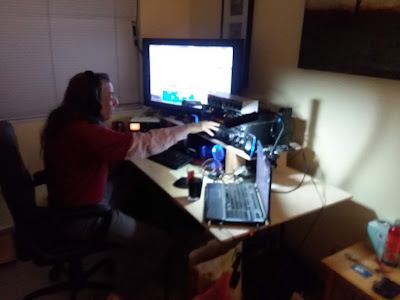 It seems less than a month ago that I was dual-OP'ing the WPX Ssb contest; in fact it's been nearly 60 days.  One of my favorite aspects of the WPX GiGs is the plethora of truly "Weird" prefixes that come about as a result of this 48 hour contest.

Being a Cw contest, my vocal chords are spared wear/tear.  The real challenge was attempting
to set up the Elecraft K3/0 on Thursday evening.  In the end, the K3/0 sat here "looking pretty"
while I utilized the tried/true RCForb remote radio software to give remote K3 access.

As always, it "pays" to have several levels of backup plan for each level of operation.
Arriving @ W7AYT Thursday afternoon allowed thorough testing of the onsite antennas: 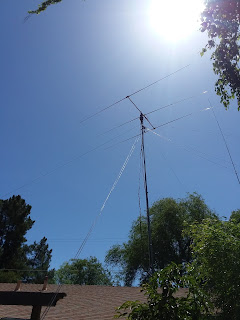 Thanks to a revamped ground cable between the
FT-1000mp and the MFJ 949-E tuner, RFI SEEMS to be a thing of the past (altho we will conveniently ignore the "BLUE Screen" crash Saturday afternoon).

While the WQ6X setup @W7AYT was relatively trouble-free, the remote connection to NX6T was fraught with problems.  A couple of STN-1 re-Boots
@ NX6T was necessary before remote access finally settled in. 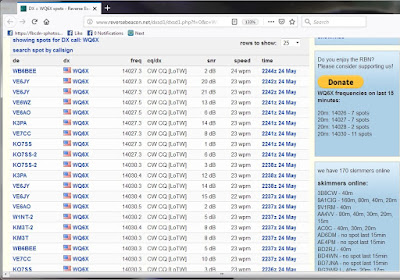 Friday afternoon while testing each of the onsite antennas, the RBN (Reverse Beacon Network) allowed me to call CQ on each band, rotating through the array of antennas, confirming signal strength differences and directional parameters.  While the RBN provided no info on 10 or 15
meters this weekend, 20 & 40 meters provided several dozen signal reports.

What I found MOST amazing during this contest was the virtual lack of "intentional" QRM;
no Data Crankers, no weird RTTY, no chipmunk Ssb and certainly no witch doctors.

Many stations discovered several mid-nite 20 meter openings throughout the contest; imagine what it will be like when we leave the bottom of the sunspot cycle (and enter cycle 25). 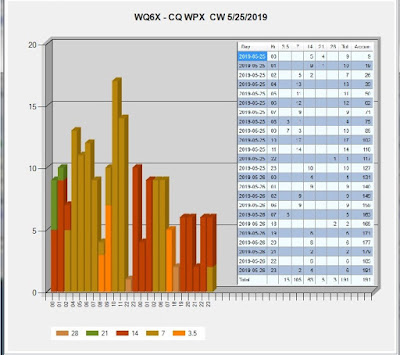 On the WQ6X end of things I found time to put 191 QSOs into the log.

Other than a Win-7
"Blue Screen" mid-Saturday afternoon,
no system problems
were encountered, and, for the 1st time no stray RFI floating around the shack and invading the Toshiba Dynadock hub device.


It was discovered that the 3-element 10 meter "Long John" yagi tuned nicely on 15 meters.
All 15-m QSOs were made using this antenna.  I was also quite surprised to work EU on 20 & 40 meters using the infamous WQ6X Lazy 8JK Sloper.  Grounding the MFJ 949-E tuner directly to the FT-1000mp eliminated stray RF in the shack, for the first time EVER. 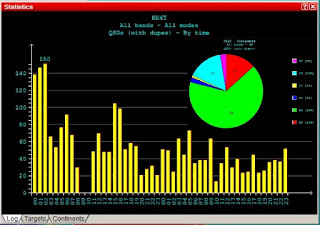 On Sunday I put in a couple of hours remote with NX6T before continuing
to run as WQ6X.

Having a relatively large number of operators available to us made quite a difference to the NX6T score and gave me the opportunity to play around as WQ6X.

LooKing at the NX6T stats, it's amazing to notice that for the most part, # of QSOs/hour were largely on a steady decline as the contest progressed.

Based on the 3830 Scores website, it would seem that we took 2nd place for the Left Coast to the NK7U super station - I didn't even know they were on the air.

Did YOU work the WPX Cw contest?