If you've been following the WQ6X contest BLOG you are probably aware that I enjoy the many "flavors" of radio sport operations; including (but not limited to) Cw, RTTY, Ssb, low power, high power, DX contests, state/area QSO Parties, Sweepstakes and multi-OP events, including Field Day and various special events such as the SEQP and International Lighthouse GiG.

The first contest weekend of May offers up a variety of 5 radiosport events; 4 state QSO parties and the Italian ARI Dx contest.  In preparation for the 2019 Cinco-de-Contest weekend, I decided to review past involvement in these contest GiGs.  Documented in the WQ6X Contest BLOG are the following CQ de Contests:
I first found about the May GiGs back in 2010, when as a newcomer to Team NX6T Dennis (N6KI) suggested that we tackle all 5 GiGs, somehow  integrating all the QSO party logs into one operation.

Because the ARI contest is first on the list for the weekend, we turned the yagi to 30-degrees hoping for a good Italian turnout.  Had we correctly read the rules, we would have realized that in the ARI contest, anyone can work anyone, altho Italian stations are worth more points per contact.  After turning away 50+ non-Italian stations we reread the rules realizing our mistake: we futilely attempted to woo lost QSOs into the log. 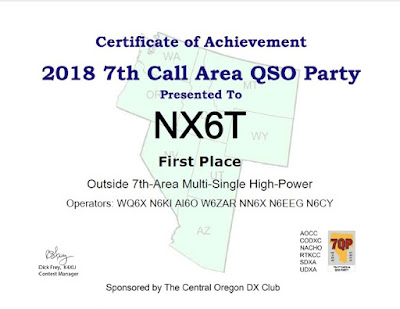 Over the years, practice makes perfect as demonstrated by NX6T's 2018 1st-place 7QP win.
I was a part of that mult-OP operation, interlaced with a WQ6X operation from W7AYT. 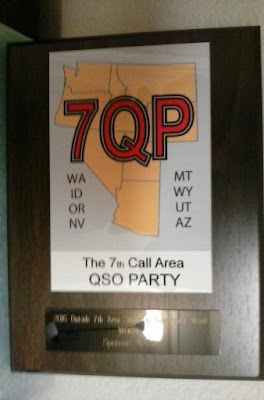 Over the years, WQ6X made forays to Fallbrook, joining the various OPs who also like to play in State QSO Parties.  Those operations resulted in a number of NEQP Multi-OP 1st-place plaques.

In 2016, running the FT-1000mp from W7AYT's QTH into an early incarnation of the WQ6X Lazy 8JK Sloper, stupendously, WQ6X walked away with the 7QP 1st-Place Single-OP plaque. I was just "screwing around", but evidently was on the right frequencies at the right time, making it all work.

Rereading the above referenced BLOG entries is giving me a number of operating improvements allowing WQ6X to run another Dual-OP GiG, similar to 2018.

As we often say in my Alameda Tongue Twisters Toastmaster's club, "We're not Perfect - we're always getting better"


The way to better ourselves in Radiosport is to revisit our previous operations and study the soapbox comments of contest competitors.  Remember: "He/She who does not learn from the past is doomed to repeat it".  What about YOU?  Do you review Your previous contest operations?
What do You learn from YOUR past?
Posted by WQ6X at 11:59 PM