The 1st weekend of every April brings about a plethora of contests worthy of playing around.  In years past I have found time for radiosport on this 1st weekend.  To read about it click [HERE] and [HERE].
For April 2019 the weekend offered up 4 HF radiosport events:
There was also the Florida State Parks on the Air (FSPOTA) GiG but was just one more event to keep track of so I decided to give that one a go next year.  [CLICK HERE] to learn more about event.

Evidently, there as been a controversial rule change for the 2019 SP-DX  event that has caused many operators to boycott that contest.  While dozens of SP-station spots were seen in the N1MM+ bandmap, none of those stations could hear me, making this a non-event anyway.  With this
GiG out of the way that left the two QSO parties and the EA RTTY up for consideration.

The Elecraft K3/0 remote equipment and the contest logs were setup on Friday evening passing all the verification tests.  Being that the first events (the QSO parties) didn't begin until 14:00z (7am PDT) allowed me to sleep in until well after 8am. 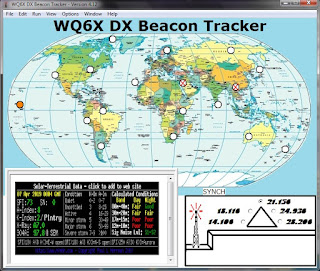 MOQP & MSQP opened the remote operation as NX6T.   Band conditions seemed promising, yet  pointing the Stepp-IR yagi 70-degrees  yielded
few QSO party stations - by 19:20z it was time to turn up the ACOM-2000a amplifier and switch to running the EA RTTY GiG.

After an hour of Search and Pouncing it was time to find  an EA RTTY run frequency (14086.86), letting stations come to me for a change.  QRM moving in required moving up and down around
that frequency.  What amazes me is how stations can move in on my run frequency (down to the EXACT Hz.) and try to "wrestle the frequency away".  On Cw it is understandable that another
station might move in approximately around the run frequency.  However when the "invasion"
is EXACTLY on frequency, I know it was no accident. 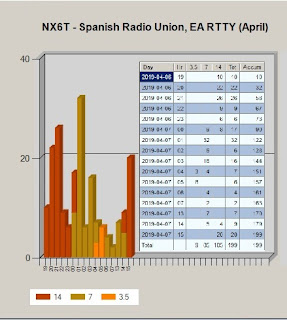 By 04:50z it was time to give 80-meters a try.  Amazingly, no stations were heard, requiring the adoption of a run frequency (3585.85).
I guess most stations did not see the internet spots; only 9 QSOs ended up in the 80-meter section of the log.  At 07:30z running out of stations to work it was time for some sleep. 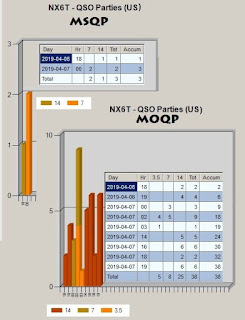 At 16:00z the EA RTTY contest was over, leaving
one more shot at the MOQP.  After a short Kona coffee break a switch to Cw put 14 more MOQP QSOs into the log.

Being rover stations, K0I & K0R gave out multiple QSOs per contact by straddling one or more county lines.  I wish more MOQP stations did that.

Surprisingly no QSO party callers were heard
on 15 & 10 meters.  Was I listening to the wrong frequencies at the wrong time, or, was there in
fact no MOQP or MSQP activity on the high bands?

It is a shame that the MSQP did not reprise on Sunday, the way MOQP does.  If band condx are poor on Saturday, we have another opportunity on Sunday.  Ending MSQP at 02:00z cheats left-coast stations out of 80/40 meter activity - Bummer Dewd.