The WPX contest is frequently called the Weird Prefix contest for a good reason; this year for MANY good reasons.  In past WPX Ssb events we have used the WQ6X callsign when I was physically onsite at the Fallbrook.  Because I also wanted to run separately from W7AYT's Concord QTH,
when I heard that my callsign was chosen to be used from Fallbrook, I made a reciprocal
agreement with N6KI to run as NX6T from W7AYT's S.F. East Bay location

To make remote operations run smoothly, I brought the Elecraft K3/0 equipment and set it up along with the FT-1000mp I normally use in Concord.  Using a direct connect Ethernet cable allowed for
the fastest data transfer possible during remote radio running.

Thanks to a series of cables for splitting the audio, it was possible to "mix" the audio from the K3/0 and the 1000mp into the Heil PROset headphones via a pair of Autek QF-1A filters; one for each ear.  At the very least, it allowed using the FT-1000mp to monitor the WQ6X signals originating from Fallbrook as my audio from the K3/0 was being sent over the internet to STN-1.

While K3/0 WQ6X remote operation worked flawlessly from the beginning, the FT-1000mp's RigExpert CAT connection was not happening.  N1MM+ could send CW flawlessly with the radio,
yet was unable to control the rest of the radio's operation.  This left me with no option but to either S&P (typing each frequency manually before logging the contact), or pick a frequency and run it, despite not having a great signal. 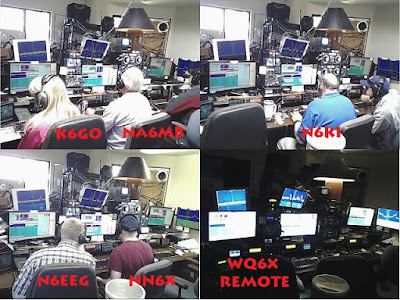 In recent contests we've had a shortage of CW operators.  For this Ssb GiG we ended up with a dozen operators; most operators actually making the drive up the hill to NX6T's (900' above sea-level) QTH.  This allowed me the opportunity to set things up in time for my running the dinner shift @03:00z (8-10:30 pm) after 1st putting a bunch of QSOs in the NX6T log.

Due to an abundance of operators, we had virtually all shifts covered running as a Multi-OP 2-transmitter entry.  Some people are morning operators (like K6GO & NA6MB) others are
afternoon operators (such as N6EEG & NN6X), evening operators like N6KI or after midnight
OPs (WQ6X & N6ERD). 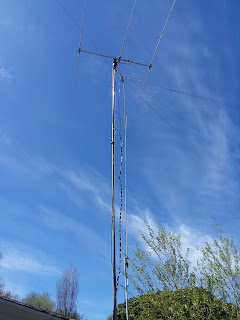 Meanwhile, back at W7AYT's QTH it was time to once again tweak the WQ6X Lazy 8JK Sloper, giving 450-ohm ladder line access, as well as coaxial access to one of the sloper lines.

The good news is that this configuration seems to have eliminated the stray RF in the shack (which previously would cripple the RigExpert interface).  Unfortunately, for this contest weekend, it was the CHA-250 vertical which made all the contacts; the
8JK Sloper ended up being just a receive antenna.

10-meters never experienced any activity, not even with the 3-el 10-meter yagi pointed towards South America.  I can't wait for the sunspot cycle SFI to move solidly into the 75+ range.  Until then, the
yagi just sits there looking good.


Typical of most evening-style radiosport events (especially on 40-meters) intentional QRM always seems to be an issue.  For this Ssb contest, RTTY QRM was rampant throughout the phone band (below 7.200).  This same RTTY QRM plagued us during last month's ARRL Dx Ssb contest.
([CLICK HERE] to read about that.)  At first I wanted to believe the QRM was random, until
it became clear that every time I changed frequency the QRM followed me.

Overall, our WQ6X operation for the 2019 WPX contest was quite a success, amassing over
3.88 million in contest points.  Were it not for the concentrated effort at WC6H we would have taken 1st-place for the left coast in the Multi-2 category; alto 2nd-place was still a surprise.  It would seem that WQ6X took 3rd-place  for USA and 4th-place for North America.