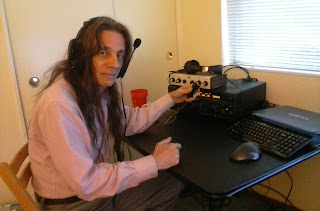 For radiosport contest aficionados, the 1st weekend in May brings us 4 state QSO parties
(7QP, INQP, DEQP & NEQP) along with the Italian ARI DX contest.

My first exposure to this weekend was 5 years ago with N6KI operating NX6T in Fallbrook,
attempting to log all the contests by way of one logging program.
Since then NX6T has managed to win a couple of plaques for the NEQP and a 2nd place in the 7QP.

For 2016 I was not up to a long drive to Fallbrook and running remote would not have worked in
a multi-mode Multi-single operation with 5 operators.  Instead, I chose to setup my FT-1000mp at W7AYT's QTH in Concord (California), giving his recently installed Comet CH-250 vertical
a thorough test.

All the contests allowed multi-mode operation and a couple of the QSO parties plus the ARI contest also allow the use of RTTY which I considered for extra fun until I realized that my West Mountain Plug-N-Play interface was cabled for the ICOM 7000, not the (more recently acquired) FT-1000mp.
Until I work out the 1000mp cabling for RTTY, the Plug-N-Play is simply relegated to CW keying;
which it does extremely well.  As it turns out there was virtually no contest RTTY activity.
Then again, if I had been calling CQ on RTTY, I might well have paved the way for legitimate activity.

Each contest this weekend had a different length
and a unique starting time:

Rather than use a single N1MM log, I made logs for
each contest switching to the proper log for each group
of contacts.

After 4 hours sleep I fired up the coffee pot and the
FT-1000mp for a 12:30z start.  Because in years past (operating from NX6T) I experienced LoTs of ARI contest activity, I was expecting the same for 2016 - WRONG!  NX6T's ACOM 2000 amps into 70' high yagi's and the Fallbrook location make all the difference;
literally in the world.

Evidently, 100 watts into a vertical from the SF east bay is not enough to play like the big boys and girls in the ARI contest.  Fortunately, this fate did not apply to the state QSO parties.  By the end of the ARI contest Sunday morning I had amassed a whopping 4 QSOs.  Other than the 2 European stations worked, I heard no one else calling CQ.

Throughout Saturday day and evening I would periodically put out a CQ ARI Test call on CW,
with no callers other than a couple of frustrated 7QP stations who didn't understand why I was sending a serial # and not my state.  If they had ACTUALLY LISTENED to my CQ call they would have KNOWN  I wasn't playing 7QP at THAT moment in time.  They SHOULD have been calling
CQ 7QP for me to work them in their own contest! - Oh WELL!

Within minutes after 13:00z, 40 & 20 meters came alive with 7QP calls.  For 7QP-2016 I was pleasantly surprised at how many stations were operating on county lines and in one operation
a county from each of two states - how cool is that?!

Multi-contest weekends often have interesting quirks.Notable this year
was WJ9B calling CQ IDQP (not INQP).  When I called him I got no reply.
His contest exchange said he was in IDAHO, so he should have been calling CQ 7QP.  Eventually he figured it out - when I finally worked him he was calling CQ for 7QP.

As it turns out, for 7QP my score took 1st place for low power mixed mode.

With DEQP & NEQP on hold until Sunday morning, all that was left was the ARI contest.  Calling CQ for over an hour on 80 & 40 meters produced no results so I called it quits at 09:00z for 7 hours sleep.

By Sunday morning the K-Index had risen to 5 (and eventually 6) which all but nullified any upper band activity.
I managed one more NEQP QSO before calling it quits at 21:00z and taking down the radio.


Poor space weather probably had a lot to do with sparse contest activity;
such is the unknown variable in every contest weekend.

DiD YOU play in this last weekend's contests?


This certificate was received on June 10th 2016 - these guys are QUICK! 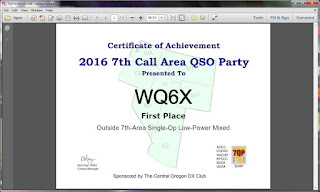 1st place outside of the 7th call area
is QUITE an honor when you consider what I had to work with.

The last weekend of July brought this plaque to my mailbox.  Who woulda thunk? 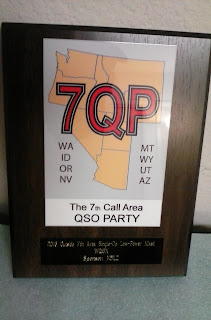