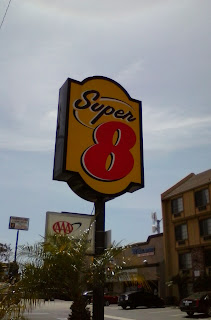 The end of April found me in Westminster (Orange county, S. California) on business.  For the first Saturday I drove in from the Bakersfield area.  My thinking was to get situated at the Super 8 and initiate multi-band activity in the SP-DX RTTY contest, operating remotely using STN#1 @ NX6T in Fallbrook (aka "NashVille").  As it turns out I accomplished about 1/2 that.

At NX6T, renovations to STN#2 limited multi-band opportunities for me, requiring that I pick one band and stick with it.  Because the contest period was 12:00z Saturday to 12:00z Sunday, I realized that nearly half of the contest period was behind me.  Based on propagation predictions I decided that 40 meters would be the best all around band, allowing me to work stations right up to the contest end. 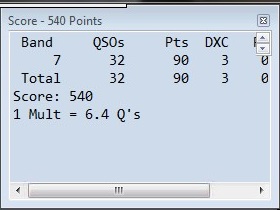 Most DX contests allow single-band submissions; all but this one.  By contest end my log was lumped in with all the SOAB LP stations, so the only thing I won was a self-pat on the back.  Instead, I used operation in the SP-DX contest to learn new operating techniques with N1MM (for me the preferred RTTY contest logging program).

While N1MM was auto-CQ'ing I spent the listening time writing the JIDX blog entry and at one point even playing in a poker tournament online.  Result?  I just missed the final table in the tournament and managed a whopping 2 QSOs in 2.5 hours.

Then I got a brilliant idea: I turned the 2 element 40 meter yagi towards Japan calling CQ contest
to enjoy the usually expected dozens of JA QSOs.  The result?  0 QSOs.
I guess JA's don't play in SP-DX RTTY contests.
Bummer Dewd!

There was virtually none of the usual 40-meter intentional contest QRM even tho RTTY stations ran as low as 7.035.  Amazingly, a number of CW stations were able to co-exist; many intermingled between a dozen RTTY stations.  I was amused to hear a CW station calling CQ on a nearby frequency while I called CQ SP-DX on RTTY.

Over the period of an hour the CW station enjoyed several ragchews, seemingly oblivious to my RTTY operations next door to him.  Because this area of 40 meters is also used for SSB operations in regions 1 & 3, it is proof that we CAN share areas of the RF spectrum effectively.


Equipment-wise I ran an Elecraft K3 barefoot at 62 watts as I was unable to turn on the KPA-500 remotely.  I worked every station I could hear, so running low power was not an issue.


In fact, I was surprised when I received a call from ZS6WB (South Africa).  At first the ZS6 prefix looked so much like just a jumble of characters that I ignored it.


When the same "jumble of characters" showed up again I took a chance by pasting the ZS6 callsign into the callsign window and pressing the INS key to initiate a QSO.  Receiving a correct reply I logged the QSO for my only non North American QSO during this contest.

While I was severely limited in what I could do remotely, it WAS a lot of fun working the SP-DX RTTY contest to the degree that I did.  After all, amateur radio contesting is about being prepared for
just about anything which comes our way during the contest period.
For the SP-DX contest I certainly got to make that happen.

What about you?  Did You play in the SP-DX RTTY contest?
How manny RTTY exchanges ended up in YOUR Log?