WQ6X Sprints through another All Asian Weekend Affair

In a recent "Blast from the Past" BLOG entry on the All Asian contest, I described a typical All Asian weekend.  Because of it's calendar date, this year's A-A coincided with the [for me non-existent] NEQP event, followed by the 4 hour Cw Sprint contest.

This year's A-A Ssb GiG was a SUPER disappointment; especially compared to years past when,
no matter how bad we were, NX6T still managed some sort of a 1st-place.  While that is less likely
to happen this year, on both sides of the operation (NX6T and WQ6X), All Asian "downtime"
(of which there was LoTs) was filled in by other useful activities.

The contest opened Friday afternoon/evening with a WEAK 20-meter opening.  We could hear numerous BG/BY stations calling CQ, as could stations all over the Northwest.  Unfortunately,
they could not hear us back.  9V1YC was LOUD and CLEAR but could not hear us until later
on 40-meters.

At NX6T, on Saturday afternoon there were a number of visitors to NX6T's hilltop QTH in Fallbrook;
in particular, 14 yr-old KN6DLG being groomed by N6KI (see the opening PIC) to join up with the NX6T contest crew. 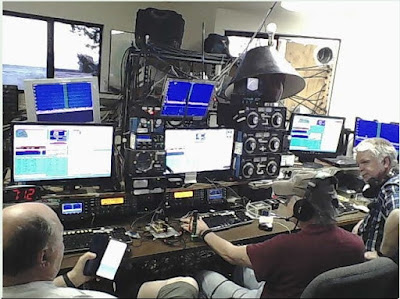 Later in the afternoon, NN6X and N6EEG made their usual trip to NX6T looking for some action; unfortunately, as you can see from the hourly stats, there was not much to be had.  Eventually the shack was shutdown (for B-I-C action) and N6KI ran the rest of the evening remotely from home
and I ran the 3am to 6am shift remotely from Concord.

Unfortunately, because of an internet audio problem, I could not run frequencies, only S & P.
We missed a LoT of QSOs from that as all too many Asian stations are either afraid or do not understand how, to run a frequency and call CQ.  Correct me if I'm wrong, but if you are hosting
a QSO party or Dx contest, it should be YOU and YOUR OPERATORS who do 90% of the CQ'ing;
relying on statesiders to pick up the slack should be the BACKUP PLAN, not S-O-P (Standard Operating Procedure).

Unfortunately, business commitments delayed my trip to W7AYT's QTH.
By the time I had equipment properly setup and the antennas checked out, it was already past 5pm (00:00z), leaving less than 1 hour in the NEQP, along with POOR signal levels for the SPRINT GiG.

Not hearing any signals from Nebraska (just like Sweepstakes), I deleted the log setup in N1MM+
and focused on the Sprint.  Calling CQ rarely yielded any callers until the last hour, altho stations came right back to me when I called them. 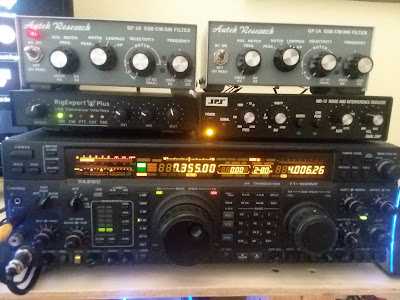 Then again, altho I ran the FT-1000mp into the WQ6X Lazy 8jK sloper and CH-250 vertical,
overall I must've been rather weak as I was constantly being asked to repeat EVERYTHING. 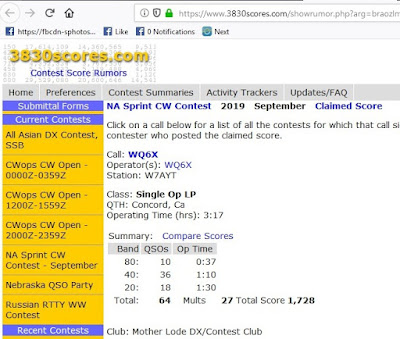 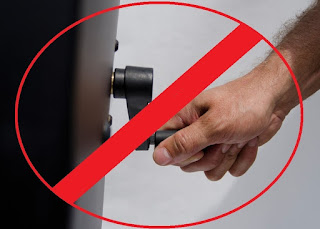 Now, you've heard me BITCH about 40 meter intentional QRM; especially in Ssb contests.
Well, this weekend there was good news and bad news:

During my last couple of listening hours", at least I managed to add a handful of mults to the 40-meter log.  In the final couple of hours of the contest N6KI added a few 20-meter multipliers.  While QSOs are great, with a score as puny as ours, Mults are where it's at.
I was so desperate to decipher the propagation to Asia that I took a listen for the Russian beacons
on 7.039 (only the "M" beacon in Magadan was heard) and the broadcast stations above 3.900
and 7.200 to determine propagation patterns.
([CLICK HERE] to read my write up on the 40-meter Russian military beacons.)
I am convinced that the bands WERE open; there was simply a LACK of participating Asian stations.  In fact, at one point there were more DU/DZ/DX and YB/YC stations (all in Oceania) than there were Asian stations.  HuH? 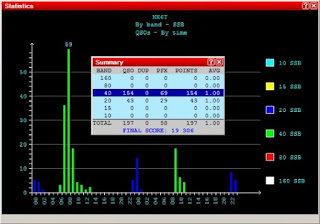