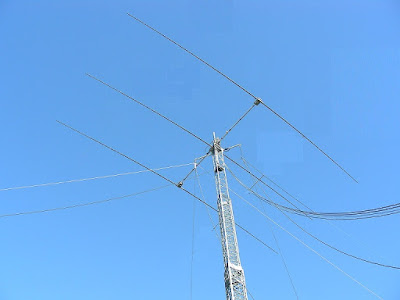 This BLOG entry is not meant to be an outright PLUG for the Stepp-IR antenna concept; rather,
this a description of how utilizing the correct configuration at correct time can up your radiosport
score by 12% - it just so happens that I was using a 3-element Stepp-IR at the time I was doing it.

The last full weekend in August brings several radiosport activities to the shared frequency spectrum.  Similar to last year, I took the opportunity to run 6 contest events; 5 as NX6T and one (HQP) as WQ6X.  Overall, there were an additional handful of contest events during the 4th weekend of
August, including:
Circumstances (no stations heard) did not allow participation in the W/VE GiG.  Where were the players in that GiG?  I would have thoroughly enjoyed working W/VE islands, if ONLY they had
been active. 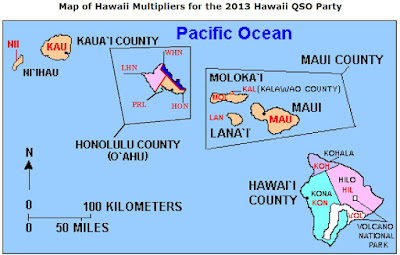 ﻿
As for HQP it is always a letdown.  One of my bitches about other QSO parties is that they are
too SHORT; so short that there is no opportunity to work QP stations on 80 & 160 meters.
KQP on the other hand is a generously wondrous 48 hours.

Unfortunately less than a dozen unique KH6/KH7/WH6/NH7 stations actually made it to the receiver in Fallbrook; which brings me to my 2nd QSO party bitch: not enough in-state stations play in their own QSO party; there seem to be 10x more county-seeking vultures than there are in-state stations
to satisfy that "hunger".

This year I was so desperate for Zone 31 QSOs that NX6T called CQ HQP (and of course was immediately called by a W4 station).  I eventually set up an N1MM function key to send "KH6 Only"; instead, I should've signed as WQ6X/CA.

In multi-contest weekends like this one, proper planning is essential.  Each radiosport event has
a specific start/ending time; while events may start @ the same time, being different events their ending times are quite different.  By 14:00z all of the contest events WERE in some way active.

﻿
HQP is like a mini-DX contest @5pm (local time) on Friday and ending @5pm (local time on Sunday.  Ideally, this gives us twice access to each radio band (assuming the band is open and operates are "playing" on each band).  Typical of most state QSO parties (except CQP) the in-state turnout for HQP, KQP and OHQP was quite a disappointment.  What is the point of hosting a QSO party without [some sort] of activity representation for EACH county?  The CQP.Org website is a PERFECT example of how to "sign-up" for all the state counties (58 in California) well before the contest event.

Friday evening was easy; if the callsign didn't contain a KH6/KH7, WH6/WH7 or NH6/NH7 then I simply ignored it.  Due to a shortage of active Hawaiian stations, out of desperation I began to call
CQ HQP.  Unfortunately, (except for WH6R) the only callers were the usual Southeast stations that don't have a clue (and therefore) should not call me.  Just as I said in a recent Blog ([CLICK HERE]), if you don't know what KQP is or if you don't know that NX6X/WQ6X is in California (and not in Hawaii), then YOU SHOULD NOT CALL ME.  I guess to make it easier I should've signed as WQ6X/CA.

To maximize contest operation amongst all the different events, I took the opportunity to learn the art of StePP-in' it, allowing effective overlapping operation in each of the 3 QSO parties, while looking for Europe in the YO Dx Cw contest, along with the SCC RTTY GiG from Slovenia.

When there was propagation to Hawaii, I would click the 180-degree setting on the StePP-IR antenna.  If HQP and OHQP/KSQP were producing signals, running the antenna in BI-Directional mode allowed working "both ends" without having to rotate the antenna.  When Hawaii faded out, switching the antenna to "Normal" (Northeast) brought the minutely-weak signals into the I-F passband, while the Autek QF-1a audio peak setting boosted those signals above the noise.

In order to run 3 interleaved QSO parties (as NX6T & WQ6X), a separate log file was created for each.  I purposely ran these GiGs as an assisted operation.  In the Kansas QSO party GiG, rover stations were switching counties on a regular basis; an updated band map made all the difference
in sorting the different stations out.

Because my original ideas was to run dual-OP from Concord, I purposely used the NX6T call.
For various reasons I never made it to W7AYT's QTH in Concord.  Instead, on Sunday, having worked most QSO party stations, I created separate HQP and KQP logs to run as WQ6X in those events.  Occasionally a new Kansas county would activate.  A quick switch-and-back to the NX6T
log quickly snagged those new multipliers (for both callsigns). 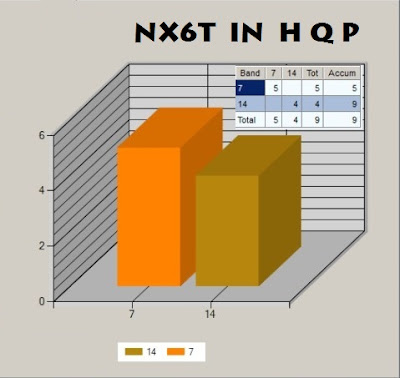 By mid Sunday afternoon, only the HQP contest was left; by 04:00z it was over, leaving me with no new Hawaiian QSOs in the log.  Once again, my beef of not enough QSO party participation is levied - this time, "across the pond".  If hams don't play in their own QSO party, then what's the point of having it?

Did YOU play in the various contests ending August?

How did YOUR efforts turn out?