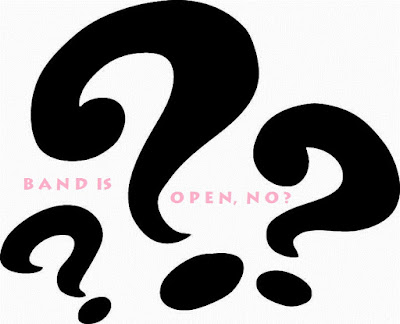 Awhile back (late-May) I wrote a Contest BLOG Entry on the Topic of band openings
([CLICK HERE] to Read it.).  However during recent radiosport weeks (and esp. the All Asian
Contest this last weekend), it occurred to me that all too many contesters are often fooled by
a lack of understanding what [it is that] constitutes a band opening.

To begin with, in radiosport (and to some degree during ragchewing), it is important to understand
in general what radio bands are open @ what time of day, and to WHERE geographically.
Sometimes the only problem is that we are "pointing" the antenna in the wrong compass
direction for that time of day, to that area of the globe.  Remember: at nearly any time,
the plasma energy of a solar event can blanket the upper atmosphere and Change
EVERYTHING!

﻿
One of the "excuses" for a low turnout during a radio contest - like this last weekend's All Asian GiG - is Space WX.  The REAL reason the bands seemed too Quiet this weekend was CLEARLY due to the lack of Asian stations Calling CQ in their own contest event.  Notice that in May we MIGHT be able to blame poor WPX performance on a low SFI (67) or an A-Index of 10+, while Sept. finds us with and SFI of 73 and an A-Index of only 8. 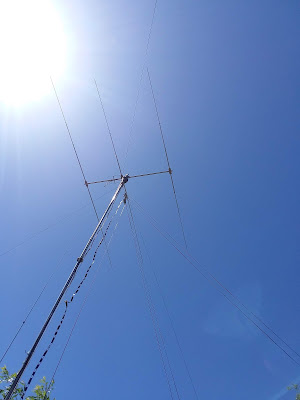 Because we are in the TRENCH of Sunspot Cycle 24, 10 & 15 meters often SEEM dead.  In fact, it may well be that everyone is listening and no one is transmitting.  When I make a 10/15 call these daze,
I am often rewarded with a single caller
who ALSO "Knew" the band was open.

Here in the SF Bay area (even during cycle 24's trench period), I am never surprised when I point the 10-m Long John to Azimuth-120, call CQ and receive calls
from a PY7 or PX4.

Admittedly, having a rotatable yagi makes
a difference.  In a recent contest, I manual-tuned the 10-m Long John to resonate on 15-meters.  On 15, the antenna is more like a Buddipole (I.e., no-Gain); at LEAST it was rotatable.  Sweeping the yagi like a radar, 2 stations (Colorado & Indiana) were worked that could NoT be heard on the 8JK sloper - ingenuity Rocks!


If the bands are TRULY DEAD, one of the reasons may have to do with "Poor" Space-WX.  If the A-Index is 62 and/or the K-Index is 5, of course band openings may be tricky; this is the time to use your creativity, NoT Quit.  It is at times like this when those "secret openings" are found, like the Springtime 05:30z (10:30pm) "pipeline" from the SF Bay area to Colorado, on 10-meters, no less! 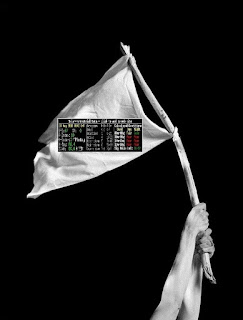 A major reason to identify Space-Wx for what it is,
allows us the choice to do something else rather than futilely wrack our brains out over something we can't control and therefore cannot improve.

Then again, if your goal is simply to ragchew on 75 meters in the evening, it's going to take a rather nasty solar event to penetrate the 75-meter rag-o-sphere deep enough to ruin your Ssb QSOs.

This last weekend, while Dx contesters were moaning about bad band conditions, that was for Dx contacts with Asian stations.  It seemed the "Bootleg" Hispanic and Indonesian stations (on 80 & 40) were enjoying THEIR ragchews no problem; altho their signals
in the middle of our Asian contest - BiG problem! 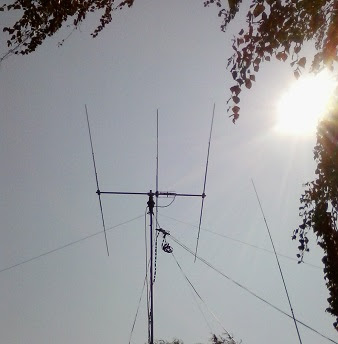 During this last weekend, the 8JK Sloper produced considerably LOUDER ham band signals, while the CH-250 vertical brought in Radio New Zealand (RNZ) on 5.940 w/5-9+20db signals, whereas tuning the 8JK sloper could only get an S-6 signal.  I guess the sloper REALLY DOES have a significant F/B ratio (RNZ is off the back of the N-E sloped Sloper). 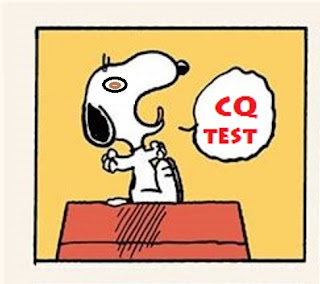 More than we realize, the MAIN reason bands seem dead during a radiosport contest is because no one (in the target area) has the courage or the wherewithal to call "CQ Contest".  In this year's All Asian Ssb GiG, I was amazed at how FEW Asian stations were actually calling CQ; WE had to DoiT for them, when it is their responsibility (being the host of the contest) to make their presence heard, encouraging US to call them, not the other way around.

In June I even wrote a BLOG Entry on WHY we should Call CQ.
[CLICK HERE] to read all about that.

How have band conditions been for YOU during this sunspot trench?

What steps do YOU take to make it all work for you anyway?
Posted by WQ6X at 9:24 PM