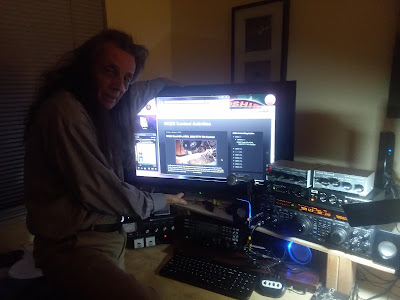 Depending on your point of view (RTTY or otherwise), the January NAQP Cw contest is the 1st W/VE radiosport GiG of the new year.  This year, a Toastmasters training conference @ Diablo Valley College (near W7AYT's QTH) found me in the area but unavailable for on-the-air action until 00:00z.

At 01:00z a message from Dennis reported that operator-wise we were down to just him and myself.  By the time I remoted in, 20 meters had also gone long in San Diego, encouraging me to 80 meters.  Setting up on 3509.09 I began running a frequency.  A text from N6KI informed me that the in-shack 2nd harmonic was CLOBBERING him on 7.023 so a move was made to 3535.75 and I never looked back. 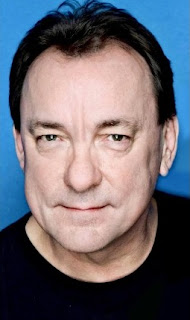 One of the cool things about the NAQP GiGs is that because we send our Name / QTH, some operations get real creative with the Name part of the exchange.  At NX6T, because we sometimes have a multi-gender crew, we use the name PAT (Papa - Alpha - Tango). 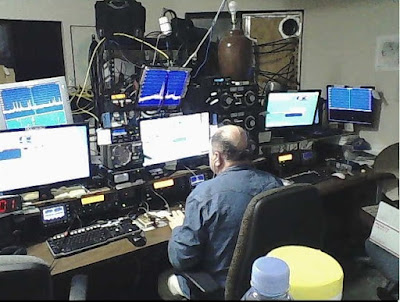 Around the usual dinner hour (7pm) N6KI took off for dinner, relieved remotely by John K6AM, who kept the insanity going on 40-meters while I "pleaded" for QSOs on 80 meters.  At 04:45, I was about to send Dennis a text recommending someone take a listen on 160 when I begin to see 160 meter QSOs in the log.  Before the evening was over 66 160-meter QSOs made it to the log. 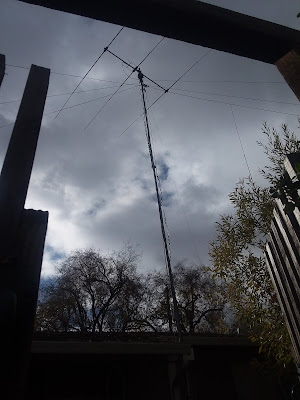 As I continued to run 80 meters, I found
an opportunity to listen to my signal on the ICOM 7000 @W7AYT, switching between the WQ6X Lazy 8JK Inverted Vee and a CHA-250 Vertical.

Oddly enough, that Comet vertical was often more low-noise than the inverted Vee.  Being a lower-angle antenna, the CHA-250 vertical often hears signals not discernible on the 8JK-Vee.

Then again the 8JK Inverted Vee is more highly directional to the N/E as well as Hawaii for other kinds of QSOs.

I have often joked that the 3-el Hy-gain
10-meter "Long John" acts a perfect capacity hat for the 8JK on 80 & 160.
A measurement of the 8JK VEE's end-termination resistors determined that the 100-ohm resistor packs (three 2-watt 300-ohm resistors in parallel) had "drifted;

one pack now @155-ohms and another pack @75-ohms - HuH?  For my next trip to W7AYT it's time to make new resistor packs.  It is the termination resistors that lower the 8JK antenna's radiation angle, altho evidently not as low as the CHA-250 vertical. 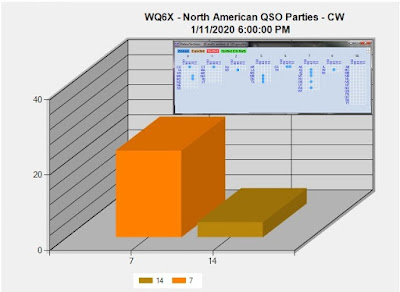 While I only managed to put 27 QSOs in the WQ6X Log from the SF East Bay section, I was OK with that - the 5 hours I spent on 80 meters for NX6T put 226 QSOs in that Log.  For WQ6X I just wanted 3830 Score credit for the brief operation as a solo-OP. 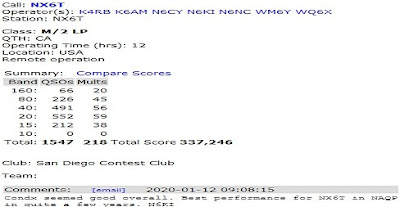 By the time it was all over, it would seem that NX6T took 5th place overall and 2nd place for California; not bad when you consider that 80/160 were run with a pair of "droopy" inverted Vees.

Did YOU work the North American QSO Party?