While I long for the days of an SFI = 185 solar flux, being at the other end of solar cycle we can hopefully console ourselves that 160-meter condx. are all that they can be; the "truth" is somewhere in the middle.

Considering that the last 1/2-dozen contest weekends have been loaded with crappy Space-WX, this weekend was AMAZINGLY Quiet.

This year's ARRL-160 contest began at 23:00z on Friday; 3pm California time.  Being a typical 30-hour ARRL contest,
it ended at 16:00z (9am California time)
on Sunday.  Initially, Dennis (N6KI) could find no other available operators for a Multi-Single setup except WQ6X and
Axel KI6RRN.


Late Saturday afternoon a visit from DF8DX brought B-I-C (Butt-in-Chair) action to the NX6T shack.  Bodo ran STN-2 during the 7:00 to 10:30 "dinner hour"; I usually run STN-1 remotely during that time-period.  Thanks to DF8DX, I was confident that NX6T was in capable hands, giving me the freedom to put 22 QSOs in the WQ6X ARRL-160 Log. 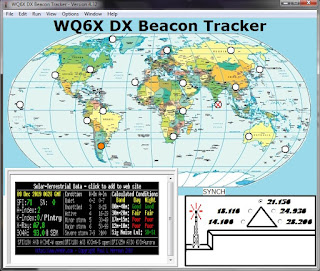 N6KI and WQ6X ran NX6T remotely Friday evening; Ron running STN-1 via RCForb and Dennis running STN-2 via an Elecraft K3/0.  KI6RRN also put some QSOs in the log, but we never crossed paths so I dunno when he was actually on the air.  Space WX-wise, 160-meters was incredibly quiet; both in Fallbrook (SDG section) and Concord (EB section).  Unfortunately signal levels were often weaker than usual.  Then again, one of the weak-signal surprises was from IK0XBX; not bad from San Diego using only an Inverted Vee.

While we got a late start (03:45z), N6KI quickly made over 160 QSOs in just under 2 hours.  It's a nice feeling to start an operating session knowing that team members have been keeping the NX6T call in bandmaps all over North America, as well as around the world.  Continuing to run on 1805.71 found me keeping alive a busy frequency, interspersed with "popping" multipliers from the bandmap.
Amazingly, by contest-end we managed to work all sections except NT.


At 07:25z a W4 in TN out of nowhere began calling CQ on my run frequency.  Ignoring him (NX6T was louder) I continued making QSOs and calling CQ.  After one of my CQ's the W4 station moved right ON TOP of me and sent "L-i-D" several times and moved down frequency just enough that the stereo Cw put his high-pitched signal in my right ear while I worked stations heard in the left ear.
A move to 1806.06 put his puny (but annoying) signal out of the passband; not working anybody
he eventually disappeared.

For this weekend I accomplished what I set out to do; run NX6T remotely from Concord via my Elecraft K3/0 and test-run the recently devised WQ6X Lazy 8JK Inverted Vee (converted from the original Lazy 8JK Sloper).  As a Lazy 8JK Sloper, on 160-meters the antenna could barely work N6RO (5-mi away); as a Lazy 8JK Inverted Vee, the WQ6X signal was able to work nearly
all of the Northwest states and as far as Colorado.  As a sloper, the 8JK was a noisier antenna
than the CH-250 Vertical next to it; as an Inverted Vee it is now much quieter than the vertical. 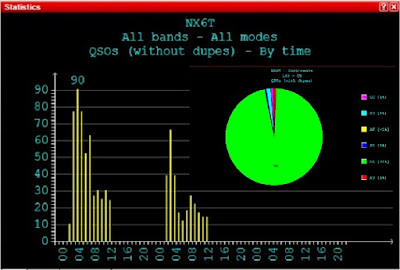 You have heard me say ALWAYS submit a log because no matter how small your score is.  If no one else in your section/division/power-class submits a valid logfile then you win by default.  For this year, listening to the other W6 stations during the ARRL 160 contest, it would seem that NX6T may well be the front runner; not only for San Diego Section, W6  & IARU Zone 6, but for Southwestern Division as well - Just barely slipping by the Arizona Outlaws (AOCC).

Based on scores reported (or should we say, scores NoT reported) to the 3830Scores website, it would seem that WQ6X took 2nd place for W6 and IARU Zone 6, 1st place for East Bay section
and surprisingly, 1st place for Pacific Division.

While the solar flux for this year's ARRL 160 contest was depressingly low, I need to remember that low-SFI's make for GREAT 160 contests; we'll know more after the upcoming Stew Perry 160 contest.

DiD You work the ARRL 160 Meter contest?
What band condx. did you encounter?