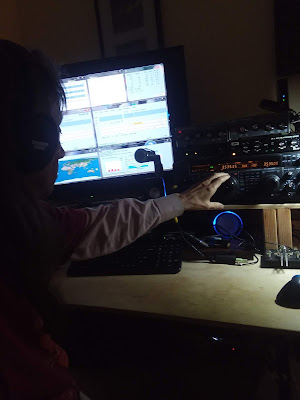 It's no secret that the November Sweepstakes is my favorite domestic contest GiG; the Cw variation in particular.  2019 marks my 17th consecutive SS operation; the 5th straight year from W7AYT's QTH in Concord.

In the pre-contest BLOG entry, I overviewed the fact that the former WQ6X Lazy 8JK was partially modified to become the WQ6X Lazy 8JK Inverted Vee.  Throughout the contest weekend the Reverse Beacon Network (RBN) stats were consulted, comparing monitored signal levels between the Lazy-V and the CHA-250 vertical.
Thus far, no reliable conclusions have
been concluded.

Originally I was scheduled as a b/u operator for NX6T's high power multi-OP event.  Being a backup operator in radiosport is not unlike having the role of relief pitcher in baseball - if you're not needed, then the time can be utilized for other endeavors.
In Fallbrook they needed more B-I-C (butt in chair) time, not remote operators, leaving WQ6X to
work the contest any hours that was needed/wanted. 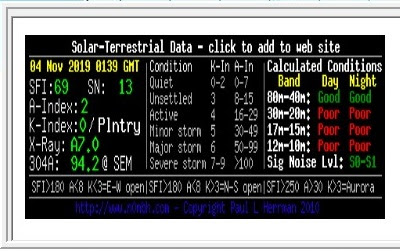 Space WX was relatively quiet the entire contest weekend; unfortunately, so were the signal levels.  Signal-fading is problem enough; coupling that with weak signal levels made this SS Cw weekend quite a challenge.

I have often complained about poor turnout in most state QSO parties (CQP excepted).
This weekend felt very much like that.  I was disappointed by the lack of obvious multipliers
making it to the East Bay QTH. 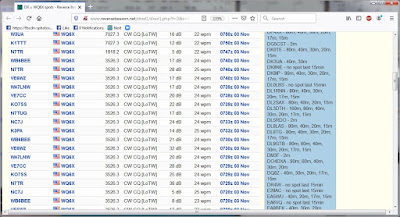 Not sure what to make of this situation, I turned to the Reverse Beacon Network (RBN) stats to figure out what the REAL problem is.  Scrolling backwards through the SNR (Signal-to-Noise) data, all of a sudden the realization came to me:


"A MAJOR reason we make fewer QSOs than we would like is NoT because our signals are NoT hearable, but because there is no one on "the other end" actually hearing those signals."

No amount of power increases or antenna changes can encourage operators to get out of bed,
fire up the coffee, turn on the radio and go tuning for my signal.  This brings us full-circle back to
the problem of lack-of-participation.

There is an old saying "you can't work'em if you can't hear'em".  What is ALSO true is:
"you can't hear'em if they ain't transmitting".  Therefore, we should stop blaming ourselves
for things we can't control. 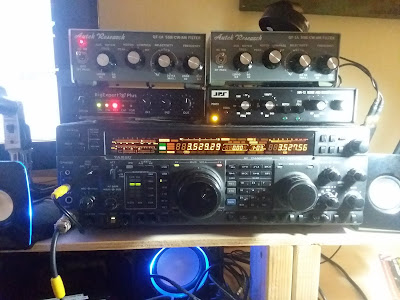 It is actually at times like this when we SHOULD be calling CQ, if for no other reason than to let the rest of the contest whirrrrl'd know that the band(s) are indeed open.  Even if stations have already worked you, hearing your CQ call may encourage them to do the same.

With a non-insignificant number of CQ Contest calls on the band, don't be surprised to discover
that many stations show up; either by happenstance or from seeing a population increase in the bandmap.  Either way, a "dead band" can become very active, simply by calling CQ. 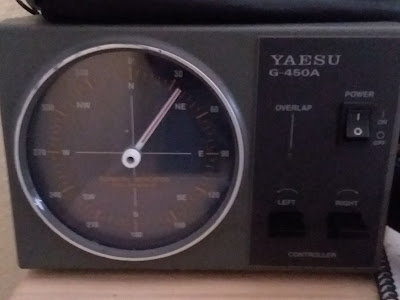 A few months ago, I wrote a BLOG entry about this very phenomenon.
I also wrote a BLOG entry explaining why we should call CQ.
For this last weekend, hoping to force a 10 meter opening I called CQ while rotating the yagi
to various directions around North America.  Often when I do this, out of nowhere a station or
two hears me and calls in.  Unfortunately, for this contest, that didn't happen. 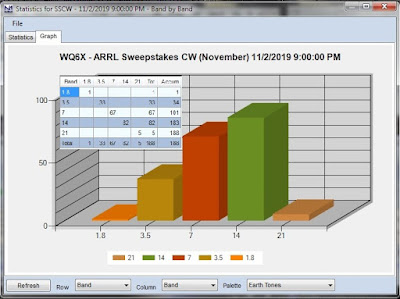 When it was all over there was a whopping 188 QSOs and 59 sections in the WQ6X Cw Sweepstakes LoG.  Looking up the reported scores on the 3830 Scores website, it would seem that WQ6X has taken 1st-place for the East Bay section; as for the Pacific Division, that remains to be seen.

DiD YOU work the 2019 November Sweepstakes?