SS-Ssb 2019: The Radiosport GiG that Faded into Obscurity

Every [November] Sweepstakes contest (and in particular Sweepstakes-phone) has some memorable aspect to it.  In the 1979 SS-Phone GiG (running as WA6LKB/8), from my Cincinnati Western Hills townhouse, I developed a minor hand infection which required me to QRT the contest and QSY to St. George's hospital for that Thanksgiving week. 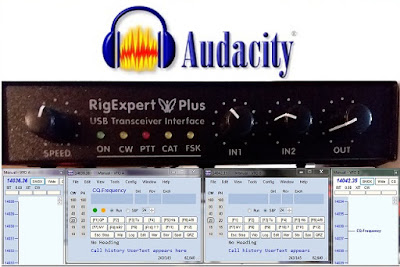 For this weekend a major goal was to test-drive the recently-updated audio cable configuration for my portable operations @W7AYT's QTH while running the Ssb contest largely by F-Keys and .Wav files.  Saturday morning, time was spent recording, and as needed, re-recording a set of .Wav files designed to largely run the contest.  Other than saying your callsign and my QSO#, everything
else comes from a .Wav file.

As you can see, each of the 12 F-Keys had a purpose; depending on whether the RX or Sub-RX
was in RUN mode or S&P Mode.  Experimentation was done to determine whether RUN'ning a frequency should be done from Main-RX (with DSP, Shift and NB) or the more wide-open Sub-RX,
for which - it turns out - there is no R-I-T control - bummer dewd.

If some Yo-Yo calls me significantly off frequency, I then have to note the OP frequency, tune him
in, make the QSO and return to the OP frequency w/o anyone "waiting in line" even noticing what just happened.  Wouldn't it be easier for the Yo-Yo to properly Zero-beat the operating frequency, saving us ALL LoTs of time?  Am I missing something? 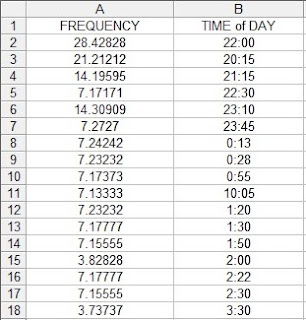 From the frequency list at left you can see that WQ6X made a LoT of unanswered CQ calls.  On 10-meters, the Long John yagi was swept back and forth from 0-degrees to 180-degress and all points in-between; all for naught.

Overall, for better-or-worse, the 2019 November Sweepstakes was largely an S&P affair.  Unfortunately, there was a DEARTH of hearable/workable "CQ Sweepstakes" callers.  Wassup with THAT?

A number of after-contest reports from "BiG GuN" stations indicate that the volume of participants decreased noticeably from 2018. 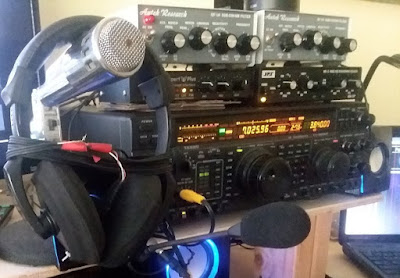 At LEAST I had a full weekend opportunity to test-run the installation @W7AYT thoroughly from an Ssb standpoint.  Not wanting to be "wired in" I wore wireless headphones and "mounted" the Heil HC-4 headset atop the station's Electro Voice EV-664 mic.  The 664 is more of a ragchew microphone; for radiosport the HC-4 has more syllable "punch".

On the receive audio end of things, the pair of Autek QF-1's and the JPS NIR-12 were largely run
at the "other end" of the hearable audio spectrum.  The Main-RX DSP-Contour control sometimes peaked a voice into intelligibility; necessary as so many of the signals this weekend were so weak. 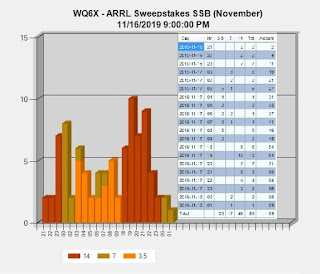 ﻿By 03:00z (7pm PST), it was all over.  10 and 15 meters never materialized.  20-meters "folded up" early both Saturday and Sunday, sending us down to 40-meters, which was not quite ready for some sustained action that early in the afternoon.  I guess it's a GooD thing that 30 meters does not allow contest activity.

A couple of annoying anomalies this weekend were the 100's of stations who said "PLEASE COPY..." before EVERY QSO.  Not only is it a waste of time, it becomes an annoying bunch of gibberish.  Make it short and succinct.  Because of the severe fading, saying "Please Copy" wasted enough
time that the signal would then fade right as the Check & Section were spoken, requiring one-or-more repeats.  Remember: every repeat DOUBLES the Qso-time.

Despite all of my bitching, I enjoyed the 2019 SS-Ssb GiG as I've enjoyed ALL the Sweepstakes events over the years.  According to the 3830 Scores website, it would seem that WQ6X took a
1st-place for East Bay (EB) section, 2nd-place for the Pacific Division and 37th-place overall.

Where were YOU during the 2019 November Sweepstakes Phone contest?