When it comes to NAQP contest events, it seems like "Back to the Future", all over again
(sung to the tune of Brian Auger's "Back to the Beginning, Again.....").

In preparation from an upcoming "Blast from the Past" blog about NAQP-Cw, I was amused to note that I have participated in the NAQP-Cw GiGs regularly since 2010; before that, I didn't even know
the NAQP existed.

An advantage (and at once an instant disadvantage) is the 12-hour operating time on Saturday - for us on the West Coast, 10am to 10pm in January and 11am to 11pm in August.  With only 12 hours to work with, there is rarely an opportunity for a DO-over; if you miss something (like a band opening or an operating opportunity), you probably missed it,

For this weekend, my proposed operating schedule was to be:
The theory behind this is that WQ6X can get OP-time on the high bands in the day and the low bands up to sunset (with its Greyline possibilities).  While that is largely what happened, a few modifications were necessary along the way,

At W7AYT's QTH the antenna configuration (for better or worse) has largely stabilized.
When the indoor RF Feedback problems are resolved, then all will be well. 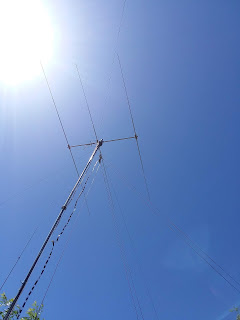 Hard to believe, there are four antennas to choose from at the Concord location:

Indoors @ W7AYT,  a switchbox allows either the onsite Yaesu FT-450D or a cable line to the MFJ 949-E tuner in the other room to select the CH-250 vertical or the Long John yagi.


Contrast that with the 2 13-mh antenna towers at NX6T

﻿
Because this is strictly a Low Power (LP) contest, it is propagation and effective antenna configurations that make all the difference, along with operating skill; not how BiG your
amplifier Bottles are. 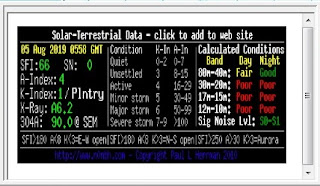 Space-WX conditions are also a contributing factor; something we
largely cannot control, and yet we
must make accommodations for.

I recall NAQP events where a solar event occurred just before the start
of the contest, making the NAQP event all but impossible.  Then again,
at the bottom of Solar Cycle 24, the likelihood of that actually happening
is slim (famous last words).

As you can see there were no solar storms, and yet, 20 & 40 meters were horribly noisy in the Concord area.  Because of the low SFI (66) the upper bands were forecast as being Poor; which
was largely true.  At one point I got so desperate that I used the MFJ tuner to tune the 10-m yagi
on 15-meters, allowing me to turn it to different locations looking for signals.

At 19:54z, Ken K0EU called in from Colorado, for the only distant QSO on 15 meters.
It don't matter how you doit, a QSO point is still a valid point, regardless of the antenna
configuration that made it happen.

In a general sense, NAQP contests are largely a lot of fun.  Possibly for the first time we get to associate a name and QTH with a callsign we've probably heard over and over.  Like Sweepstakes (SS), NAQP is largely a North American affair; unlike Sweepstakes, DX stations are worth 1 QSO point (altho no multiplier credit).  This year many stations were worked on several bands; the "award" going to N6PN who worked me on 15, 20, 40, 80 and yes, even 160 meters.  He evidently missed my CQ on 10-meters; Bummer Dewd. 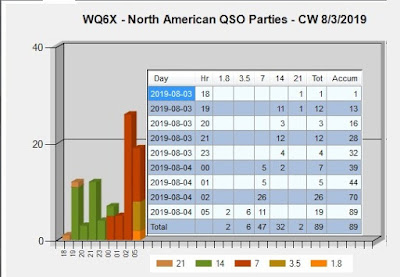 ﻿
This NAQP operation from Concord was fun, yet frustrating.  I was unable to make the afternoon operation very productive.  At the East Bay location, there was considerable fading, along with the noise.  I would hear a station calling and by the time I was done sending I could hear that station quickly disappear into the noise.  Frequent repeats were frequently required. 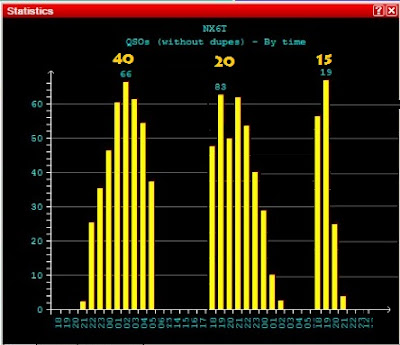 ﻿
By the time it was time for my operating time @ NX6T WQ6X had a whopping 70 QSOs in the log.  Luckily, conditions at NX6T were largely wide open, enough to include a ZL2 caller (off the back of the Shorty-40 beam).  While not spectacular, 80 meters gave up over 100 QSOs overall.

So what about you?

Did YOU play in the NAQP Cw GiG?