WQ6X Sprints thru yet another "Weird" Contest Weekend

It's no surprise that I like to work all manner of radio sport events that congregate over a given single weekend (almost nothing is off adventure limits for me); the March 9th weekend was no exception.

Of the 9 major radiosport events that weekend, looking back I managed some sort of operation in
the following:
There was the prominent Commonwealth Gig; 'cept USA stations aren't part of the Commonwealth and are therefore excluded from the fun.  For the Tesla Memorial contest the log/macros were ready; unfortunately no "CQ Tesla" was ever heard and no one answered my Tesla CQ calls.

﻿
This was a portable operation from W7AYT's QTH in Concord.   Being too lazy "lug around" and install the K3/0,
I took my chances and "suffered thru" using the RCForb to run the radio and VNC Viewer to run the N1MM+ and WINTEST software.

Once we resolved some cabling problems with STN-1 (it's ALWAYs something), the C-31 yagi was pointed to 120-Degrees (South America) and the listening began.

Calling "CQ SA Test" throughout the day yielded no callers, South America or otherwise; not even a LOCAL ham via ground wave.  Well at LEAST we were READY to take another 1st-place - validate THAT fact.

Event-wise, while there were a number of no-shows, luckily GiGs like the OK QSO Party (OKQP)
kept on going throughout the weekend to "keep me amused".  The OKQP web page is quite thorough.  The counties list is WELL laid out.

Arriving mid-afternoon @ W7AYT allowed me to thoroughly check the audio cabling just in time
for the 4 hour RTTY SPRINT GiG.  SPRINT is a unique radiosport GiG in that contestants are not allowed to "run a frequency"; the game is to make a QSO and move on.  While Sprints can seem a
bit chaotic (hence the 4 hour contest period), it's amazing how orderly things can become if everyone pays attention. 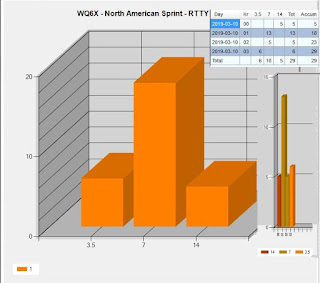 This weekend also gave us a visit from our favorite bird - the OTH WooDPecker.  Woodpecker interference is BEEF #6 in the "Role of Respect in Radiosport BLOG series from June-2018.
WQ6X no sooner started calling CQ Tesla (on 7.007.07) when the Woodpecker began pecking
on 6.995.  The OTH radar pulse width seemed to diminish by moving to 7.018.18; unfortunately,
no callers came back to my "CQ Tesla" calls. 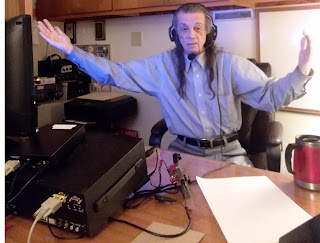 After all the other contest hoopla, I found time to contribute a few dozen QSOs to NX6T's Stew Perry 160-GiG.  Noise-wise, despite the poor Space-WX predictions, we did amazingly well for a screw-around operation.