Being a part of NX6T's CW NAQP 2nd place last weekend was quite a thrill.
While I would have liked to join them for the NAQP SSB GiG, business demands made it impossible to make the trek to Fallbrook.  Even taking the train would have been too complicated for a contest that only lasts
12 hours, of which I probably would have had 4 hours of OP time available to me. 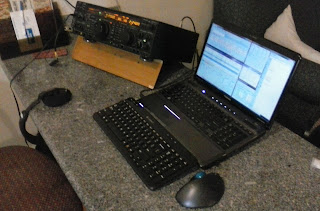 Instead, I decided to put together another infamous WQ6X ad-hoc operation; this time from the 3rd floor of a hotel.  Because my hotel room window there faced more or less east, I thought it would provide a decent possibility of working the contest.


While the solar flux index (SFI) was only 104, all the solar storms seemed to be behind us, as evidenced by an A-index of 6 and a K-Index of 0. 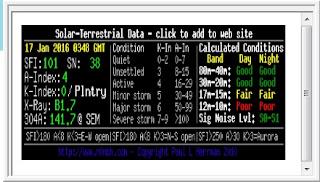 Unfortunately what sounds good in theory doesn't always turn out in the real world.

I tried three different antenna configurations before settling in on something that would actually work.

I ended up running the radio into a cobra dipole hung from the window curtain rods, with their wires hanging out the window.


The 1000mp's antenna tuner had little trouble tuning the radio on 80 thru 10 meters.
Unfortunately, signal levels were way down, altho I was able to work just about anyone I could hear.
To wrap 15 meters, I enjoyed a groundwave QSO on 15 meters with KG6LRI who was just learning the details of playing in the NAQP.

After a lunch break, I came back to discover 10-meters gone (it barely opened up) with 15-meters right behind it. Moving down to 20 meters I managed a whopping 16 QSOs before the band quickly disappeared.  No problem I figured, I'll just move down to 40 and then 80 - WRONG!

At 00:00z switching to 40-meters found an S-9 to +10 noise level, virtually obscuring any signals
that might have been there.  80 meters brought an S-7 noise level with the same problem.

Because of the noise, I was only able to manage 1 QSO on 40 meters (a W6 station) before getting real and realizing that NAQP was over for the  weekend.  Checking back throughout the evening found the S-9+ noise level continuing, until well after midnight.

In essence, the highlight of this portable operation was being able to test the FT-1000mp features under adverse conditions.

I spent considerable time with the operators manual tweaking many of the numerous menu settings that are behind the scenes of the FT-1000mp transceiver.

This weekend also gave a thorough test to the recent addition of a solid-state disk drive to the laptop I use for running contests.  There is no doubt that faster disk I/O makes contest running (especially remote contest operations) perform more effectively.
The next operating goal for the Yaesu FT-1000mp will be CQ WPX RTTY contest next month.

Because of my dismal QSO total I almost did not submit a log but then remembered my own advice from an earlier BLOG entry I wrote this year on the subject of always submitting a log.
It isn't so important how MANY QSOs I make, but just showing up that really makes the difference. 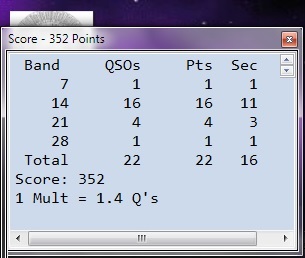 While I was bummed by the small number of QSOs made, I nevertheless enjoyed what operating time I was able to manage.

Until N6GEO manages a new setup or at least a functional setup remotely from Twain Harte, I am going to have to come up with other ideas for bay area operations.

DiD YOU play in the NAQP SSB?

How did it turn out?