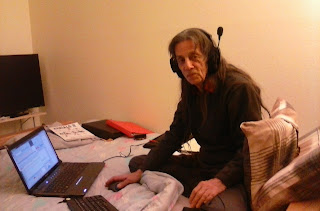 It's hard to believe that it has been two years since N6GEO and myself engaged in a 1st place (worldwide) RTTY RU event as WP2/WQ6X.  Last year (2015) operating as N6GEO we took 1st place for East Bay (EB) section operating from George's Brentwood QTH.

Since last year the Brentwood QTH has been sold.  While George has been working on a remote operation setup from his cabin in Twain Harte, it was unfortunately not ready for this year's RTTY RU.
Client commitments made it impossible for me to make the trek to the NX6T site in Fallbrook so I looked into the possibility of operating remote from Fallbrook's Stn#1 altho actually setup at the W7AYT qth.

With incredible assistance from JR W6JBR we eventually made that happen; altho unfortunately, the 1st QSO didn't happen until 02:15z (8 hours into the contest) - meaning that I missed out on a days worth of access to the 20-15-10 meter bands.

On Sunday, either 10 meters opened up before I rolled out of bed at 10 am and then quickly closed or in fact the band never materialized into the San Diego area.  Either way, missing 10 certainly didn't help my score.  Surprisingly, 20 meters was the worst band of all - missing Saturday afternoon cost me a lot.

40 meters was more packed then I have seen in many a RTTY RU.  I felt sorry for the CW guys; especially that lone station on 7.045 blindly calling CQ at 15 WPM.  I don't know if he ever got a QSO, but he certainly was a brave man to attempt such a feat amidst the cacophony of RTTY signals surrounding him. 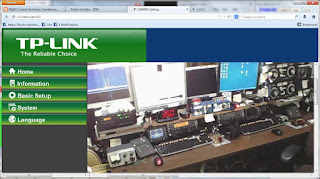 Remotely, this was my 4th experience (1st RTTY experience) operating "from" NX6T in Fallbrook.  Because internet latency is at the core of remote operations, for me personally, remote operating an SSB contest is NOT going to happen.  I get confused enough on CW and even more so running RTTY remote; attempting to run SSB would probably spin out my sanity.


One of the secrets to remote operation is PATIENCE, coupled with no negative self-labeling.  Running the 10-meter contest remote was tricky enough running only CW; I purposely chose NoT to run SSB.

Once I got into action, my biggest BEEF was the fact that most of the spots in the bandmap, while they yielded signals, the offset was wrong giving no decoding.  On my FT-1000mp I would just turn the tuning knob until the decoding starts.  Using a "tuning knob" over the internet is tricky enough on CW, however add to it a little internet latency and tuning RTTY becomes nearly impossible;
which is why some companies sell a remote operation tuning knob. 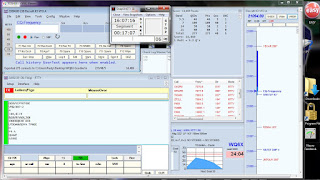 My solution to the tuning problem was to pick a "quiet" frequency and call CQ.  After awhile WQ6X was spotted by the skimmers.  (Because the WQ6X callsign is embedded in every lookup database, recognition of my callsign was automatic.)  Stations lined up and I would get an hour run here and there.
In the end, I probably made 15% of the QSOs by way of S&P; I let the rest come to me. The rest as they say is history.

Because I had to be in Burbank on business, I was originally going to make the drive at noon or 2:00.
Then the internet latency again set in.  To make up for lost QSOs I operated all the way to the 00:00z contest end and was on the 680 freeway at 4:40. 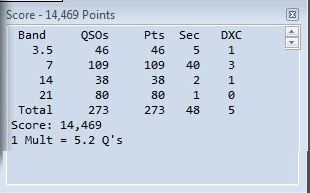 While the 273 QSOs is not all that impressive, research on 3830Scores.Com indicates that after all this I may actually sneak a 1st place win for the San Diego section - GO Figure.


As I said in my previous blog entry, you never know when submitting a "marginal" log will win an award; so, just DO IT!