For this weekend, I made the near-10 hr. drive to NX6T in Fallbrook with hopes of getting a couple of operating shifts and catching up on my mid-day contest sleep - WRONG!

Last minute operator cancellations found me to be the chief OP for our W6V entry into the JIDX SSB contest making 62% of the contacts thanks to 2am operations both nights and running the day shift (something I rarely do) from 1pm to 5pm Saturday afternoon.  But HEY!  I said I wanted operating time to justify my 1,000 mi drive....... 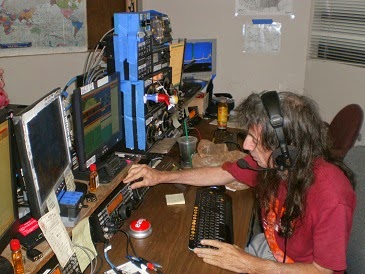 Once again I reserved W6V callsign in honer of Nash, W6HCD sk whose property NX6T has taken refuge at going on 5 years now.  Nash was a principle in the Voyager & Viking programs which sent those satellites to Mars.

For this operation we ran a trio of K3 stations; stations 2 & 3 running on the same band with Stn-2 (me) as a run station and Stn-3 (when manned) as an S&P station for that band.
A clever lockout system keeps the two radios from transmitting simultaneously.

Station #1 was manned remotely (via internet) by K6AM to pick off new multipliers on 10 & 15 meters while I ran a frequency on the other band.  We traded 10 & 15 several times.  Because I could see his bandmap, when a dozen or more spots showed up that he was not allowed to work, we would switch bands allowing me to pick off those spots and begin running a frequency on the new band, while he searched for new multipliers on the switched-to band.

As the contest progressed, every time we worked a new multiplier, a tap on the EASY button would be a lift in morale; especially in the middle of the night when we are looking for exciting things to keep us awake.  Mults make the score, so I am easily excited.

As I have said in previous blog entries, at NX6T we utilize every legitimate advantage we can.  In addition to Mr. Bill and the EASY Button, starting this event we have a new protector for the ACOM amplifiers in the name of Por Que' PIG!

For logging we utilized WINTEST.  While I have come to prefer N1MM+, WINTEST seems to do a better job of controlling the K3's voice keyer channels.  To keep morale high in the last 3 hours of the contest, I recorded the "That was Easy..." audio from the EASY button into channel 4 (where the callsign is normally kept).
After each contact I would press F4: "That wuz Easy!".
I wonder what the JA's thought about that?

40 meters produced the most QSO's followed by 15 & 10, whereas 3 mults is all we could muster on 75-meters.  If you look at the Japanese voice allocations on 75-meters (see pic) it's not surprising they never operate SSB there.  What kind of bureaucrats came up with THIS idea?

For 20-meters, as with recent years the band completely SUCKED, delivering a dismal 62 Q's.  During last nite's dinner hour after those 62 Q's, I turned on the voice keyer calling CQ JIDX, being told that I am LOUD just moments before.  After 55 minutes of DEAD silence between calls I hit the sack for nap number 4.  I remember when 20-meters was THE band for JA communication - probably during our last extended sunspot low. 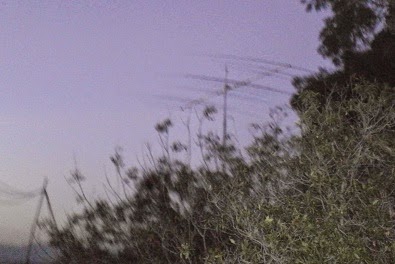 Since my last visit to NX6T in August, they replaced the 3-el Stepp-IR on the 40-foot mast with a Force-12 C31v yagi, which outperforms the other Stepp-IR on the 70-ft tower.  I guess 12-db forward gain DOES make a difference.

Forward gain on 40-meters is nice too, however the F/B ratio on a 2-el yagi is marginal at best - as evidenced by the call from a V31 station (Belize) at 10:30z while I was working Japan. 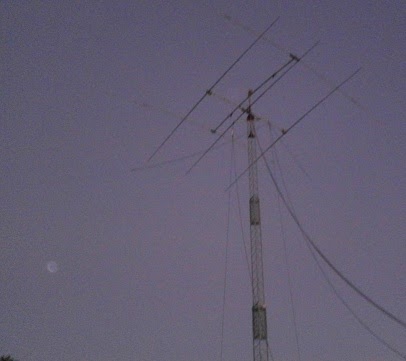 For JIDX, we learned years ago that not enough JA's participate in their own contest running frequencies so we do it for them.  This year I only heard 2 other U.S. stations running a frequency for hours on end like we did.

While the spaceweather information declared an SFI of only 138 with K-indices of 2 & 3 this weekend, for the most part we were not affected by it.  Instead of noise, the borderline hearable stations would QSB in/out of oblivion.  However relaxing my hearing often brought them through.

On 10-meters in Japan it would seem the majority of hams run 10 - 50 watt radios, due to their license class.

I found it ironic early Saturday morning on 40-meters after Dennis & I had been on the same frequency for nearly 3 hours that a station came on frequency and complained that I was too close to his ragchew.  He would recite our call W6V and then say nothing.  When I finally said "Yes?", then he bitched at me..  Uh.... HELLO..... you came on the air later - YOU MOVE on down.  I used the DSP shift knob to knock out his sidebands, while he remained on the same frequency (out of spite it would seem) rather than drop down 2kc (which was clear), making everyone happy.
Eventually they too faded into oblivion.

What never ceases to amaze me anymore is the degree of intentional QRM on 40 meters during contest activities happening in the "wee hours".  I am used to JA's tuning up on me (esp. on 20-m) and then jumping in for the QSO - at least we get 2 points for all that trouble.  However on 40, we get all kinds of weird shit - funny noises, VFO sweeps, belches, bursts of data signals; you name it.
Data signals I expect below 7.125, but NOT above it. 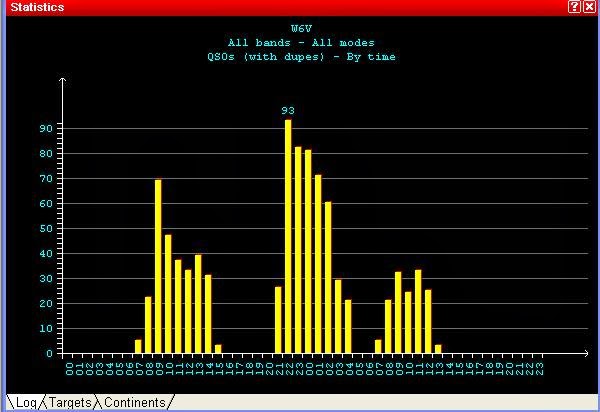 This year's JIDX event was flanked by the WAE RTTY contest and accompanied by the KY QSO party.  Unfortunately, NX6T was not RTTY-ready this weekend; altho K6KAL is remedying that one as I write this on Monday morning.

For the KYQP I made a total of 2 SSB Q's on 20 and 1 Q on 15 - enough to submit a KYQP participation log for which I received a personal thank you from the contest manager.


Overall, this was our finest JIDX SSB event to date from Fallbrook.  We surpassed the 2012 event's 852 QSO's making 889 QSOs with 156 Multipliers.  We worked all prefectures on 40 & 15 except for one on each band.  Overall we worked all available 46 prefectures.  As usual those oddball islands which comprise prefectures 48, 49 & 50 were not active, so technically in SS/CQP parlance we managed a "sweep".  Not bad for 5 dinosaur OPs.

You can view our final results and placement on the 3830 Scores Website.  And in case you're interested you can view all of WQ6X's contest activity for the last 5 years on the 3830 site as well.  Which of those events did YOU participate in? 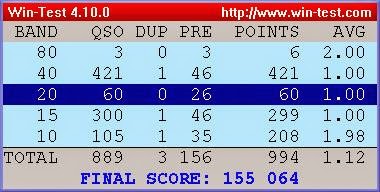 Initial indications are that W6V took the 1st place spot worldwide for non-JA.

Did you play JIDX this weekend?
How many JA's did you put in your log?
Posted by WQ6X at 2:13 PM