While we ran as a low power entry both years using a FLEX-1000 we were limited to 100 watts.  For 2014 we used a FLEX-3000 with its PowerSDR software, increasing it's 100 watt power to the contest upper limit (149 watts) for the Low Power (LP) category by routing the output thru an Elecraft KPA-500 amplifier that has recently made its way to the N6GEO shack. 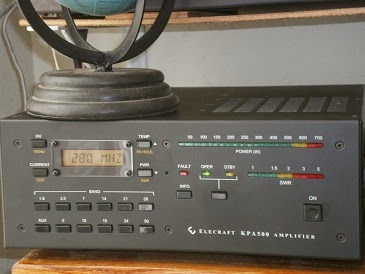 While quite expensive for only 500 watts, I must say, the KPA-500 is one of CooLest running amps I have ever used.  By sensing power fed to it, the KPA-500 switches bands automatically with a tap of the CW key.

For  the higher bands we utilized N6GEO's recently acquired 2-el Stepp-IR yagi mounted on a surplus military mast.  Altho only 8mh, we consistently put out a potent signal for our 150 watts.  Of course the key advantage of the Stepp-IR is the ability to reverse antenna direction with a push of a button.  While working New England, a KH6 would show up.  Pressing the 180 button allows me to work the KH6 and then immediately continue looking for northeast sections; Vermont in particular. 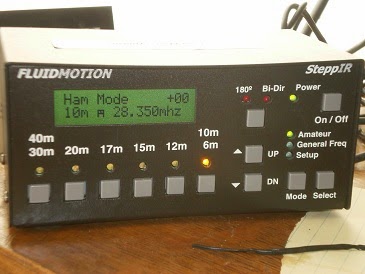 To make band switching easier, George wired up a special cable to connect the Stepp-IR control box to the Intel Xeon-based super computer.  Now when the radio changes bands (or frequency within a band), the 2-el Stepp-IR tracks with the operator.

For 80 & 40 we used a 6-BTV vertical so no special considerations were needed there.

To give us an edge, George printed a set of K6TU propagation charts based on the Brentwood location.  What is important to remember is that those charts are PREDICTIONS of how we CAN expect the bands to be like during actual on the air conditions.  Typically, the chart predictions for this area present a bleak picture of 10-meter possibilities.  The band was actually quite active, altho somehow we leveraged the 10-meter advantage poorly with only 16 QSOs on the band.  Oh well - you can't think of everything.

As we did in the previous weekend's CQ WW Dx contest, George and I split up the operating schedule.  I largely ran the station on Saturday giving George time to rewire the bandpass filters we managed to "tweak" during the CQ WW Rtty contest, as well as other station-related chores.  During that time, I managed to work approx 70+ multipliers by a combination of frequency running interspersed with search-and-pounce techniques.  Work commitments kept me off the air  after 9:30 Sunday morning wherein N6GEO  took over after lunch.  I left George with near-impossible task of working  the last 5 multipliers (NNY, VI, PR, NL & NT) - which he of course accomplished!
In my mind, those 5 contacts were worth 100 QSOs.

Our time scheduling worked perfectly giving us 22 out of the 24 hours we were allowed to work in the 30 hour contest.  Initially I had forgotten about the 24 hour rule.  If I hadn't been so tired, I might have continued on past 09:00z consuming just enough time to put us over the 24 hour limit.

There is no penalty for exceeding 24 hours except that the QSOs made after that limit don't count toward the score; which includes points and multiplier credit.  Luckily George gave us a clean sweep at 00:38z - nearly 2.5 hours before the end of the contest, so either way our clean sweep is secure.

Score wise, we made 522 QSOs compared to last year's 531.  Initially, our score is 1500 points less than the 2013 event however once the Log Checking Robots (LCR's) got a hold of last year's log, our score was dinged down by 10k points due to logging errors.  I am confident that we made way fewer mistakes for 2014, leaving us with an overall higher score for this year.  We shall know in 9 months.  Amazingly, it takes 9 months to bring a baby into the world and 9 months to find out the official results of most major radiosport contests - Go Figure! 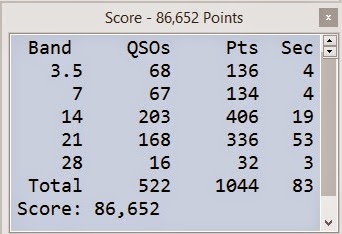 According to the 3830 Scores website we achieved a 1st-place for East Bay section and a 4th place overall for the low power multi-single category.
This weekend the solar flux had dropped to 121 with a 2->3 K-Index.

Here in Brentwood solar disturbances were not a problem except actually on Sunday evening as I wrapped up the contest running a frequency on 80 meters - QSB made difficult copy on the numbers.

As it turns out, our biggest noise source seems to be something local.  Spending enough evenings here at N6GEO I have observed that EVERY evening around 8:20 pm something in the area turns on and FLOODs the 40 meter band with near-S9 noise.
This is how horrible it looked Sunday evening after the contest was over. 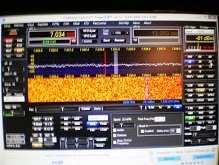 Spending some time frequency snooping with a portable shortwave radio (using the whip antenna as a direction finder) George determined the base frequency to be around 6.725 mhz and coming from one of two neighbors.  (We of course have nothing to bitch about because in a CC&R restricted neighborhood we should not have our "antenna farm" active at all.)  Unlike the CQ WW GiG the noise did not last all evening.
Switching to 80 meters resolved the problem somewhat, but even there a 1/2-harmonic on the noise gave us a near-S6 noise-level to consistently deal with there.
Eventually both went away later allowing me to work 67 Q's each on 80 & 40 meters.

To repeat last year's success I again reserved the W6K callsign.  The N1MM Call.History files evidently have W6K listed for this contest, so why not.  Of course, 1x1 callsigns can sometimes confuse people - although more are getting used to it.  During S&P when I would send W6K and hear a "pregnant pause" or receive a W6?, I would immediately press F4 and fire the callsign once or twice with a pause in between.  Most operators got the message and accepted the callsign. 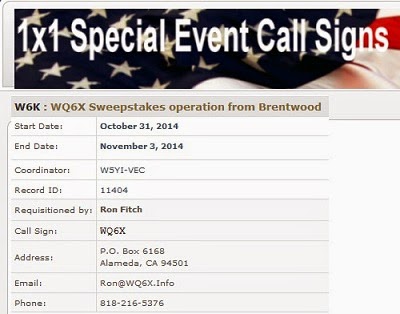 From what I can tell we used the only 1x1 callsign in this year's November Sweepstakes.   Those who know me well, know that W6K is a WQ6X & N6GEO operation in Brentwood.  To keep QSL duties in order, I have been using the W6K call for Sweepstakes since 2007.  Months from now when QSL cards to W6K make their way to my P.O. Box, I know they are for Sweepstakes. 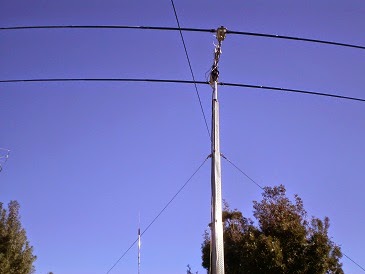 Now regarding Sweepstakes itself, let us remember that the event originated in the 1930's as  a traffic handling practice event.  In case you haven't noticed, what we are sending during a sweepstakes exchange is the equivalent of the header information that is sent at the beginning of every radiogram.

Data in the header is in a SPECIFIC order and an EXACT format:
Your Callsign, QSO NR, Precedence,
My Callsign, Check & Section.

Please do NOT feel free to arrange the data in some other order as K0TQ did; his exchange of "W6K 285 B 64 K0TQ IN" is not only out of touch with the spirit of message header format, it induces operators (such as myself) to ask for a repeat - in my case 3 times - because something about it doesn't "sound" right; even though technically, all the information is there. 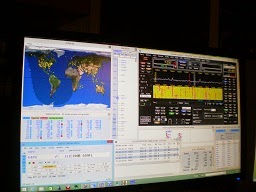 While I'm at it, allow me to make some other pertinent comments regarding operating ethics and skill:

When calling CQ on a run frequency please wait MORE than just 1 second before calling again.  Once I hear you, it takes more than one second for me to properly tune you into the passband and press the F4 key.  Several operators were using 1-second on the CQ repeats, so just as I am about to press F4 they are calling CQ again.  If the CQ is 5 seconds or more, you have wasted my time as well as yours.

Contesting is about proper listening FIRST.  If you had waited 2 more seconds I would have slipped my call in and you would have worked me without wasting time on another CQ; or if we are REALLY out of synch 2 or 3 more CQ's.  When I run a frequency I use a delay of 3.3 seconds.

When you work a station who is running a frequency respect the fact the s/he was there first.  After securing the contact, don't do what KU8Q did when he slid down 0.3kc after working me and start calling CQ - wassup with THAT?!   POOR operating ethics violates the spirit of radiosport in general and Sweepstakes in particular.

Something that I don't hear in CW contests but is not infrequent in phone events (altho more commonly during Field Day) is a station running a frequency who when you call him says "go ahead"; meaning you send your exchange first - WRONG!  When I run a frequency and you call me, I give you my information first and then hope for your info in exchange (that's why it called an exchange).  If you don't give me the information I need, then your callsign does not end up in our log - simple as that.  If you are not in our log, the LCR robot will ding the QSO with a not-in-log (NIL), error costing you those points and any penalty points the LCR may also assess.

That's it for SS-CW 2014.  We had an AWEsome time.  It was great working friends during this year's Sweepstakes.

I celebrated the finish with a tall flute of Mimosa (Cran-Raspberry & champagne) concocted by George's XYL - something she makes very well. in addition to being a great cook. 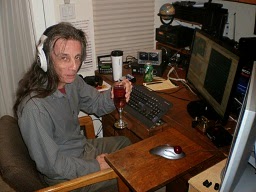 Did you work the November Sweepstakes
this weekend?