For the IARU 2014 event this year I teamed up with George (N6GEO) to operate from his QTH in Brentwood (near Antioch) California.
This year also marked the next installment of the WRTC championship where the best operators from around the world converge on a single location (this year in New England) and compete against each other.  Each of the 59 teams used a randomly chosen 1x1 callsign from the 1st call area.  The results (http://sb.wrtc2014.org/) of the WRTC championship are now known.
One of the U.S. teams took the Gold, by quite a margin.

For this year's IARU we elected to use my callsign as it is becoming more well-known in contest operations; especially since our 1st place RTTY RU win from St. Croix as WP2/WQ6X in January.

Because George's QTH is in an antenna restricted area, as we always do, we setup the  antennas (a ground mounted 8-BTV vertical and a TH-3 jr yagi 7mh) Friday evening just before dusk and took them down Sunday moring after the IARU GiG ended at 5am.  Antennas?  Whut antennas?
For transcieve operations we used George's recently acquired SDR-3000 which performed flawlessly; a way better setup than his earlier SDR-1000 and even the SDR-1500 we used for WQ6X/WP2.

Due to various family commitments George was not able to to spend much time in the operator's chair so I made about 80% of the Cw contacts and nearly 2 dozen  QSOs on SSB.  At 3am Sunday morning as I was debating how to keep my eyes open, George suddenly appeared and took over, finishing the operation for WQ6X in the IARU.

As he did for our RTTY RU operation, George printed out propagation charts for all bands using the K6TU propagation chart service.  Overall the charts were very useful, except that they predicted 10-meters would be dead; surprising since the solar flux (SFI) altho on the decline was sitting at 160. 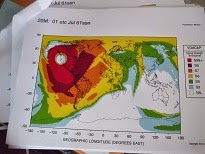 However, instead of relying solely on the propagation charts (which are only a prediction) I chose to actively listen on other bands while operating.  Saturday afternoon blessed us with a 10-meter opening to South America, which was good for a BUNCH of ITU-zone and HQ station multipliers; proof that actual listening is SENIOR to any gimmicks one may use to find stations.

Because we were a multi-0p station we were allowed to use internet assistance in our operation.  That helped us to find rare ones and also alerted me to having been spotted on 20 & 15 meters when I ran a frequency.  It was also fun to watch the WRTC scoreboard LIVE as the 1x1 stations competed against each other. 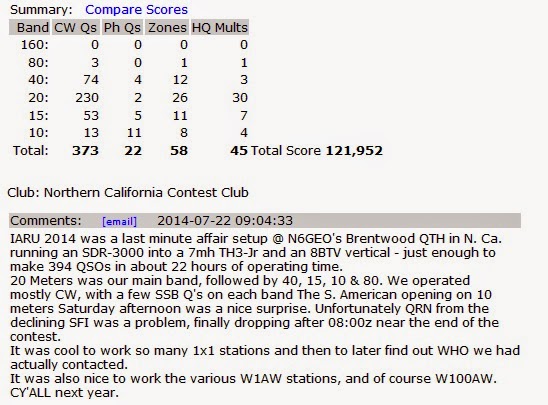 Having submitted our score to the 3830 Scores website, it would seem that we took 11th place worldwide - not bad for a hastily thrown together operation.
The SDR-3000 (software defined radio) certainly did the job.   Here is a picture of the 3830 website submission.

As you can see, 20-meters gave us most of our action, followed by 40, 15, 10 & 80-meters.  With an 8-BTV vertical 160 was not possible.  (We burned out an 80-meter resonator early this year attempting to make 160 meters work with the 8-BTV.)  Unfortunately the solar noise was horrendous on 40 & 80 limiting what could be heard until the noise subsided about 3am, when George took over operations.

While there was plenty of SSB operation in this year's competition, for us it made sense to focus mainly on CW.  Altho when the QSO rate dropped I would check the SSB portion of the band I was on; hence the 22 SSB QSOs.  Per the rules, switching modes required that I remain on that mode for at least 10 minutes, making a band/mode switch a tricky calculation.