Radiosport-wise, my favorite way to start the new year is by way of the ARRL RTTY RU GiG;
run the 1st weekend of each new year.  Altho the WP2/WQ6X worldwide win (with NP2/N6GEO) is now 5 years behind us, that event, followed by our RU wins from EB section since then inspires me every year to do something unique.  For the 2018 RTTY RU GiG, WQ6X took 1st place for San Diego (SDG) section in the HP Unlimited category.
My goal for this year was to duplicate (if not exceed) that section win.

The original plan was to run the Yaesu FT-1000mp from W7AYT's QTH (in Concord) into the recently modified (again!) WQ6X Lazy 8jK Sloper using the recently acquired RigExpert Plus computer/radio interface.  Unfortunately, the "Blue Screen" (after the previous weekend's RAC contest) took the COM ports with it, making RTTY with the Yaesu radio impossible in the 2019 RTTY RU.

Luckily, in anticipation of Dual-OP'ing from NX6T and W7AYT, I brought along WQ6X's secret
"black bag" containing the recently acquired Elecraft K3/0, offering quality access to NX6T remotely.  Unfortunately, the K3 connection to Fallbrook's STN-2 was not responding.  After wasting the 1st 5 hours of contest time, a connection to STN-1 (a K3 + ACOM-2000a) finally came online, putting the 1st QSO in the log @22:58z.  Because we are required 6 hours of off time, the late start made that easy.

Similar to last year, thanks to the remote controlled A/C system, the ACOM-2000A could
run comfortably @ around 990 watts.  Ironically, the shack ran cooler when running stations
one-after-the-other because the listening time (to receive the EXCHG) gives the amp just enough
time to "cool off" after sending the WQ6X exchange.  In contrast, CQ calls generate a considerable amount of heat; which is why it is advantageous to alternate between the [F1] (CQ) and the
[F3] (Tu QRZ?) keys.

Because we have not yet emerged from the depths of the bottom of the solar sunspot cycle, commencing operations @3pm (local time) pre-empted beginning with a 15 meter opening;
that had to wait until Sunday morning. 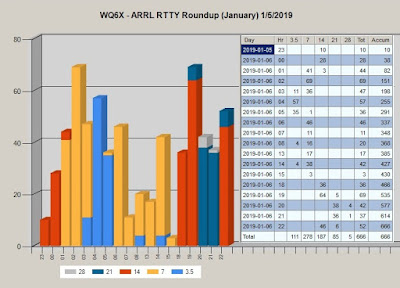 Similar to last year, the secret to 2019's RTTY RU was running frequencies, with an occasional Search & Pounce (S&P).  Because the K3 radio on the Fallbrook end of the connection is not a
dual-receive unit SO2-V was not possible, altho running as Single-OP  assisted allowed using
the spotting networks and skimmers to discover "juicy" multipliers.

Running frequencies in RTTY can be a LoT of fun; especially when it's properly synchronized with the [F-10] NOW key.  However in order for the NOW key to work, stations need to pay attention.  Many times I finish a QSO with the NOW key only to find the next station in line has already disappeared. 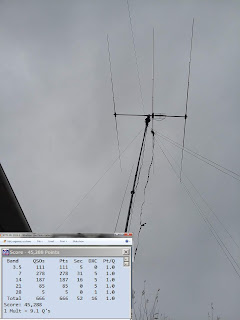 After all the work tweaking the WQ6X Lazy 8jK sloper it is a shame I was unable to run the RTTY
from W7AYT's QTH in the East Bay section.
Nevertheless, the antenna work was time well spent.

The weekend after the ARRL RTTY RU is the North American QSO Party (NAQP) Cw contest.

With the 8jK sloper in its best configuration ever, I should be able to run a dual-OP operation as WQ6X from W7AYT and as a remote op with NX6T's Multi-2 operation from Fallbrook.