From JARTS to Pacificon: WQ6X does it all 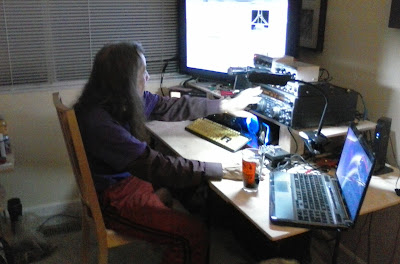 Several weekend's back, the Pacificon convention seemed to appear out of nowhere (even though
I knew about it in September); the same way Visalia DX conventions appear "out of nowhere" in April. WQ6X plays around in so many different "flavors" of radiosport that it's easy to miss a GiG or two;
as happened with the recent Makrothen RTTY contest.
Oh well, "next year" (as we say nearly every year).

I will have more to say about Pacificon later. For now, suffice it to say, I never attended a Pacificon
I didn't enjoy; the woods setting of the San Ramon Marriot is superb.  Aside from Pacificon, my goal for the weekend was to update the WQ6X lazy 8JK sloper and then play in the JARTS RTTY contest running NX6T remotely from W7AYT, along with dabbling in the NYQP and ILQP state QSO parties. 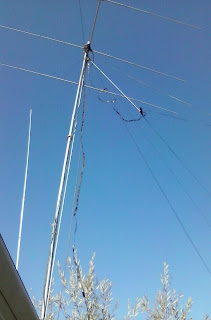 Radio-wise @ W7AYT I got up early (or at least early
for me) on Saturday morning and reconfigured the Cobra slopers back into an 8JK arrangement; this time with a
coax feed on one Cobra and tuned feeders on the other.

In the end, the coax feed worked superbly, while the tuned feeder idea did not produce the hoped for result; something I will address in 2 weeks for the upcoming November Sweepstakes CW GiG.

After the antenna connections were finalized , W7AYT and
I made our way to Pacificon.  Wandering about the vendor area we paid close attention to the antenna vendors.

A lengthy conversation with Mr. Buddipole (W3FF) himself and his son Chris (W6HFP) resulted in Dennis placing an order for their Buddipole-Deluxe package, anticipating some upcoming portable operations.  I've worked W3FF in many contests; adding an eyeball QSO to the log is always appreciated.


Once the hoopla was behind us, I found time for connecting remotely to NX6T to run the JARTS RTTY contest as NX6T (rather than WQ6X).   This was my first experience running a RTTY contest via the K-3/0 remote connection.  The idea was to QSO party hunt during lull periods in the RTTY contest.

Similar to the All Asian contests, the Japanese JARTS (Japanese Amateur Radio Teleprinter Society) GiG the exchange includes
sending of the operator's age.

Thanks to N1MM's spreadsheet-like statistics screen, age statistics can be ordered chronologically.  If we compare stats from the JARTS contest to the All Asian GiGs, we will probably see the same age ranges represented in BOTH contests.

I think it's time to bring some "young blood" into the JARTS contest.  What do you think?

QSO Party-wise, NY was a no-show; in BOTH Concord and Fallbrook. While ILQP participating stations were worked throughout the weekend, as usual, the QSO Party produced a dearth of Illinois stations - wassup with that?

All complaining aside the weekend was a resounding success; antennas were tweaked, K3/0 remote operations were perfected and another pair of contests were added to the 3830 Scores website.
Did YOU play in the ILQP, JARTS or NYQP contests? Is WQ6X or NX6T in YOUR log?