Littered with radiosport competitions, the last 6 weeks have found me operating (and preparing equipment for operation) with little time for actual BLOG typing; altho DURING each contest event
I keep a notepad at the OP position, scribbling down details of EACH notable or bizarre event occurring during that each radiosport GiG. Sometimes, during multi-contest weekends, unique
events can combine in such a weird way, I feel COMPELLED to share them. That is essentially
how this set of WQ6X Contest BLOG Entries came about 5+ years ago.

If you want to see the most bizarre of the bizarre, read the 4-Part BLOG series detailing my BEEFs related to Radiosport events. [CLICK HERE] to read about that.  Now you didn't come here to hear about my BEEFs, you came here to read about RTTY.

While there, the weekend plan included an on/off remote run of the CQ W.W. RTTY Contest. A decision to make was whether to run Low Power (100 w. Max.) or High Power (around 660 watts)
and whether to run an all-band affair or a single-band GiG. The end result was a number of operating compromises that also taught me how to utilize a number of features of the Yaesu FT-1000mp more effectively; [and] in conjunction with the myriad of external audio filters constantly being circulated in/out of service with WQ6X's operations from W7AYT and the troubleshooting work board. 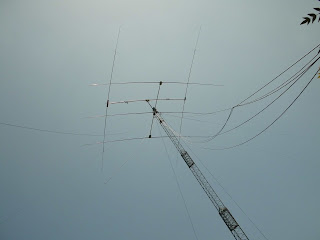 Because the solar flux (SFI) could
not be coaxed above 70, the only GooD thing to say about this weekend (Space-WX wise) is that the A & K Indexes
were almost as low as they can get.

Typical of this period in the sunspot cycle, 10 & 15 meters never materialized @ NX6T, and certainly not @ W7AYT.

By the time I got started Friday evening, 20 meters was already gone, relegating operations to begin on an already PACKed 40 meters.


It was at the last minute I made the decision to run as a low power entry (100 w. during S&P and
55 watts when running a frequency), relying on the antennas on Tower 2 to make up for the lack
of power - they did.

If everything went accordingly, I was hoping to run WQ6X via the WQ6X RTTY Rigger making QSOs from the SF bay area (ARRL EB Section). Unfortunately, I was unable to finish the RTTY Rigger cabling until AFTER the contest - between the RTTY GiG and the TX QSO Party, I had a LoT to contend with.   That relegated operations to running NX6T remotely.

Skimming the log prior to writing this BLOG entry, I was surprised that the first QSO didn't occur until 05:55z (nearly 11pm).  within the hour ZM1A, ZM2B, CR3W, GM3W and a VY2 were in the log.  ZM4T was also heard but his AFC kept jumping him around in frequency; I could not figure how to synchronize with him.

Earlier, I mentioned I have many BEEFs with radiosport (over 20 issues thus far). One issue (detailed in BEEF #7) has to do with what I call "Data Cranking".

If you've ever been on 40 meter
CW / RTTY in the after midnite hours (PST) you have probably heard the occasional "data cranker" and didn't have a name for what you were hearing.

During this year's CQ WW RTTY
contest a data cranker began following me around; I would move frequency, get 3 minutes of "clear channel" and then more data cranking.

The fact that this QRM was "following me around" confirms that it was not accidental or some sort of spurious signal from another frequency or band.  The frequency shifts were just too precise to be a transmitter run by some sort of "QRM BoT".

40-meter propagation was surprisingly POOR, considering that at the bottom of the sunspot cycle 80/40 should be hopping during the late evening time period.  Eventually sleep overtook me.
In the morning I found time (beginning 15:00z) to put a few TXQP contacts in the log.  Unfortunately, throughout the day tuning around for more Texas stations, finding NOTHING - Bummer Dewd!

As I mentioned earlier, the CQ RTTY contest encouraged me to bring along the WQ6X RTTY
Rigger for its first connection to a radio.  While the interface cabling did not occur until AFTER
the contest, not only was there complete proof of concept (or converting a phone patch into an
AFSK RTTY interface), Dennis (W7AYT) drilled several holes into the HD-15 front panel allowing
the installation of several switches and pots, which will make way for switching the VU meter
between RX and TX and the implementation of a pair of diode NL (noise limiting) circuits to
process the AFSK receive audio BEFORE passing it along to the local computer decoding
the RTTY data.


For a weekend that was focused/centered around the CQ W.W. RTTY contest, it didn't seem like there was much actual RTTY happening.  Saturday evening found 40 meters happening and even
a brief opening to South America on 80 meters - GO Figure.

When the contest was over, it was obvious that the 185 QSOs on 40-m was the biggest band total, convincing me to submit the log as a Single Band submission.

Did YOU work the CQ W.W. RTTY Contest?