Just when I thought summer was just getting started, the end-of-July NAQP RTTY contest came
and went. ([CLICK HERE] to read about WQ6X's participation in that event.) Right behind the RTTY GiG is of course the NAQP CW event.  Wanting to run another dual-OP GiG, Friday afternoon I made my way to W7AYT's QTH for the weekend. During the weekend a goal was to investigate different receive audio filter combinations for the FT-1000mp as well as test different antenna configurations for the custom-wired WQ6X antenna phasing switch.

Every remote operation with Fallbrook (whether run from W7AYT or from unknown locations in Alameda) bring with it a unique set of problems; most recently radio to RCFOFB audio connections.  Thursday evening I remoted in to verify the internet connection & the audio; everything checked out.

On Friday evening the audio again failed to come through.
Troubleshooting the problem brought the realization that somehow some of the audio settings in the RCFORB software had "mysteriously" been changed.  When queried, no one owned up to changing anything; or, as my mother used to say: "then "Mr. Nobody" must have done it".  Nevertheless, once the settings were reverted back to their proper settings, everything worked FB.


﻿﻿
Once the NX6T remote access was resolved, then it was time to setup the Yaesu FT-1000mp @ W7AYT's QTH.  In recent weeks I have been running the 1000mp into various combinations of outboard audio filters.  Because I also run NX6T remotely during the same contest, I have worked
out a parallel cabling arrangement between the 1000mp, a Toshiba WIN-7 laptop and a HEIL Pro headset.  The cables are routed directing the internet audio from RCFORB into the input of the
Autek QF-1A filter, along with the transceiver's Main-RX audio.

Directing the radio and laptop audio run through separate isolation transformers keeps unnecessary ground-mismatch hum out of the ears.  Other annoying artifacts can be eliminated incidentally via the PEAK/Lo-PASS filter paths of the QF-1A.  For this weekend's operation, output of the QF-1A was fed into a long-used MFJ 752-C Audio Shaper, before making its way to the HEIL headset.

Running NX6T as a Multi-2 operation allowed a number of different operator configurations; some remote, some live in the shack atop the hill (900' high) in Fallbrook.  At 18:00z on Saturday, N6CY
ran 20 meters remotely while I alternated between 15 and 10 meters.

Because of the surprising 10-meter opening in the NAQP RTTY contest, I was hoping for a similar opportunity for NAQP CW; nope, lengthy S&P'ing and CQ calls yielded a WHOPPING 2 QSOs for
the log.  Luckily, 160 meters (at the other end of the spectrum) produced 32 QSOs to counter-balance the statistics.

For some reason, RF was getting into the K3 on 10 meters causing the radio to power itself off during each 2nd CQ call.  Reducing the power to 80 watts was enough to resolve the problem, but not enough to add more 10-meter QSOs to the log.  The 64 QSOs on 15 meters, while not a huge number, was to me a "bonus surprise".

﻿
Throughout the afternoon WQ6X ran station #1, taking breaks to put a few QSOs into the WQ6X Concord log.

By 03:00z I was back running remote during the "dinner hour".

The last 10 minutes of NAQP were focused on 40 meters for WQ6X.  I was rewarded with QSOs from 8P5, WH6 and KH6, amongst some statesiders.  While WQ6X missed the minimum goal of 100+ QSOs, I DiD manage to fulfill several other operational goals for the portable operations from W7AYT's QTH. 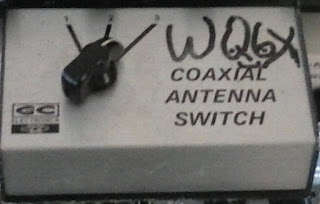 Included in these goals was an innovative way to make use of the WQ6X antenna switch.  This allows running the WQ6X Lazy 8JK Sloper and the CH-250 vertical, either separately or (using  switch position 3) paralleling the coax from those antennas, running the two simultaneously.  While the radiation lobe(s) of these combined antennas are probably WEIRD, a number of stations were heard with the combo that could not be brought through with the individual antennas run separately.

﻿﻿﻿
Overall, the NAQP Cw weekend was a mixture of fun, frustration and WEIRDness.  In the Multi-2 classification, NX6T took 8th place for USA and North America.

While WQ6X barely made an appearance this Cw GiG,
at LEAST I took the opportunity to test antenna sharing
as well as audio sharing

In the realm of audio-sharing, this operation allowed consolidating the previous morass of different audio
cables and multiple "Y" connectors down to two cables
and one junction block.

Combining the laptop audio with audio coming from the radio allowed the possibility of streaming electronic music from Pandora while running frequencies, however occasionally the music would "beat" with the Cw making code copy difficult; which is what Pandora's PAUSE
button is for.

Tuning around 40-meter Cw after the contest I encountered Buddhist chanting on 7.020 Lsb.  The chanting would build to a fervor and then it would be quiet; repeating this cycle every 5 minutes or so.
HuH?  WTF?
Did YOU work the North American QSO Party (NAQP)?
Is NX6T or WQ6X in YOUR log?
Addendum: The original rough draft for this BLOG entry was recently discovered and written up.  [CLICK HERE] to read that entry.
Posted by WQ6X at 4:11 PM