For WQ6X - All Asian is All Over the Place

One of the things I like about radiosport is its seeming predictability.
Every event has some sort of repeating time-frame; usually the same weekend of a given month.


In years passed, I have consistently run some contests (such as JIDX & WPX) from NX6T's station
in Fallbrook; other GiGs (like the November Sweepstakes) from W7AYT's QTH in the ARRL East
Bay section.  Other contests (such as the ARRL Dx GiG) have been run mostly remotely.
Where I called in remotely from has varied widely; from Las Vegas and Laughlin
Nevada to hotel stops along Highway 101in California.

While all different, these events at least have a semblance of repeatable, predictability.
Then, 2018 made the scene.  Thus far this year, contest GiGs I shoulda run onsite (@NX6T)
ended up being run remotely while other GiGs normally run elsewhere ended up as ad-HOC operations from W7AYT.


For the 2018 All Asian Cw GiG, the original plan was to join the NX6T crew LIVE from Fallbrook,
while taking time out to attend a wedding, also in Fallbrook.  Last minute client changes in Alameda sidelined the trip to Fallbrook.  Instead, I spent the weekend @W7AYT's QTH in Concord; the idea being to help put Asian QSOs in NX6T's log (WQ6X made nearly 300 QSOs out of the 900+ total).
In the [so-called] off hours look for Asian signals arriving in Concord.

One of the biggest frustrations in this Asian event was the dozens of non-Asian calling stations to
my CQ calls.  Because the F/B-ratio on a 2-element 40-meter yagi is not all that spectacular, NX6T was quite loud in the Southeast.

Surprisingly however, I received numerous calls on 20-meters from stations all over Europe,
even though Europe is geographically to the Northeast while Asia is to the Northwest.  Sending "ASIAONLY" usually sent most non-Asian callers on their way.  For those stations that persisted
I sent "599 55", ignoring whatever they sent in return.  Pressing Ctrl-W wiped any remnants from
the log.


Due to a shortage of available Cw operators, Rick (N6CY), Dennis (N6KI) and WQ6X all did double (and even triple) duty.  Our dedicated cooperative effort made all the difference.

While running extra duty shortened
my operating time as WQ6X, it was well worth it.

Sometimes we seem to make even more contacts when under the pressure of an operator shortage.


As it turns out, a number of GooD openings to Asia made their way to Fallbrook.  Unfortunately, less than a dozen Asian signals made it too the made it to the FT-1000mp front-end.

There were so few Asian stations heard that I am beginning to think that W7AYT's QTH has a charged RF barrier-shield blocking signals from the northwest.

In the past, attempts to run All Asian and JIDX contests from this location have been frustrating operations, at best.  Then again, openings to the southeast (even tho blocked by trees) seem quite good from this location. 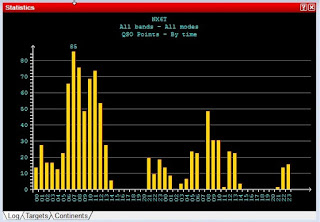 While this year's All Asian
GiG was full of frustrations, there
were a number positive surprises.
Because signals from the middle east are so rare in Fallbrook, for this contest
I pointed the Yagi's due North during greyline periods.

At one point, manually tuning around
20-meters I happened onto a Very
LOUD station tuning up.  Once finished the station identified as: 4X70A.


An immediate call to him put 4X70A into the log.  Within 30 seconds there were 50+ North American stations calling.  I got lucky on that one.

When it was all over, it looks as if NX6T took 1st place worldwide for the high power Multi-OP
Single-Transmitter category; at least according to the 3830 Scores website it would seem that way.
[CLICK HERE] to see the 3830 results.

JUNE 9th 2018 Follow-UP:
I received an e-mail from N6KI (Dennis) with the following certificate attached: 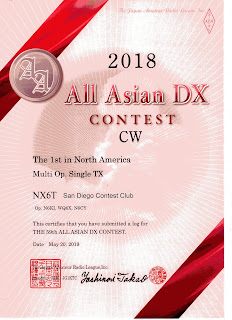