What can be said about a 10-meter contest in the winter time at the bottom of the sunspot cycle?  Last year, my solo attempt at the 10-meter contest was a complete bust; my 36 CW QSOs hardly made a showing.


That portable operation lacked an antenna which would radiate much; PJ2T and KH6LC being the only non North American QSOs made from
the 3rd story hotel room.


For 2016, I was unable to make an appearance in "NashVille"; instead adding some SSB QSOs to the NX6T log running remotely from the
SF bay area.

Before the 2016 event began I was dismayed to see the HORRIBLE space weather predictions; making me glad I didn't make the drive to Fallbrook.

While propagation conditions largely favored North and South America,
as it turns out there were certainly QSOs to be made.

For NX6T, Europe and Africa were all but non-existent; which makes me wonder if I would've done better for myself to setup the FT-1000mp at W7AYT in East Bay (EB) section: Woulda, Shoulda, Coulda. 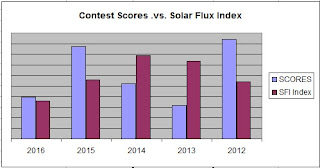 Because we are entering the final months of solar cycle 24, after the contest was over and N6KI posted the NX6T score on the 3830Scores.Com website, curiosity struck me to analyze the last 5 years of NX6T's 10-meter contest involvement, plotted against
the Solar Flux Index (SFI).

While the general consensus is that higher scores occur during high[er] SFI numbers, at NX6T it would seem that the reverse is what actually happens.

Normally there is a shortage of CW operators in contests from "NashVille".  Except for last year, the 10-meter contest is largely an exception.
The original idea was for me to remote-in and run CW for a couple of hours.
Because we were well-equipped CW-wise, I remoted-in search-and-pouncing on SSB by way of the WINTEST function keys which invoked the voice-keyer channels in the K3 radio.

If I sounded like Dennis (N6KI) it is because he recorded HIS voice on Station-1's radio before
turning it over to me remotely.


While this year's 10-meter contest was a tough-GO, as it turns out, we performed way beyond what
I had originally predicted.

NX6T probably secured a distant 2nd place for the U.S.;  partially because everyone else experienced a reduction in QSOs between this year and last.

Did YOU play in the ARRL 10-meter contest?