While the location sports only a vertical antenna, for ease of setup the location can't be beat.  Dennis' other contribution to my operation was some EXCELLENT homebrew food Saturday evening.

For this NAQP event my main goal was to learn/perfect the art of SO2V (Single OP, 2 VFOs) encouraged by a VE3 writeup on the subject.  Reading all about SO2V is one thing; making it actually work is a completely different contesting challenge than what I am used to. 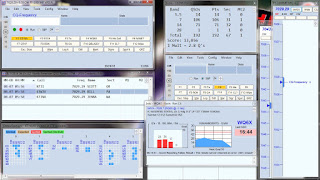 Luckily, the FT-1000mp and N1MM software are integrally integrated.  The N1MM keyboard layout to make SO2V work was well thought out; using keys on both sides of the alpha key structure.  My only beef with N1MM is that during program startup the ENTRY window for VFO-B is hidden behind the window for VFO A - even if you save window positions before shutting down the software.


In implementing SO2V, a number of times I got frustrated and manually swapped VFO A & B to quickly make the contact so as not to confuse the station on the other end.  Eventually I got the feel for SO2V and it became more "fluid".  Practice (and not giving up) breeds more precision.  It will be interesting to see if I can repeat the SO2V experience in 2 weeks for the NAQP SSB contest. 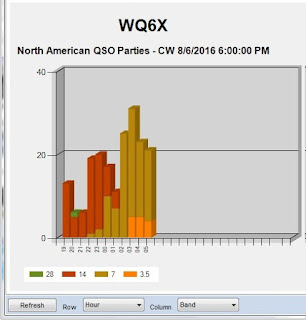 Space weather wise band conditions above 15 mhz were rather bleak at the W7AYT QTH; altho it seems that most W6 stations shared a similar experience.  I only worked one W6 station above 15 mhz (on 10 meter CW).

Other W6 stations suggested that 15 meters possessed sudden propagation shifts allowing them to work other countries.  In retrospect I should have checked 15 meters more often.


Country wise, the only entity I worked was NP2X (Virgin Islands) on 40 meters.


20 meters became the predominate daytime band followed by40 meters during the evening. Although I made a number of 40-meter run attempts throughout the afternoon, they yielded merely a handful of QSOs.  Considering that I had run out of 20-meter stations at that moment I guess the switch to 40 meters at those times were warranted. 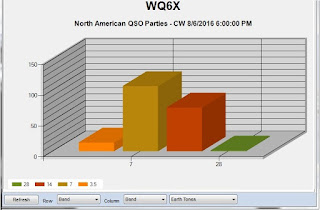 Surprisingly, altho I ran the Yaesu into a roof-mounted Comet CH-250 vertical, the noise level at W7AYT's QTH was quite low - no need for the 1000 MP's DSP noise reduction facilities.

Unfortunately, signal levels were ALSO way down.  Whether that was due to the use of a (no-gain) vertical or the poor propagation conditions has yet to be determined.  Nevertheless I managed to work virtually every station I heard.

As a part of SCCC Team #1, I operated in conjunction with a lot of "heavyweight" operators.  Out of the 6 members of Team #1 while my score was at the bottom of the heap, the bottom line is that I did the best I knew how with the setup I had available to me and improved my operating skills considerably this weekend, making it a worthwhile endeavor for all concerned.

Because NAQP requires a minimum of 2 hours off time for single-OP stations, part of the contest strategy must include when to start and when to take the mandatory 30+ minute (minimum) breaks.  I took a risk and began operations at 19:00z (12 pm local) - one hour into the contest.  Due to poor band condx I found two other off time opportunities, for lunch while ostensibly "waiting" for space WX condx to improve; which it eventually did.

Unfortunately, this contest's 80 meter activity was quite a disappointment.  While I was able to work up into Washington, east to Colorado and Kansas and into Southern California, the actual number of stations on 80 meters was very small.

The CH-250 does not natively work 160 and I did not bring a manual line tuner so working top band did not happen in this contest. 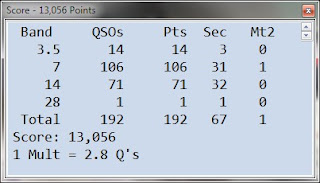 In retrospect while the QSO count in this summer's NAQP contest was much less than I am used to, the upside is that there were no equipment failures.


The WQ6X callsign made yet another contest appearance for 2016; becoming one of my more contest-active years.


Before I forget, the WEIRDEST thing about this NAQP-CW was working a DOZEN people with the name MILT; most of them in AZ.  Before this event, I RARELY see the name Milt in NAQP.  Wassup with Milt?

Did you play in the NAQP CW contest?