Next to Sweepstakes, CQP is my favorite operating event, followed of course by Field Day.  The 2014 CQP was no exception.  In CQP, California stations are the sought after entities.  To some degree all that is needed is a "clear" frequency and the stamina to work a pile-up; if the conditions hold up, of course.  Then again, working all the multipliers requires diligent search-and-pouncing;
something we did not do enough of on 40-meters. 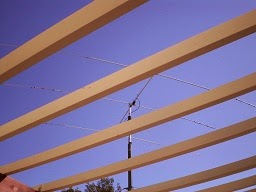 In preparation for a semi-expedition to Twain Harte (Tuolumne county) I reserved the 1x1 callsign K6U (the 1x1 "T" calls were already reserved) and made a special CQP page for that location.  As it turned out, at the last minute, an SK in the family of George's XYL relegated us to cancelling the expedition and operating from N6GEO's home QTH in Brentwood, N/E of  SF, in Contra Costa county (CCOS).  There is a link on the current CQP 2014 K6U page to the Tuolumne page.
In the end, we may well have put together a better operation than we would have in Tuolumne.

We ran as a low power multi-mult operation, to avoid competing with N6O (aka N6RO).  Running the amps at a cool 190 watts allowed us to compete as a low power entry.  Because the KPA-500 faults at an SWR of 2:1, we put an old Kenwood AT-130 antenna matcher in line when operating in the SSB portions of the bands.
According to the 3830 Scores website being a low power entry may well give us a 1st place in the Multi-Multi LP category - go figure. 1st-Place may salve the sting of missing a section sweep by 2 sections: ID & SK.  VE5 was a problem for numerous California stations.  I was feeling pretty good when we snagged VE1, VE8 & VE9 early on, not realizing that what should be easy was actually impossible.  Vermont usually comes late in the gig - this year in the last 3 hours.  ID would probably have not been missed if we had run more 40-SSB.  In place of 40, I ran a lot of the NW stations on 80; unfortunately, ID was not one of them.

Score-wise, we just missed beating our 2013 160k score from Modoc (971 QSOs versus 1107 last year).  However we ran a considerably higher CW-to-SSB ratio for the contacts we did make giving us a score of just over 150k points.

This year the hardware failures were in the form of traps and bandpass filters. We managed to smoke out the 10-meter bandpass filter twice.  I smoked it, then George rebuilt it and promptly finished it off less than 90 minutes later.  The bandpass filters allowed us to use the N6GEO homebrew yagi multiplexer giving us the ability to share the TH-3 jr yagi - both of us on a different band.  W/o multiplexing one station was relegated to using the 6-BTV vertical.

To operate 80-meters on Saturday evening George front-ended the vertical with a KW Dentron antenna tuner for operating a more effective match.  Unfortunately, when I bypassed the tuner and returned to 40-meters, I couldn't get a match that would stay.  As soon as it was tuned, it would drift out of resonance, ad nauseum.  So much for 40 meters,

The atmospheric noise this weekend was still pretty high (from earlier flare activity), made worse of course with the 6-BTV vertical.  Some of the atmospheric noise "enhancement" made strong signals sound like they had key-clicks, which of course I knew was not true.  It makes me wonder what OUR CW signal sounded like.  The noise also distorted weak-signal SSB stations, making unnecessary repeats necessary.

Speaking of repeats.  This weekend approx. 1/2 the stations who worked me included "599" in their exchange.  Read the rules folks - only Serial # and QTH are part of the exchange.  When working W1AW stations a 599 is necessary, but not during CQP.  Next, when I ask you to repeat your Serial # (NR) - do NOT send 599 again; not only is it unnecessary in the first place, if the QSB is heavy, by the time you get to sending your NR, you will have faded out again, requiring yet another repeat - simple logic right? - evidently not, because I bring this up every year.

While this year's CQP operation turned out quite differently than we had intended, George and I are quite flexible (with two FLEX radios no less).  CQP like Field Day is an exercise wherein we lash together an efficient operation.  In the 5 years N6GEO & WQ6X have run CQP together, no two have been alike; each earning some sort of award for our efforts.
Hopefully 2014 will be another award winner.