CQP as W6C - After the Fact

October's CQP event presented a unique opportunity for engaging in a Dual-OP weekend; as W6C in Contra Costa county and as part of the team @ NX6T in San Diego county.   During other radiosport events this year WQ6X has dual-OPed from W7AYT's QTH and NX6T in Fallbrook.  CQP was an obvious GiG to go for, putting multiple counties on the radio.

Before the CQP event, I searched CQP results from previous years, writing a pre-contest BLOG
entry regarding my findings.  With 3 county record events behind me (2014 Multi-OP from CCOS, 2016 Single-OP expedition from TUOL & 2017 Single-OP event from CCOS), I was
looking for a new challenge.  For 2018 N6GEO ran an award-winning operation from Alpine
county.  Taking the easy way out, I ran another event from W7AYT's QTH in Concord. 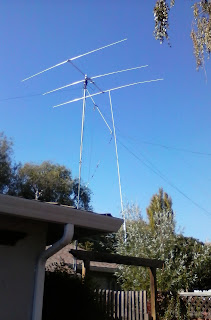 This CQP operation offered up the opportunity to test-run yet another configuration of the WQ6X Lazy 8jK sloper at the W7AYT QTH.

The Hy-Gain 3-el 10-meter "Long John" yagi contributed
a WHOPPING 6 QSOs to the W6C log, allowing the claim
of 10-meter Cw and Ssb operation during the CQP weekend.

Using the onsite Comet CHA-250 vertical gave low-angle transmit capabilities altho is a considerably more noisy antenna than the 8jK.  Transmitting on the CHA-250 and receiving on the Sloper offered a reasonable compromise.

A surprising discovery is that the 3-el 10-meter yagi not only loaded up on 15-meter Cw but enabled a handful of QSOs as far distant as a W1 station in New Hampshire.


While THE antenna farm @ W7AYT is nothing compared to the towers @ NX6T in Fallbrook, it produced an amazing strong signal to the W0/W9 call areas as well as the surrounding VE5, VE4, VE3 & VE2 provinces.  The WQ6X CQP web section has been upgraded to reflect the 2018 event.

While WQ6X did not set any new county records, my previous records remain intact, preserved
by the county win for Contra Costa and the fact that N6GEO chose to operate from Alpine county,
not Tuolumne.  While this was my 1st dual-OP for CQP, hopefully it won't be the last.

DiD YOU operate the 2018 California QSO Party?
Is W6C or NX6T in YOUR LoG?