FD 2016 is only the 2nd time in 31 years that I have not joined the San Andreas Faultline Survivors for Field Day on Mt. Able (in Southern Kern county 55 mi. N/W of Los Angeles).  For 2016, client commitments before and after FD made a drive from the SF bay area (300+ miles each way) impractical  when you consider that I pretty much single-highhandedly put together a campsite and 20 meter CW station along with assisting in the near dozen antennas the group hangs from trees.

During Field Day weekend, N6GEO is usually in England on business for Livermore Lawrence lab.  Because this year was an N6GEO exception I simply loaded up the Honda Accord with the FT-1000mp and it's outboard accessories and made the drive to George's QTH in Brentwood (SF East Bay) where we loaded up his monster truck and made the 3 hour drive to his cabin in Twain Harte;
the same cabin we ran the CQP contest last October as W6E.

I almost brought a Coleman InstaTent to setup outdoors, but was too lazy to stuff it into the back seat of the Honda (Insta Tents are "insta" because the pole structure is built right in.  The trade off is that the unit is HUGE compared to the camping tent I usually pack with it.)
As it turns out, George became our "outdoor operator". 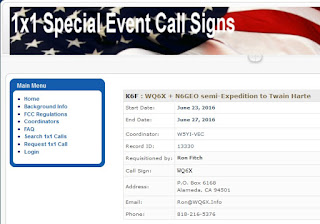 Because we arrived Thursday , technically we were not allowed to do any station setup or put up any "new" antennas until Friday morning.  However, because we essentially operated out of a "home QTH" (albeit a cabin vacation home) the rules did not prohibit us from adding extra radials to an already existing military-style vertical (front-ended by an SGC-250 external auto-tuner).
While were at it we gave the other antennas (a 6-BTV vertical, an OCD Dipole and a homebrew
3-element 6-meter yagi) a thorough inspection with an MFJ-259 antenna analyzer.

Friday morning found us laying out guy lines for a 36' pneumatic mast with a TH-3 jr at the top.  We couldn't find the time to run rotor cables for the yagi, so we used the infamous "Armstrong method" to rotate the antenna.

Then again, most of the time the yagi was pointing north to northeast, favoring where the most signals come from.  Having two multi-band verticals available allowed us communication in other directions; including Hawaii (KH6) and Puerto Rico (KP4).
Attempts to convince our friends from "down under" to look for our callsign produced no DX QSOs.

I brought along the usual pair of Cobra dipoles I bring for every field day to make a multi-band 8JK array or the infamous WQ6 multi-band  8JK sloper.  Because the already-resident antennas were more than adequate, we chose not to go to the hassle of making 1 - 4 additional antenna line shoots.

Friday afternoon gave us plenty of time to organize the cabin for a dual station operation; me running the FT-1000mp on the BiG wooden dining room table and George first on the desk in the living room, quickly changed at the last minute to run his Elecraft K2 from an umbrella covered table on the outside patio.  The weather was perfect for outdoor operation.  I was almost envious of his outdoor setup until 8pm (local time) when the sun set and it got a little cold.

Power-wise we ran a Honda generator the entire operating period with a specially chosen AC-line RF filter to keep line noise out of the radios.  Because we ran bandpass filters on each band we were also able to pretty much keep out of each others radio except for the direct 2nd harmonic from 40 meter CW to 20 meter CW (or 80 CW to 40 CW) and an occasional SSB harmonic from 7.155mhz to 14.310, encountered when searching and pouncing on the upper end of 20 meters.

One of my FD goals for 2016 was to include some form
of digital communications - in my case RTTY; because RTTY is FUN.  Additionally, like CW contacts, digital contacts are all worth 2 points; whether you run RTTY, PSK-31 or even JT-65.  Unfortunately, by the time FD came around I had not worked out a keying-relay cable
for the FT-1000mp.

Luckily, N6GEO is an accomplished RTTY & PSK operator.  George's trusty Elecraft K2 put 13 RTTY & PSK contacts in the K6F log along with a 7 SSB QSO presence on 50 Mhz, thanks to a homebrew 3 element 6-meter yagi.

George also gave us a brief presence on 160 meters; not bad considering the vertical was tuned for 80 meters with no 160 meter loading coil.  (It is amazing what antenna tuners can do.) 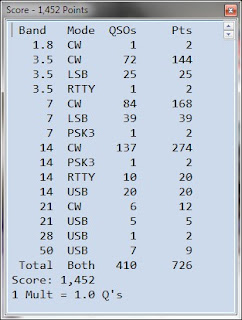 As you can see from the Summary Stats there was not much activity for us on 10 or 15 meters.  In fact, N6GEO made more sideband contacts on 6 meters than on 15.  In a way this is not surprising when you consider that the low-angle reflection possibilities were largely inhibited by shallow hills not far from the Twain Harte QTH.

As George and I are both CW operators it is not surprising that 20-CW was the most productive band mode this year.  At W6SW, typically I am the 20-CW operator for the group, so I felt right at home at K6F.
We both made quite a presence on 80/40 CW.


My biggest beef during this year's FD was stations just JUMPing on frequencies to call CQ w/o listening first and/or asking "QRL?" before assuming that a frequency is available.  When you consider that Field Day encourages novice/beginner operators (as well as station visitors who
barely know what amateur radio is) control operators at each station should take extra
responsibility to insure that their operation is as QRM-free (to other stations) as possible.

Amazingly, the usual intentional 40-meter QRM I have come to expect in contests after 05:00z did not materialize this year; no belching, no VFO swishes, no stray RTTY.  Unfortunately the nightly South American SSB idiots on 7.018 were out in force which gave us a reason to operate on/around 7.033.  Then again, because of our foothill location we did not hear any of the Russian 'letter" beacons on 7.039.

With an extra 1 or 2 operators we could have made an even greater presence of the higher bands as well as modes like RTTY and Packet.  George and I have the same feeling concerning our CQP operations; especially from Twain Harte.


Next year look for me to rejoin the W6SW team and drag N6GEO along.
There is a rumor that friends from VK and/or ZL land will be visiting California for next years event.

While I truly missed playing with the Fault Line survivors this year, their FD report indicates that they survived without me and we survived “roughing it” at the Twain Harte cabin.

WQ6X takes 2nd place for So. Ca. in NAQP RTTY


This was a last minute remote operation at "NashVille" (@NX6T) from a "secret location" in the SF east bay.


This past week with assistance from the techs at West Mountain Radio, I built a one transistor relay driver
enabling the FT-1000mp
RTTY-able.

The goal was to operate RTTY from a location in the SF east bay.  Unfortunately, at the chosen operating location, signal levels were almost non-existent, making remote operation my only option for this weekend.

Luckily, with last minute assistance from W6JBR
and N6KI to debug internet problems, I managed to accomplish remote access to the Fallbrook station;
altho in the early contest hours internet latency was HORRIBLE.

As a result, I took a gamble and used the 20:00z - 22:00z period as my "off time", waiting for the internet latency
to settle down (which it eventually did).   Luckily, the Giants .vs. Padres game was on TV while I ran
the contest.  (Unfortunately, the Giants lost.)

Taking the mandated 2 hour early off-time allowed me
to work the contest up to the 06:00z ending time, along with the remaining single-OP & multi-OP stations.

An upside to this remote operation was virtually no background noise to deal with, altho because of the K-Index of 3, I noticed a funny echo on a few signals; especially those coming in from Europe.


The station consisted of an externally fan-cooled Elecraft K3 (running 59 watts) into a C-31XR yagi for the high bands, 2-elements on 40 and an inverted "V" for 80 meters.

Because it is not easy to manually tune in some RTTY signals remotely (when no spotting-assistance is allowed),
rather than S&P, I chose to run frequencies having stations come to me.

Unfortunately, this created a new problem when stations would call considerably off frequency such that FLDIGI could not demodulate their text, no matter how LOUD
they were.  Because using RIT remotely (with poor internet latency) to tune stations in is not possible, I resolved this by allocating N1MM's F-11 key to send the message: "You are off frequency - tune me in", followed by F8 ("AGN? AGN?"), or F3 ("TU QRZ").


My thinking is that if you are copying me correctly when you receive the message you will make sure that your Xmit/Rcv frequencies are the same when you call me.  Most stations got the message and then called me on frequency.

Amazingly, I actually had one station COMPLAIN because I would not (meaning I COULD not) tune him in - CHILL OUT DEWD!  With poor internet latency, my trying to tune YOU in will actually slow things down for everyone else waiting to work me.  If you want a QSO, it is YOUR responsibility to BE ON FREQUENCY, not mine.
A big disappointment was when I couldn't complete a
20 meter QSO with an IK4 station because the internet froze and I could not send him an exchange via N1MM's function keys.  By the time I was back in normal operation, either the IK4 was gone or so were the signals from Europe.  If I seemed to "disappear" on you, the reason was probably poor internet latency, not because I was ignoring you.


One of my beefs in this contest had to do with stations sending unnecessary information; most specifically "599".  Because there are no signal reports required in NAQP (a ridiculous piece of
data to send during a contest anyway) sending "599" once or twice is not only confusing, but when signals are low, by the time you get to sending the NEEDED information the signal drops out.
In MOST cases, stations that sent a signal report faded out afterwards requiring me
to request a repeat of their exchange once or twice.

It also amazes me when a station calls me (along with other stations), only to then immediately call
CQ on my run frequency if I work another station first.  WTF is THAT all about?!

Sparse activity on 80 meters was a HUGE Bummer (only 10 QSOs),  along with no signals heard on
10 meters at the Fallbrook location; altho other Southern California stations listed 10 meter
QSOs in their 3830 score website submission.

Nevertheless it was a FUN contest allowing me to work a number of W6 friends.
While I didn't make a GREAT showing in the contest, according to my 3830 Scores website submission, it would appear that I DiD make it to 2nd place (behind W6TK in
Santa Barbara) amongst all the Southern California submissions.


When you consider that the rest of the Southern California stations had the advantage of
working from their home QTH (with no internet latency problems to contend with), it is surprising
that I scored higher than they did.  Next year look for me to run NAQP RTTY using the FT-1000mp with the West Mountain Plug-N-Play unit adapted to key the radio.

Did YOU work the NAQP RTTY contest?