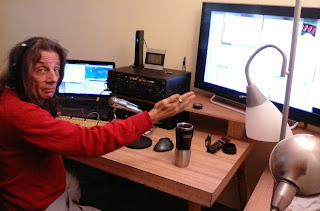 The November Sweepstakes is my favorite amateur radio competition.  In years past I have operated numerous Sweepstakes events several times from a house in Ojai, a campsite off Carpinteria state beach, several times in tandem with N6GEO in Brentwood (earning several 1st place certificates and a plaque), and last year Single-OP unlimited from W7AYT's QTH in Concord, which resulted in a surprise win of the Pacific Division plaque.

No doubt about it, this year's phone event was one of the most difficult Sweepstakes operations I've ever run; almost as difficult as my 2008 operation from Carpinteria State beach.  To begin with, what makes this year's operation so amazingly difficult is that while the A & K indexes were quite low, the space weather forecast still listed the upper bands as POOR; which they in fact were.

During this year's phone event, for me in the East Bay section, 10 meters was non-existent and 15 meters produced less than a dozen QSOs.  Thinking that might auger well for 160 meters turned out to be yet another Sweepstakes fantasy; no one responded to my futile CQ SS calls on top band (around the top of several evening hours and during the final contest hour).

Section-wise, this was one of my worst Sweepstakes operations EVER.  While finally managing to work Nebraska (K0NEB) a number of "easy" sections were surprisingly missing for WQ6X including EMA, NLI, EPA, SFL, KY & LAX - HuH?  Several sections (such as ND, SB, SC & MS) were heard working other stations but could not be coaxed into my log.

Lengthy exchanges can put a lot of stress on the voice; a problem that we resolve by using "voice keying": playing voice recordings through the transmit audio.  While some radios have built-in voice keying (such as the Elecraft K3, ICOM-7000 and Yaesu radios with a DVS attachment unit), for non-equipped radios, the N1MM contest logging software sports a facility to play .WAV files ("attached" to function keys) through the computer sound card.

I devised an isolation circuit using a Radio Shack audio transformer to eliminate ground loops between laptop and computer; which it did.  Unfortunately, paralleling the output of the isolation circuit created such an impedance mismatch the microphone output was almost non-existent.  While each worked fine separately, running them together was not possible.   For some reason, the patch jack on the back panel of the FT-1000mp was not mixing properly with the transmitted audio.

Unable to find a mic splitter unit on a moments notice, I retrofitted a PTT button to patch the computer audio in during transmit periods; a BiG hassle, and, it worked.

As I was packing the audio cable bag after the contest, I remembered I had bought TWO audio transformers which could have solved my problem w/o a switch arrangement.
Oh well, I'll be ready for December's 10-meter contest.


While Sweepstakes is a training exercise, most advanced operators are willing to take a couple of minutes to walk a contest-newbie through making a proper Sweepstakes exchange.  I remember listening to K5NA as he patiently explained the exchange information to someone who just happened onto his Sweepstakes activity late Saturday afternoon - well done.  Last year's newbies are this year's competition for section awards - go figure.

For this Sweepstakes event, fading-IN then fading-OUT was the predominate experience.  Listening to KL4SD I realized he was on a sinusoidal fade in/out.  Making my call to him on the fade in he heard me S-9 gave his exchange and then faded out.  I waited several seconds before responding to him on the next fade-in.  The same thing happened for snagging Hawaii.

Running two antennas (a Comet CH-250 vertical and a 7mh Cobra pseudo inverted vee), the Yaesu FT-1000mp was able to quickly switch between the two looking for the best signal.  While sometimes slow to auto-tune, the 1000mp kept everything matched.  As for the actual radiation efficiency of the two antennas, your guess is
as good as mine.

Nevertheless, it seemed that I could hear signals way better than they could hear me.  At various times I would call CQ for 10+ minutes with no reply.  Then, switching to VFO-B I would S&P a station, working him on the 1st call.  HuH?

Saturday afternoon found the laptop docking device to
be prone to stray RF on 21 mhz., causing the COM1 & COM2 ports (controlling the radio) to disappear for inordinate periods of time; one of the major reasons
I spent such little time on 15.  However overall, the Dynadock kept the USB port access well under control, making it a worthwhile addition to WQ6X portable station operation. 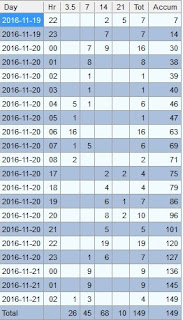 One of my "beefs" during this year's Sweepstakes were the many stations obviously running SO2-R that would then "disappear" for long periods when moments ago they were S-9+.  As usual, I made several calls to the station with no response, followed by "QRZ the frequency".

Hearing no response I would then press F1, calling my own CQ to claim the frequency.  Shortly after my call, the station would suddenly "wake up" and blindly call CQ, oblivious to the fact that the frequency was now in use by someone else - NoT OK!

While I was running SO2-V, occasionally I would get so hung up S&P'ing that my run frequency would be taken over by someone else.  Because the old saying "you snooze, you lose" applies to me too, in those situations I did the only ethical thing - I found a NEW run frequency; or waited for the station to QSY on his own, before claiming the run frequency again.  As is usually the case, I heard less than a handful of stations inquire "QRZ the Frequency?" during the ENTIRE contest.

Not listening ALSO occurred numerous times when a station would be running a frequency and pause after working a station.  During his pause I would send my callsign, only to hear him then call CQ, responding to my SECOND call.  BEFORE calling CQ we should always LISTEN FIRST for anyone calling us.  Making a CQ call when a station has just called you is not only poor operating courtesy, it also unnecessarily wastes a LoT of time. 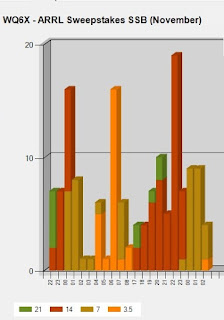 Another concern this year is with stations who should know better, running so close to the band edge that their splatter was technically OUT of the phone segment.  At 20:31z one notable Texas station was running a frequency on 14150.48.  With his kilowatt and speech compression, splatter was easily heard down to 14146.

Come on guys, get with the contest rules.  There was PLENTY of room above this station for him to have moved to 14.153, or even higher.
Because Sweepstakes is a training exercise, proper operating ethics should be the uppermost priority.  Anyone can win by violating the letter and spirit of the rules. The real PRO wins while making NO violations.

When it was all over I had amassed only 15 hours of OP time; starting 2 hours late and sleeping in on Sunday morning.  Due to questionable band conditions I only managed one good run frequency from 22:37z - 22:51z for a WHOPPing 12 QSOs during that period.

Altho 2016 made for a frustrating pair of Sweepstakes operations, I would not have missed this one for anything - each portable event brings its own challenges.  While I didn't win a Pacific Division plaque, 1st place for East Bay is still in the realm of possibility.

Did YOU work the 2016 Sweepstakes phone contest?
Did you manage a section sweep?
Is WQ6X in YOUR log?
Posted by WQ6X at 10:07 PM