For CQP, during the last 6 years, I have teamed up with N6GEO for various operations;
3 expeditions to Modoc county, a boat operation on the Sacramento River, an operation from
Contra Costa County setting a county record (2014), and our 1st operation from his Twain Harte
cabin in 2015 as W6E, during the CQP 50 Gold Rush event. 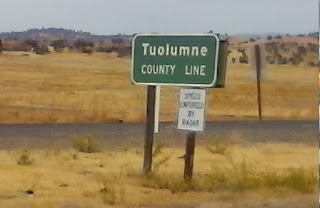 This year George had vacation plans leaving for New Orleans on October 1st, so he offered up his cabin for another WQ6X expedition.


In preparation for us running as
a Multi-2 operation I had already reserved the W6K callsign; a call
I have used during the November Sweepstakes in years past. 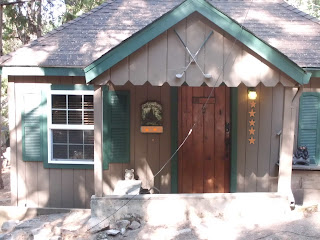 No sooner had N6GEO offered up his cabin, I received an e-mail from the contest committee pointing out that Mariposa and Madera counties had no planned operations and would I be up to operating from one of those counties.

I wrote back explaining that I had a cushy cabin waiting for me and asked
if they could find me a place to operate from one of those counties. I never heard back from my query so Twain Harte it was.

A drive was made to the Twain Harte cabin on Thursday, Sept. 29th giving 1-1/2 days to settle in and throw up a couple of wire antennas in the 70' trees. As in past expeditions at this cabin (All Asian & Field Day), I operated from the huge dining room table.

For several weeks the WQ6X CQP 2016 web page (http://WQ6X.Info/CQP/CQP2016) underwent nearly daily updates as the pieces of CQP-51 all came together.  Since the contest is now over, the page has been finalized.

The W6K operation offered up an opportunity for trying out a number of equipment configurations.

The first thing I did was to put the radio and external filters more at eye-level.

This was accomplished thanks to some scrap lumber found at the construction site for a new cabin on the property.

Antenna-wise the tall trees on the property were PERFECT for running an OCFD (dipole) broadside north/south and a Cobra dipole as a 1/2-wave sloper broadside to W4 & W5 land (but with a wide beamwidth).  To make things easy the FT-1000mp was run barefoot, leaving the amplifiers in storage back in the SF bay area.


In most cases I worked
everyone I could hear. Improving the receive side of things was a better investment.

Instead of power,
I relied heavily on the radio's multiple filters
and DSP gadgets to pull the weak ones in.
Because the choice was made to run as an assisted station, having spotting access made up a little bit for lack of power, when it came time to search and pounce (S&P). Then again, because I ran frequencies so much of the time, internet access was not as
helpful as it could have been if this had  been an out-of-state operation.


As you can see the space weather forecasts were horrible.

In some respects, maybe I should've run 400 watts; easy to say after the fact.

It remains a mystery as to whether or not W6K was  ever spotted on one of the DX reflectors.

From time to time a flood of stations would show up, however I couldn't be sure if they randomly found W6K or if they had assistance.

While the space weather forecasts were HORRIBLE, the nearby hills attenuating signals were tempered by an overall very low background noise and very little RFI from nearby cabins.

In years past I usually am still in station setup mode. However this year because all day Friday was available
to set things up, I was ready to go at 02:00z only to find virtually no one on during the exercise.

After working two stations, the only reply to the "CQP Test" call on 7032.32 was someone who would send "N-U-T-S" in the pause between CQ calls; I guess he was even more bored than I was.

On SSB the only station heard was KK6NON (one of the SSB operators from NX6T). After a brief QSO
we gave it up allowing me to switch over to final log preparation with N1MM+ software in order to be
ready for 9am Saturday.

After working the majority of available stations on 80, a chance look at 160 meters found it was possible to tune the Cobra on top band; not a great SWR, but low enough to be heard. Stations worked included a handful of locals as well as Modoc county and Montana - not bad for off the back of the sloper.

After 80-meters finally ran out (transl. everyone went to bed) it was time to call it quits at 07:30z.
With some good sleep, the OP chair was back in action by 16:00z (9am); 24 hours after CQP had started.
The final 6 hours of CQP are always a mixed bag. Sunday is an "off the air" day for some operators and an
"on the air" day for others. 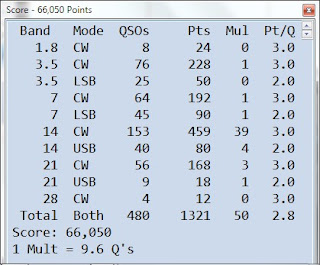 For W6K, Sunday turned out to be largely a CW operation on 15 & 20 meters until 21:40z when the switch was made to 40-meters to run a frequency (7231.31), up to the end of the contest.
In retrospect the switch to 40 meters should've happened earlier, but 3-point CW QSOs are just too lucrative to pass up for only 2-pointers on 40 SSB.

QRM-wise, other than the guy sending "N-U-T-S"
on 40 CW Friday evening, there was very little intentional QRM on the band compared to what is usually encountered during many CW contest segments. Some "data churning" (7.050.94) was encountered at 00:33z but it seemed to be in its own world; and everyone seemed to work around it. 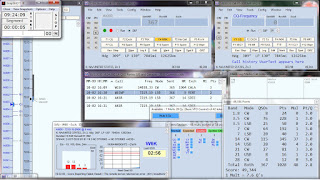 By contest start the CQP county map eventually listed several stations from Tuolumne County altho I only managed to
work the multi-OP N6G station Saturday evening.  In the single-OP category I think I bested all the other Tuolumne stations.
Based on log submissions to the 3830 Scores website, it would seem that I have taken 1st place in the Single-OP assisted expedition category.

The BiG disappointment in this year's CQP was in working only 50 out of the 58 multipliers. George and I have never made a multiplier sweep, but we HAVE made it to 56 out of 58 - I guess there is only so much a single-OP can do in 24 hours of operating time. For me the notable misses were AK, DE, ND, NE & SC. The "difficult" VE provinces were easy, whereas VE2 & VE4 were not to be heard in Twain Harte.

While I missed running as a Multi-2 (N6GEO and I make a good team), having the cabin to myself allowed for lots
of relaxation before and after the CQP GiG.  Overall, the event was a LoT of fun; despite the poor space WX.