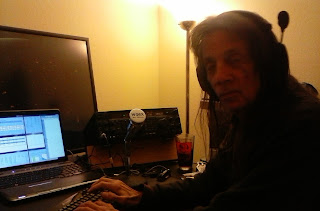 For Sweepstakes phone this year, at the last minute I decided to run as Single-OP Assisted.
In retrospect, I should have run the CW Sweepstakes as assisted.  Running a low power operation with marginal antennas, I need all the assistance I can get.  Unfortunately, having assistance is no guarantee of improved success.  Knowing what frequency a needed multiplier is on does no good if propagation doesn't support that path. 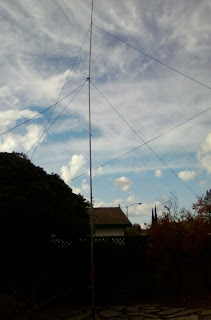 As I did in the CW Sweepstakes, operation was from KK6YRL's QTH in Concord, Ca.  I used the same HF2-V and Cobra Inverted Vee used in CW Sweepstakes.
While the A & K solar indexes were extremely low,
the atmospheric noise was very noticeable; especially
with the HF2-V.

Using the IPO feature of the 1000MP compensates for the noise increase somewhat, while running the eDSP contour control through its settings is often enough to "pop" a voice up above the noise level long enough to copy the exchange information.

Compared to the Elecraft K3, this is much easier to accomplish quickly thanks to a contour control with
detents giving me tactile feedback, even when not
looking at the radio. 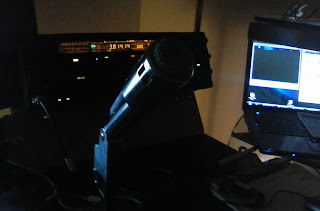 Because this was a voice contest,
I had to make a decision as to which microphone will produce the best results: a classic Electro Voice 664
or a Heil HC-4 headset.  Saturday morning during testing I happened across a station who suggested that
the EV-664 had more punch.


Then again, thanks to the 1000MP's transmit audio eDSP & speech processor, my signal possessed an incredible punch, considering the power and antenna configuration.

On the receive end of things the eDSP contour facility brought unintelligible signals through,
time and again.  Comparing this facility with the Elecraft K3 equivalent is a no brainer; the
1000MP wins, without question.  Compared to the Yaesu, in my opinion the K3 Shift/Width
and DSP adjustments cannot quickly bring a signal through.  Unlike the K3, the 1000MP
uses real knobs to accomplish these functions.

One of the reasons I am now using the FT-1000MP is because of its dual-receive capability.
While calling CQ on a given frequency I used the Yaesu's sub receiver to look for multipliers.
Quickly switching VFOs allows me to work the station immediately or store it in the band map for calling later.  Because I was running as assisted, I was able to make use of internet spots to load up the bandmap for later S&P (Search & Pounce) action.  Then again, if I wait too long, the station may well have changed frequency. 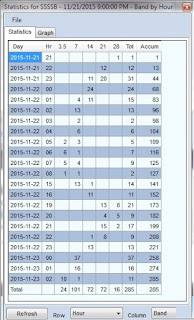 In general, conditions were way down this year.
I know it is a slow time when my contest CQ call is
answered by KP2, KH6, KP4 , VY1 & VY2 stations.
Unfortunately, I was unable to work obviously easy
sections such as IN & SFL - wassup with that?

This year 73 sections marked my lowest multiplier total in years.  Because I worked everything that I heard, I attribute missing those 10 sessions to not being on the right bands at the right time.

One of the most important factors towards success in Sweepstakes is to know which bands to be on at what
time and whether to run a frequency or search and pounce.
Of course this is all influenced by the SFI numbers and actual propagation conditions, which this year changed suddenly numerous times. 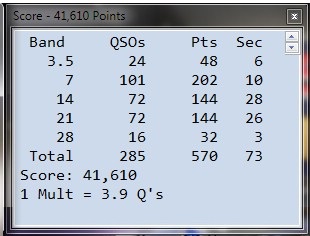 Band-wise, 10 meters was almost a no-show and 75 meters wasn't much better.

Because this was a domestic contest it is not surprising that 40 meters yielded the largest contact total.


This year, voice-keying was quite a challenge.  Attempting to run the laptop sound into the microphone line resulted in a weird feedback loop in which the CAT control polling showed up as
a ticking noise in the transmit audio.  To resolve that I used a separate laptop to play the .WAV files
for transmission.  Unfortunately I then had to key that laptop separately as there is no way to link the N1MM function keys across laptops.

QRM-wise, there was the usual bevy of tuner-uppers and microphone testers.
There was a weird "WHOOSH"ing noise on 7187.78 and a number of Fft-Fft-Fft sounds
across the band.  There was also a visit from the Woodpecker radar.  Because we often
operate Sweepstakes above 7.200, we then get to dance around the numerous broadcast carriers.  Sometimes the best place to operate is zero-beat with a broadcast carrier that has weak audio. 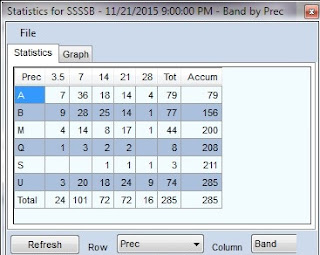 For Sweepstakes 2015 I was amazed
at the number of East Bay stations on the air; nearly twice that of the CW Sweepstakes.  Despite the activity, it looks like I am the top station in the low power assisted category; altho we will not know for sure until next year. 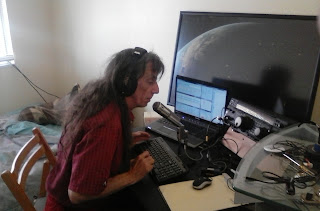 I was pleased to hear over a dozen
YL operators this year; YL's add variety to the operating experience.   On CW, unless we know the operators behind the callsign there is no way to determine YL's vs. OM's.


Did you participate in this year's Sweepstakes phone contest?